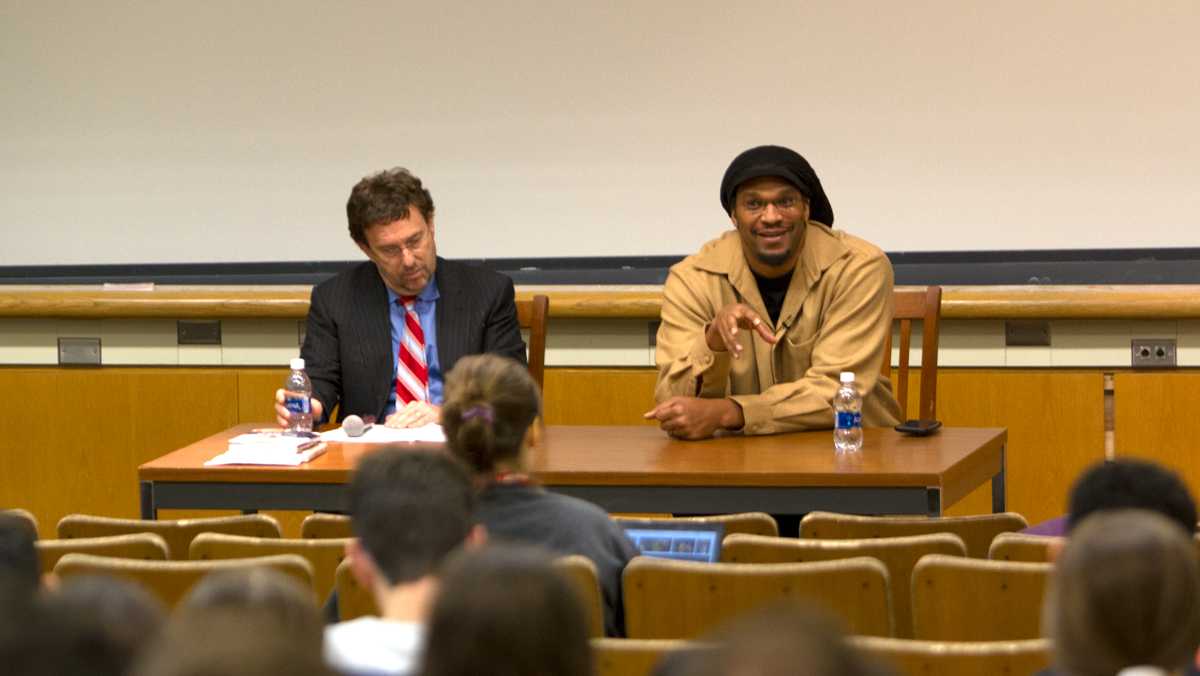 In 2005, former NBA player Etan Thomas was known for speaking out against the war in Iraq. He said he didn’t understand the connection between going to war against Iraq and the 9/11 attack, but when he spoke, it led to controversy.

“I’m playing for the Washington Wizards in the nation’s capital, so I got a really strong reaction from it,” Thomas said. “The way that it was framed was that ‘If you aren’t on board with the war, you’re anti-American and you’re with the terrorists,’ and I chose to speak out about how wrong it was. When you speak out, you have to be able to take any kind of reaction.”

Thomas spoke at Cornell University on Feb. 27. He played in the NBA for 11 years as a member of the Atlanta Hawks, Oklahoma City Thunder and the Washington Wizards. He was awarded the 2009 Dr. Martin Luther King Jr. Foundation Legacy Award and the 2010 National Basketball Players Association Community Contribution Award for his involvement in social justice advocacy.

Thomas said he thinks the recent spark in political activism from athletes is due to police brutality. He said that the increase in activism began to start when Colin Kaepernick, former San Francisco 49ers quarterback, started kneeling during the national anthem.

“I saw it as being the catalyst, and it really pushed athletes to really start speaking out,” Thomas said.

Thomas said that sometimes people view athletes as being different from regular people and that issues like police brutality and other social issues don’t affect them.

“People usually think that athletes are in this little bubble,” Thomas said. “They think, ‘You’re not really affected by any of this; you’re different black people,’ and that’s how people view athletes. But now, hearing athletes say something about it, it resonates a little differently with people.”

Thomas said athletes using a strong platform to voice their opinions regarding political issues is an opportunity all athletes have.

“There’s so much power in the athlete voice,” Thomas said after the event. “At the high school level, college level or professional level, you’re seeing athletes using their voices all across the country, and across all different sports, and it’s beautiful to see.”

Thomas came to Cornell after speaking Feb. 26 at Syracuse University. Lawrence Glickman, professor of history at Cornell, organized the event and said he follows Thomas on Twitter, and through social media was able to contact Thomas to come and speak.

Glickman said he got the inspiration for this event from his class: Sports and Politics in American History. He said that last year, he brought in scholars to talk to his students about how sports and politics overlap but said that it would be better for the class if a former athlete came and spoke.

“It is different from someone like me; I’ve never been an athlete who has risked maybe losing endorsements or being punished by a league or anything like that for expressing my opinions,” Glickman said. “He has, so I think it will be very exciting to have someone who has been in the trenches like he has.”

“It was interesting because from the outside, we can get a sense on how the media spins a story and the message that gets communicated secondhand,” Glasser said. “But to hear it from someone who’s been doing it throughout his career and to learn how he has been approaching that was really cool.”

Thomas said that years from now, he thinks people’s reactions to athletes’ political criticism will be looked at differently than it is now.

“People love Muhammad Ali now, but they didn’t love him back in the ’60s when he was speaking out about the Vietnam War,” Thomas said after the event. “When you look 30, 40 years from now, I think people are going to look at Kaepernick a lot differently, and it will be a lot more positive.”