After warming up with the punching bag and speed bag, he enters the main stage — the ring — where he partakes in mitt workouts with Danny Akers, head coach of the gym. Davis circles the arena and unloads punch after punch, booming when he makes contact with one of Akers’ mitts.

During his freshman year, he was a member of the Ithaca College wrestling team and was only boxing for fun with members of the club on campus called the Ithaca Defenders, of which he is a co–founder and the current vice president. Inspired after sparring Oct. 31 with Vinnie Denierio, a local amateur fighter, Davis said he  decided to take a leap and box competitively.

“I’m in love with this sport,” Davis said. “That’s all there is to it. … It’s not just something I think is interesting for a little bit and I’m just going to put down. Like, I really have a passion for this right now.”

Akers said that when he first met Davis, he was most amazed at Davis’ demeanor when it came to boxing.

“I liked his attitude,” Akers said. “That pretty much convinced me. Looks are deceiving. Anyone can be built and look like [a boxer], but his attitude is what impressed me — just the fact that he jumped in there, he does everything that I ask him, and he always wants to do more.”

Davis said he is primarily focused on his first fight as an amateur — which Akers said will be scheduled for sometime in February — and achieving his ultimate goal: becoming the 2018 New York Golden Gloves champion. 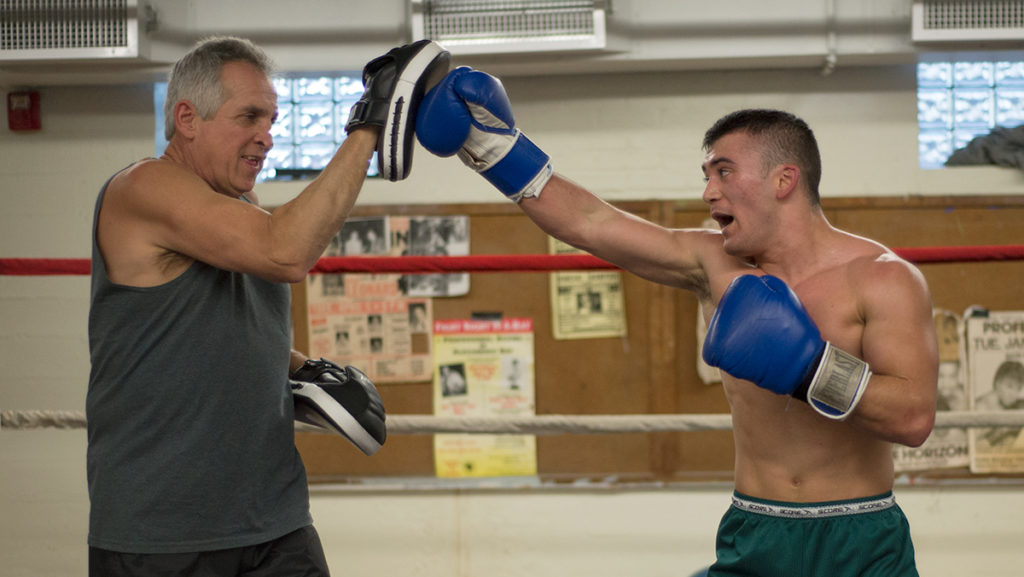 Before boxing, Davis wrestled for the Bombers in the 125-pound weight division. He only started wrestling the summer before he entered his freshman year of high school at Blair Academy in Blairstown Township, New Jersey, one of the top-ranked high schools in the nation in wrestling.

He also lived in a household in Newton, New Jersey, that bred top-notch wrestlers who went on to compete at high collegiate ranks. Two of his uncles wrestled at Blair Academy and went on to wrestle at the Division I level at Lehigh University and Old Dominion University.

When he arrived at the college, Davis said, the college wrestling scene was a culture shock, and he knew he needed to become acclimated swiftly.

“I was always stronger than all of my opponents,” he said. “And I got to college, and it became much less about strength than it was about technique, and my technique, honestly, was pretty lacking. I was working very, very hard at getting my technique better, and then, just like that, my progress goes to a complete halt.”

Davis suffered a concussion during practice a week after the Ithaca Invitational during the 2014–15 season. He endured another one during another practice 2 1/2 months later. He said he took more notice of the second concussion than the first one.

“I just remember there was this white flash, and then right afterwards, it was like I had just ran 5 miles full speed,” he said. “That’s how fatigued I felt right after that.”

Davis took a month and a half off to recuperate from the two concussions before he returned to the wrestling mat. However, during a practice, he fell on his head during a drill, and the white flash crossed his eyes once again.

At the end of the season, head coach Marty Nichols and athletic trainer Jess Anderson urged Davis to stop wrestling to prevent further damage to his brain, which he agreed to.

Davis said he enjoyed wrestling but recognized that the drive he had for the sport did not have the same ginger as it does now when it comes to boxing.

“Before a wrestling practice, all I can think of is, ‘Ah, it’s going to feel so good when it’s over,’” he said. “Maybe not every single day, but there were a lot of days where I wasn’t that excited to go wrestle. Before a boxing practice, all I can think of is how I’m going to move to land that punch. There’s not a day so far that I haven’t thought, ‘Ah, I have to go box now.’”

Davis said the transition from mat to ring was effortless. He said he has been hitting a heavy bag since his days as a 16-year-old in his basement in Newton, although he said he had no idea that he would go down the path of amateur boxing.

Once he stopped wrestling, Davis began to lift weights and hit the heavy bag on a more consistent basis. He said it felt natural to him, throwing jab after jab at the bag, even though he was aware his technique was quite raw.

Simultaneously, Davis said, he trained with his friend junior Jordan Babatunde, the president of the Ithaca Defenders, who is also training with Akers, after club meetings.

“He is very fast; that’s for sure,” Babatunde said. “But being that he is a wrestler, he definitely knows how to move around.”

Since slipping on the mitts, Davis said he has received some flak as well as some perplexed looks from his peers over the fact that he is now competing in a sport that is assumed to be more concussion-prone than wrestling. But he said he knows what he is getting himself into.

“My new response is, ‘Hey, I’ve been hit in the head a few times in the sport. Hasn’t really shown any effects yet,’” he said. “‘The moment I realize that my academic work is suffering because I can’t think straight, that’s the day that I quit. Until that, though, I’m going to try my goddamn hardest.’”

Babatunde said he was a bit concerned when Davis told him that he was going to box competitively but that he is confident that Davis will avoid any further serious harm to his head.

“I was worried, and I told him, “OK, if you plan on doing this, we’re going to definitely work on your head movement so you don’t get hit in the head,’” Babatunde said. “He’s not a really heavy guy, which means he’s not going to be fighting heavy guys. So the likelihood of him getting hit and getting just completely destroyed are a lot lower.”

Akers said it is too early for him to tell if the concussions will be an issue since he and Davis have only been training for a couple of weeks. However, he said Davis has been hit in the head and knocked down during sparring sessions and has hopped right back up on his feet.

Davis made it clear that he is only taking this as far as the amateur level; however, he said he is interested in becoming a boxing coach down the road.

“The club definitely helped me realize that because I’m not a certified coach, I want to be soon,” Davis said. “But just working out with the people, showing them the very basics like the things that I have down pat … I have almost as much fun doing that as I do actually hitting.”