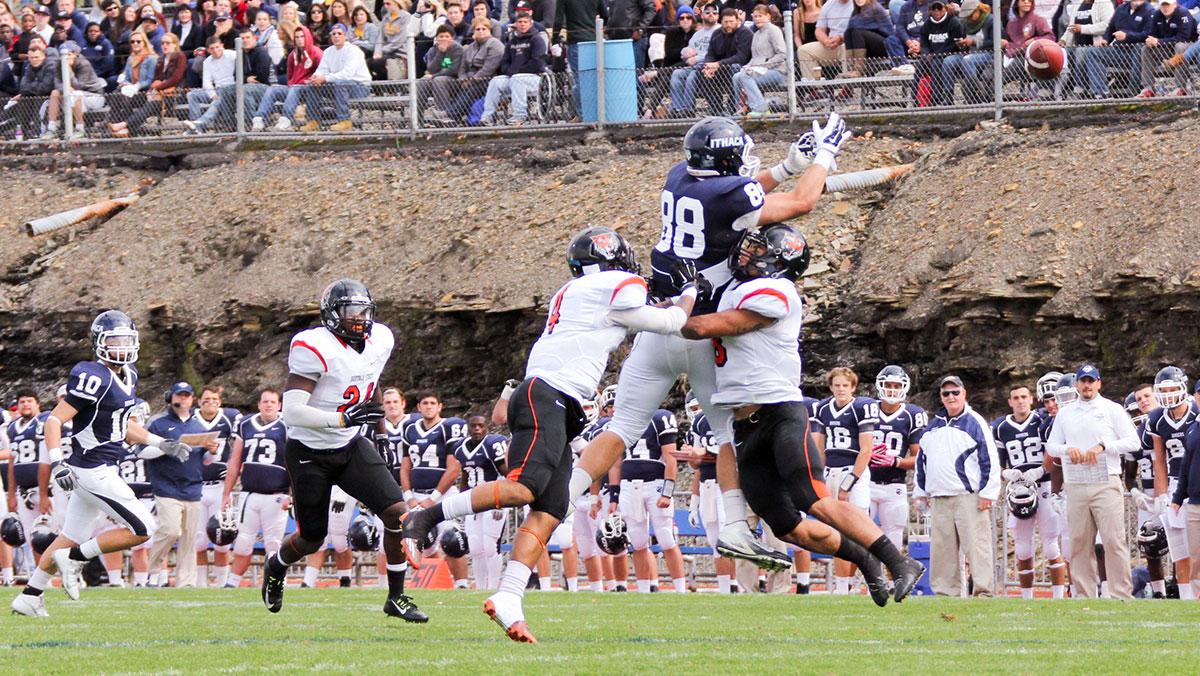 The football team (4–2, 3–2) celebrates Senior Day by hosting the Salisbury University Sea Gulls (4–2, 3–1) at noon this Saturday at Butterfield Stadium.

After embarrassing themselves in Maryland by losing to Frostburg State University, the Bombers are on the brink of elimination from postseason contention. A Blue and Gold loss would make it impossible for them to earn an automatic bid to the NCAA Tournament, and no three-loss team has ever earned an at-large bid to the tournament.

In order to avoid elimination, the Bombers are going to have to execute on defense more consistently than they have in the past two weeks. The most egregious defensive miscues of the season came against Frostburg, when the secondary gave up an 80-yard completion to the Bobcats on a third-and-10 at their own 7-yard line and followed that up by giving up the game-tying touchdown on a third-and-goal from the Bombers 19. Defensive coordinator Mark McDonough took the blame for his team’s mistakes.

“I have to be a better coach, that’s what it comes down to,” McDonough said. “I have to get the guys in better spots, and I have to call better plays.”

McDonough’s defenses have successfully contained the Sea Gulls’ option offense in each of the past three meetings. However, anytime an option offense plays at Butterfield Stadium, the dominant narrative has been the offense’s inability to execute because of the grass surface. When the Bombers upset the Sea Gulls in 2012, the wet grass was seen as the reason the Sea Gulls rushed for more than 100 yards fewer than their season average. The dreary weather in Ithaca may make conditions sloppy again.

Ultimately, if the Bombers want to contain the Sea Gulls’ offense this year, they are going to need more than just poorly drained grass. The mental mistakes on defense combined with a growing inability to stop mobile quarterbacks function as a recipe for disaster.

Salisbury junior quarterback John Dunbar has improved throughout his first full season as a starter and pivot point of the option offense. Since Dunbar has to choose who will run the ball on a majority of the plays, the fact that four players have recorded 100-yard rushing games so far this season is a testament to his ability to find the player who can be the most productive in a given situation.

Dunbar’s main options will be sophomore tight end-turned-superback Connor Canonico, who is averaging more than 10 yards per carry in the past two games and his two slotbacks: junior Jerome Johnson, who rushed for 148 yards in last week’s win against Hartwick College and sophomore Aaron Moore, who has eight rushing touchdowns this season. Grass and mud will not stop this run offense.

The Bombers are leaving points on the board. Senior kicker Garrett Nicholson’s missed 22-yard field goal in the first quarter of the game against the Bobcats on Oct. 18 wound up sending the game went into overtime. Nicholson’s miss against Frostburg and senior quarterback Tom Dempsey’s end-zone interception and fumble on the 1-yard line against Buffalo State College on Oct. 11 highlight the Blue and Gold’s trouble scoring in the red zone. Through six games, their red zone scoring percentage is at 69 percent, down 14 percentage points from last season.

Additionally, the Bombers already have nine instances in which they have failed to score after crossing the opponent’s 20-yard line, two more occurrences than all of last year. Head coach Mike Welch noted the turnovers as being the key factor in the Bombers’ red zone issues.

How to Save the Season

The scenario for the Bombers to make the postseason is not that complicated. They need to win the next three games and Buffalo State College to lose two more games, since the Bengals own the tiebreaker over the Bombers because of their victory on Oct. 11. The Bengals (5–1, 3–1) host the Utica College Pioneers (4–3, 2–3). Both the Bengals and St. John Fisher College know that they can clinch a spot in the playoffs by winning the rest of their conference games. The Cardinals (5–1, 4–1) play at Alfred State College (2–4) in a non-conference game that should be competitive by definition only.