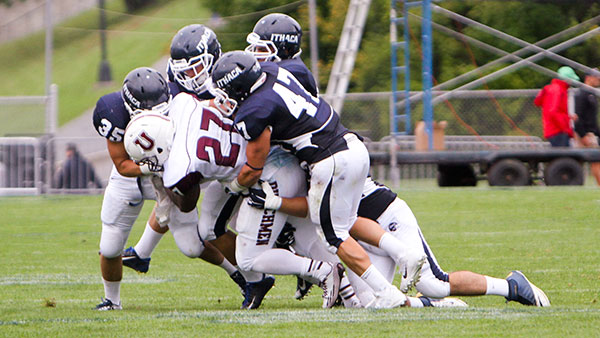 The football team, 1–0, begins its Empire 8 season at 1 p.m. this Saturday at Butterfield Stadium as it hosts the Hartwick College Hawks, 1–1.

Preventing History From Repeating Itself

For the Bombers, last season’s turning point came in this matchup. The Blue and Gold fell behind 21–0 to the Hawks and saw quarterback Phil Neumann ’14 leave the game with an elbow injury. Then-junior Tom Dempsey threw two interceptions as the Bombers eventually lost 21–9. The South Hill squad, spurred on by an improved Dempsey, would go on to win its next five games and clinch the conference title.

A year later, the Hawks’ identity remains the same. Junior quarterback John Garcia is a dual-threat and leads an offense that can score quickly and often. If Dempsey has time to throw, he will find the Hawks’ defense to be porous. If he does not, he could end up being forced out of the game, just like Neumann was in each of the previous two meetings. Coincidentally, Dempsey replaced him on both occasions.

A Greater Test for the Defense

Union College senior running back Darnel Thomas’ 169 yards rushing in the season opener were the most any running back has had against the Bombers since Cody Miller ’14 rushed for 208 yards for St. John Fisher College on Oct. 20, 2012. There is a fluky element to Thomas’ success since 82 of his yards came on one carry. However, the fact that an opposing team’s running back has already had that type of success against the Bombers’ defense is particularly disconcerting because the defense is going to face better running backs. One of them is Hawks senior Greg Bell, who rushed for 331 yards in last week’s loss to Morrisville State College.

It does not get any easier for the Bombers defending the pass. Hawks junior wide receiver Tanner Williams was a second-team, All-Empire 8 player last season and can easily record 10 or more receptions in any given game. Williams has a good chance to do that on Saturday as starting cornerbacks Sam Carney and Malik Morris are struggling to return to full health. Carney’s status has improved throughout the week as he continues to recover from an ankle injury suffered a week before the season began, but he was limited to a few reps with the defense. He also did not practice returning kickoffs, so it is unlikely he will be fully available for Saturday. Morris was also very limited in practice and is unlikely to play on Saturday.

The injuries that limited senior wide receivers Vito Boffoli and Joel Lynch’s game time against the Dutchmen may have been a blessing in disguise for the Bombers. Sophomore Andrew Tabbert and senior Chris Bauer led the team with four and three receptions, respectively, against Union. Junior tight end Kyle Hastings also established himself as an option over the middle with two receptions for 64 yards. All three players, as well as Lynch, are above 6 feet tall, which allows senior quarterback Tom Dempsey to stretch the field with more vertical passes. Tabbert said having wide receivers of different sizes works within the Bombers’ offense.

“We usually keep our big guys outside and have [Josh Oliver] and Vito on the inside so they can make moves on the linebackers and get open that way, and have our big guys make plays down field,” Tabbert said.

This Saturday’s game presents a great opportunity for Dempsey and his new receiving corps to have a breakout performance as they face a Hawks secondary that has already given up nearly 600 passing yards and seven passing touchdowns through two games. Additionally, five of those passing touchdowns were from 20 yards or longer. While the Bombers would be smart to test the Hawks’ secondary, they do need to be mindful of the fact that the Hawks ran back two interceptions for touchdowns last week.

The nine-week, eight-game gauntlet that is the Empire 8 conference schedule begins this Saturday with the Courage Bowl being the notable matchup of the week. The No. 9 St. John Fisher Cardinals will travel to SUNY Brockport in what is the 10th edition of the game, but the first one to feature the Cardinals and the Golden Eagles. It is Brockport’s first Empire 8 game, and it hosts a Cardinals team that is expected to win the conference and go undefeated in the regular season. These two teams will regularly contest the Courage Bowl raising funds to benefit Camp Good Days, which serves children and families affected by cancer.