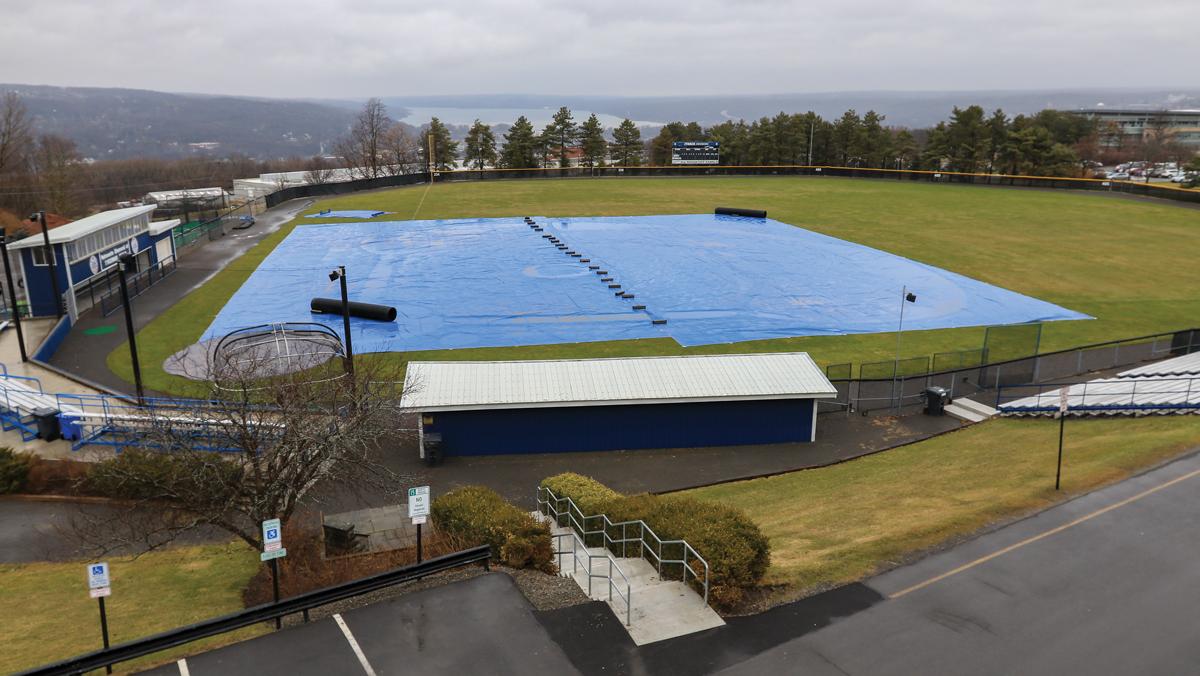 Baseball, unlike most sports, is weather-dependent. In football, it doesn’t matter if there is a frozen tundra outside or a muddy slush on the ground — the pigskin still gets tossed around. Baseball, however, is a game that necessitates clean conditions.

Those conditions have been hard to come by for the Ithaca College baseball team. For much of this season, and many before, Freeman Field has dealt with water drainage issues, producing lackluster playing circumstances and postponed games. One home game has been postponed this season due to poor field conditions, and two others were postponed due to poor weather.

Head coach George Valesente said the outfield has suffered far more from the drainage issues than the infield. He said water has accumulated the most in right and left field, resulting in pockets of standing water forming and fly balls landing and getting stuck in the ground.

“If it’s a fairly heavy-moisture kind of a spring, the water seems to sit there and it becomes very sloppy and muddy,” he said.

Junior infielder Jake Generali said that though the conditions are not ideal, players just need to acclimate and play their best.

Valesente said the team had to reschedule games in past seasons because of unplayable field conditions. Sometimes, these games are ultimately never played.

Valesente said logistical issues arise when rescheduling games. If a game is postponed, buses and departure times need to be rescheduled, and hotel reservations need to be changed.

When the team is unable to practice on its field, it practices indoors in the Athletics and Events Center.

Valesente said the issues with draining the field have been a problem for the past five years. However, Ernie McClatchie, director of facilities, grounds and transportation, said this is more of a recent predicament.

McClatchie said the drainage issues are because of the severe weather occurring this spring.

“We’ve had a substantial amount of water over the course of the spring,” McClatchie said. “We’ve also had temperatures that have not allowed for a lot of drying to occur.”

He said there could be a problem with the field’s drainage system, but an inspection of the system would need to be conducted first. He said field conditions like these are a byproduct of playing in the Northeast weather, which is an impediment for baseball and softball teams.

“There’s a major disadvantage to teams in the [Northeast],” McClatchie said. “Baseball and softball teams in the Northeast, when you don’t have spring break and you play teams from the South and the West … they’ve already played 10 full games and it’s your first game because you can’t go outside, that’s a big deal.”

He also said the softball field has not dealt with drainage issues because of its location on top of the hill between the Circle Apartments and the Terraces while the baseball field sits below Butterfield Stadium.

“Because it’s located next to the woods, it’s shaded quite a bit from the woods, so that field will hold the frost in the ground a lot longer than some do,” McClatchie said.

In terms of working around the weather issues of Northeast baseball, Valesente posed two solutions. One was for the NCAA to consider pushing back the playoffs and the national championship to a week or two after final exams week. The other was the installation of AstroTurf.

“Turf melts [the snow] faster because of the black and rubber granules they put in [to] absorb the heat quicker. … I don’t think you have to worry about any freeze because it’s dug well-down 3 feet,” he said. “It can rain, rain, rain, rain, rain, and a half an hour later, you’re playing.”

McClatchie said there have been discussions in the past about installing AstroTurf on the baseball field.

“There’s a substantial amount of resources that have to be dedicated to do something like that,” he said. “They’re pretty expensive to do.”

Baseball holds on to upset No. 24 Oswego State