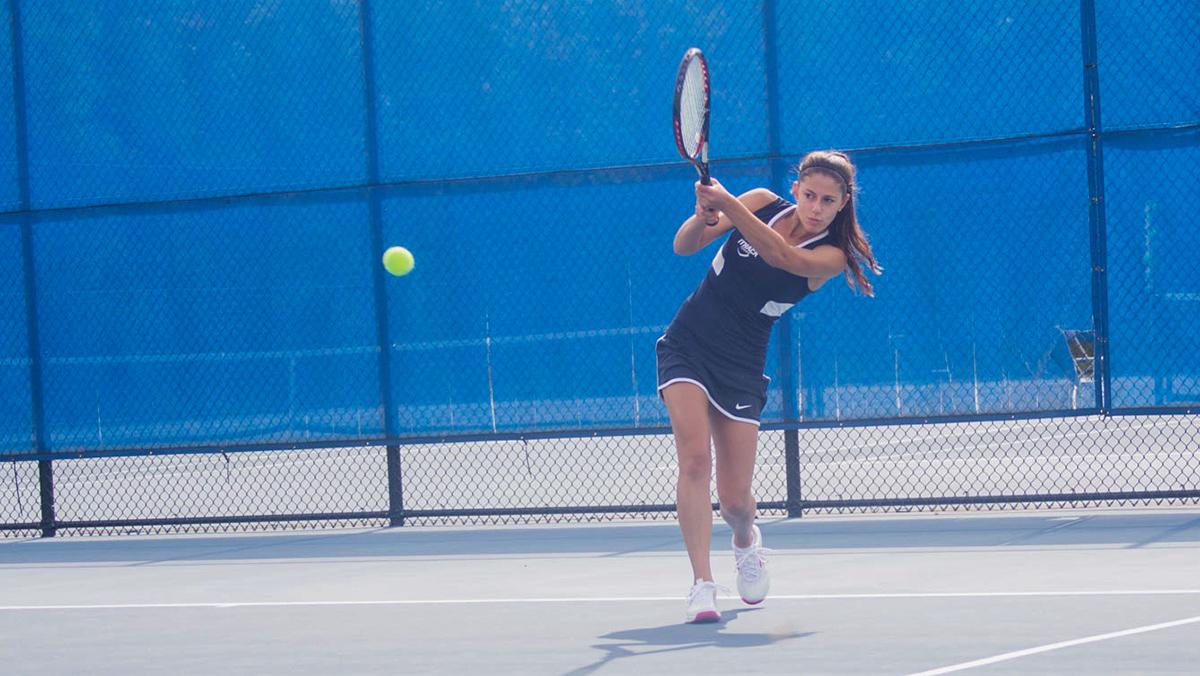 Though Brianna Ruback, a freshman on the Ithaca College women’s tennis team, has been playing tennis competitively since she was 13 years old, this is the first time in her career she is playing in doubles matches.

Despite this, Ruback is currently the Bombers’ No. 2 singles player and plays consistently in the first or second flight of doubles. She is 5–2 overall and 3–1 in regular–season matches so far this season.

From River Vale, New Jersey, she started playing tennis first in clinics during elementary school, then competitively in the eighth grade and continued throughout high school. In high school, she played in first singles and was selected to First Team all-league honors all four years.

This season, for doubles play, Ruback has been paired with sophomore Taylor Ginestro and senior Haley Kusak, winning with both partners.

Senior Maddie Overholt said Ruback’s work ethic is impressive and that she has great potential. She said Ruback has been doing a great job adjusting to the collegiate competition level, which is always a hard transition.

“She’s a hard worker, always puts in 100 percent,” Overholt said. “She’s always someone you can count on.”

Against Utica College on Sept. 7, she played at first singles and defeated her opponent 6–0, 6–0. In the Mary Hosking Tournament, she made it through the first two rounds to the semifinals before being beaten by Rochester’s Sravya Gudipudi.

Ruback said she is enjoying traveling with the team to matches since all of her matches in high school were nearby. She also enjoys the family-like feel that comes with being on a team.

“I really like the camaraderie of playing on a team,” she said. “That’s what I like the most in general, just being on a team.”

Head coach Bill Austin said Ruback is going to keep getting better and stronger and become a more complete player.

“With her work ethic and her talent, she’s just going to keep getting better with more competitive opportunities,” he said.

Overholt said Ruback has been playing consistently all season.

“They had really good rallies, but Brianna always had one more ball,” she said.

Ruback said her goals are to improve her fitness and her doubles game, as well as all aspects of her playing.

“I want to help the team win the conference championships and qualify for the NCAA’s,” she said.