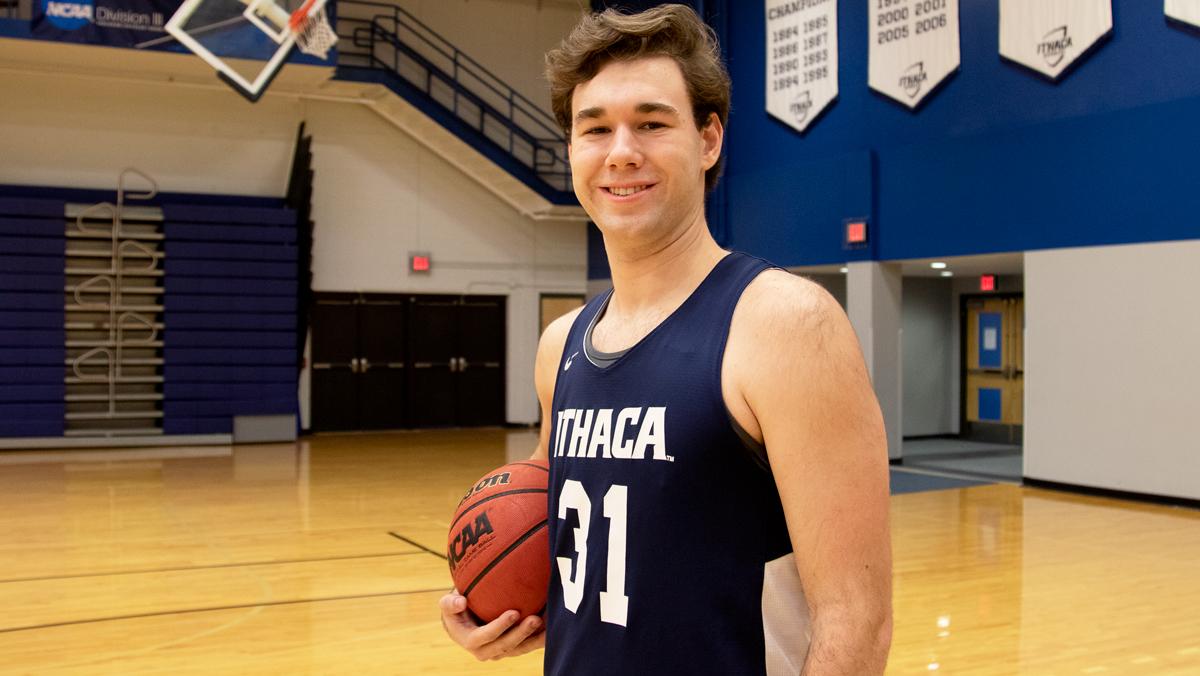 Before taking the court for the Ithaca College men’s basketball team this season, freshman forward Jack Stern competed twice for Team USA at the Maccabiah Games in 2017 and 2019.

The Maccabiah Games are an Olympic-style tournament for exclusively Jewish and Israeli Arab athletes around the world. The Games were founded in 1932 and offer 45 different sports. Stern won a gold medal with the U-18 junior team in 2017 and another in 2019 with the open squad.

Stern went through an application and tryout process, after which he was selected to represent Team USA. He said that playing in the games gave him experience with a higher caliber of play while still competing at the high school level.

The 2017 games were played in Israel, and Stern’s older sister, who is a sophomore on the Widener University basketball team, competed for the United States’ women’s basketball team. The trip to Israel was a family affair for the siblings and their parents, who all came to support. Stern said that experiencing the games with his sister made them even more meaningful. He also said it meant a lot to him to play the games in Israel from a religious standpoint, as Israel is considered the homeland for Jewish people. He said that it was his first trip to Israel and that competing there allowed him to feel closer to his religion.

Marc Chasin ’18 and Travis Warech ’13 competed for the open basketball team at the 2017 games as well. Travis’ brother, Zach, is a sophomore on the Bombers’ basketball team and was a big part of Stern’s decision to attend the college. Stern stayed with Zach for his overnight visit, and, Stern said, their connection over the Maccabiah Games encouraged him to choose South Hill.

“We know a lot of the same people, and it was cool listening to him talk about playing for Team USA,” Zach said.

Stern did not have much interaction with Travis and Chasin during the 2017 games, but, he said, he spoke to Chasin a little bit at the alumni game earlier this season about taking pride in the fact that the program boasts three players who have played in the “Jewish Olympics.” Head coach Jim Mullins said he is proud that so many of his players have reached that stage.

Stern became close to Zeke Blauner and Ben Leff, the only other players on the U-18 roster from the East Coast in 2017. Leff also played with Stern for Team USA in the 2019 games in Budapest, Hungary. Leff, who currently plays for New York University, said Stern has grown a great deal over the time they have played together.

“In the 2019 games, I noticed that his athleticism improved a lot and also his outside shooting,” Blauner said. “He was knocking down threes and also banging out in-games and catching lobs.”

Stern said he enjoyed his experience and grew on the court in Budapest, gaining an ability to lead.

“I had matured a couple years, and I felt a much bigger leader role in this team as I was now the oldest player,” Stern said. “When I was in Israel, I was one of the youngest players on the team, but I was the only player going into my first year of college on the team that went to Budapest. I think that helped me to excel on that team and coming into college.”

Three games into his college career, Stern has been increasingly utilized every game. He played 18 minutes in the Bombers’ win against SUNY Cortland and is averaging 7.7 points, 1.3 rebounds and 4 blocks per game so far. Mullins said that though it is early, he has been impressed by Stern so far. Stern said he could not be happier with his new team.

“Ithaca was the first overnight I took, and right when I got back, I turned to my dad, and I told him that I wanted to come here,” Stern said. “I loved the guys and the coaches and the location was just something that stood out to me all the way.”