Freshman dives into competition after switch from gymnastics 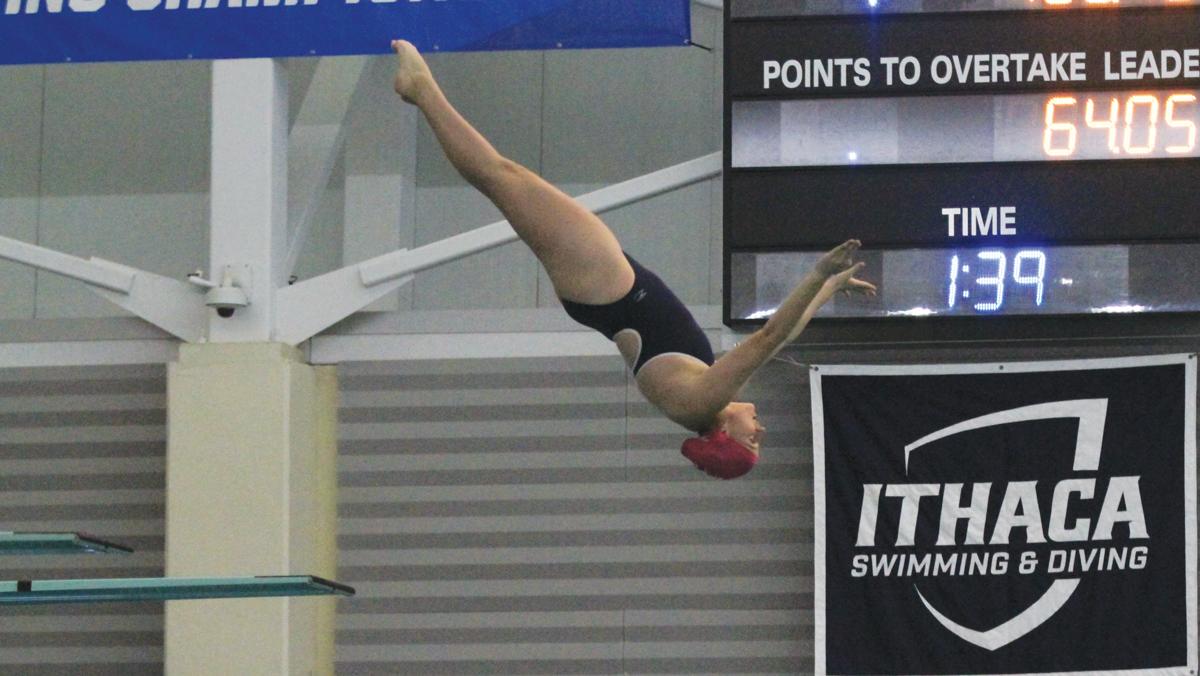 RAY VOLKIN/THE ITHACAN
Freshman diver Jocelyn Pawcio flips off the diving board at the Ithaca Bomber Invitational. Pawcio compeed in gymnastics for her entire life before switching to diving at the start of this season.
By Alyssa Curtis — Staff Writer
Published: January 31, 2018

Freshman Jocelyn Pawcio steps up to the end of the platform, mentally and physically preparing to do a series of flips and tucks and, ultimately, stick the landing.

Instead of a mat below her, Jocelyn now sees a body of water. This time, instead of planning to land on her feet, she looks to make the smallest splash possible.

Pawcio grew up as a gymnast, and she considered gymnastics when deciding to attend Ithaca College. Instead, she transitioned to diving in college because she wanted to try something new. This is a story similar to that of her sister, Kaitlyn, who now dives at Washington & Jefferson College.

Jocelyn, Kaitlyn and their youngest sister, Karalyn, began gymnastics at an early age when their mom purchased a gym, TNT Gymnastics, in Johnstown, Pennsylvania. The Pawcio family became heavily involved in the sport, and it had a positive impact on the family dynamic.

“Luckily, it grew our relationship closer just because I got to see [my sisters] in a different environment and how they work,” Jocelyn said. “I know some ways to encourage and communicate with them.”

When it was time for Kaitlyn to attend college, she said, she decided to stop gymnastics and begin diving after she suffered three different knee injuries. She realized continuing gymnastics for another four years would be tough.

The transition from gymnastics to diving isn’t as unusual as one may think. Four of the top six divers at the college started in gymnastics before transitioning over to the water-based sport. One of these divers is senior Alyssa Wishart, who earned two All-UNYSCSA honors in the 1– and 3-meter diving events last year.

Chris Griffin, assistant aquatics coordinator and diving coach, said the physicality of gymnastics can be hard on the athlete, which is why diving becomes a very realistic option as another sport.

The flips and twists divers do are different from those performed by gymnasts. Griffin said divers who come from gymnastics must unlearn certain skills, such as ways to approach certain flips that have been picked up in gymnastics in order to perfect their new ones.

Jocelyn said that while diving is different, being a gymnast for years has helped her in her transition.

“With twisting, body awareness–wise, I am very well aware of where I am in the air, although timing aspects are very different,” Jocelyn said. “With gymnastics, a lot of things are just punch–and–go right away, but with diving I am learning to be more patient rather than punching off the board.”

Griffin agrees that timing is one of the hardest parts of the transition between the two sports.

“Everything in gymnastics happens faster,” Griffin said. “The diving board has more give and power, [which requires] patience on the board.”

Thankfully, Jocelyn has Kaitlyn there to help her understand the differences between the two seemingly similar sports. Their relationship has strengthened through both the sisters’ change of sport. Through competing in the same sport for the majority of their lives, they have established a sibling competition.

“It’s a healthy competition,” Kaitlyn said. “[Jocelyn is] better at the 3-meter. I’m better at 1-meter. We each have our own strengths and weaknesses.”

Jocelyn agrees there might be some rivalry, but it is positive.

“We often kind of compare dives … sometimes even our parents and other family will compare, so there’s a little bit of tension, I think, from her side, but it’s healthy competition,” Jocelyn said. “It’s kind of natural, but it doesn’t bother me.”

In fact, the new sport has not just brought together the two sisters, but the whole family. Jocelyn and Kaitlyn’s mother, Jean Kirkstadt, was a diver before she moved to Johnstown, where there were no pools to dive in, which prompted her to start doing gymnastics.

Jocelyn has consistently finished near the top at competitions and invitationals. She helped the Bombers defeat Alfred University by taking fourth in the 1-meter dive, and she also took sixth at the Dick Comanzo Diving Invitational.

Jocelyn said that she is content with her decision to switch to diving but occasionally misses her time as a gymnast.

“Sometimes I do miss [gymnastics] … but I’m happy diving,” Jocelyn said. “It’s fun. I enjoy doing it. Gymnastics kind of seemed, for some days, like a job, and some days were better than others, of course. Every day I walk into diving, and it’s fun. It’s a fun sport to do, and I enjoy it.”