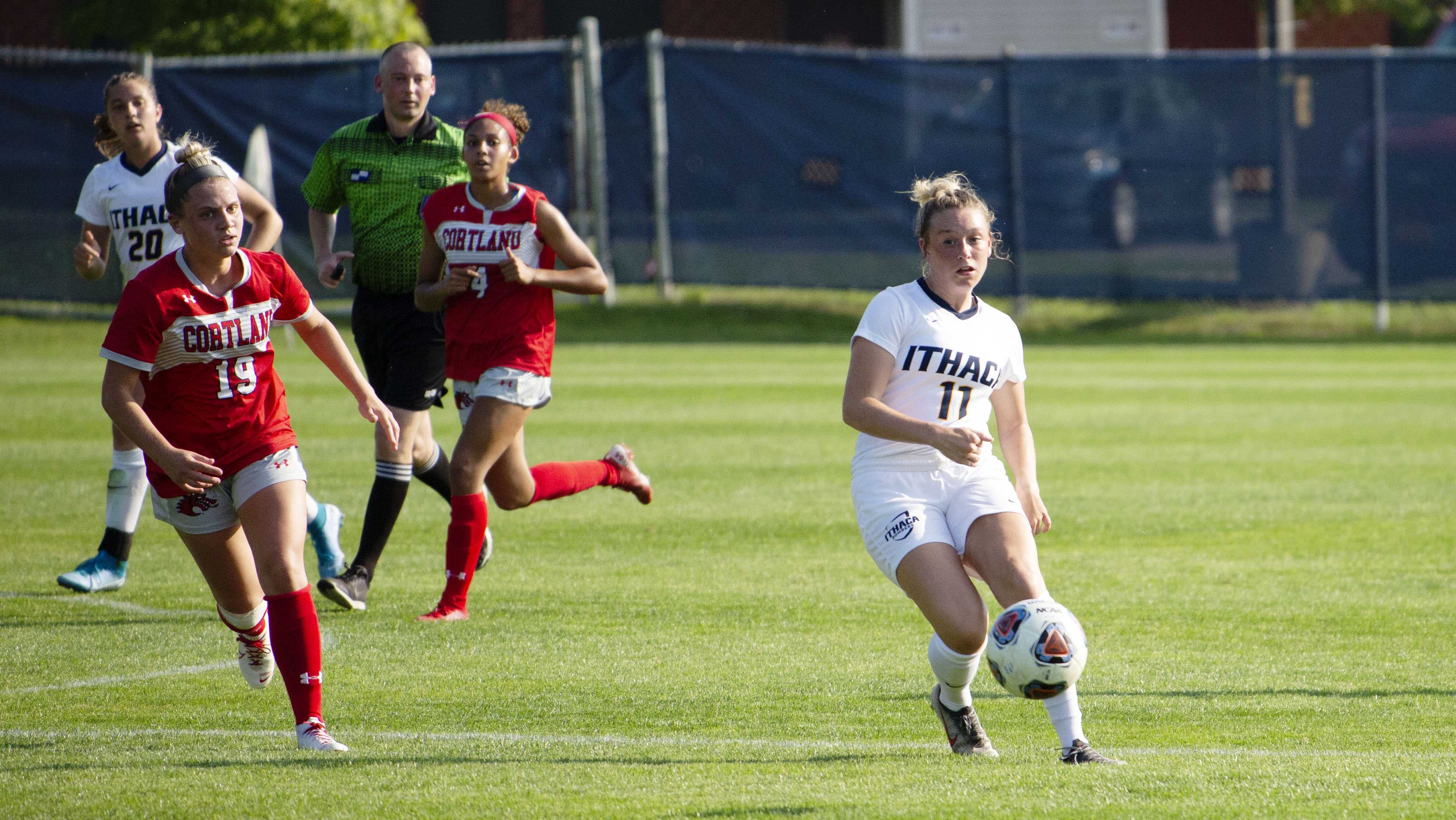 Despite being new to collegiate soccer, freshman forward Delaney Rutan has already made an impact on the pitch for the Ithaca College women’s soccer team.

Rutan scored two goals and notched an assist in the squad’s 5–1 win against Gordon College on Sept. 1 in Wenham, Massachusetts. She was also awarded Liberty League Rookie of the Week honors Sept. 3. Rutan is the only freshman who has appeared in all six games for the Bombers so far.

Rutan also stood out during her high school career at Cincinnatus Central High School in Cincinnatus, New York. She picked up First Team All-League honors four times in addition to First-Team All-State and All-CNY in her junior and senior seasons. As a senior, she was named the 2018 CNY Small School Player of the Year. She also led the Central Counties League in scoring as a sophomore, junior and senior.

Contributing writer Arla Davis sat down with Rutan to discuss her goal-scoring, her transition from high school to college soccer and the team’s goals for the season.

Arla Davis: How did you feel going into your first game of the season and of your collegiate career?

Delaney Rutan: It was really nerve-wracking, but the team as a whole is really open and makes you feel comfortable.

AD: Did the nerves go away after you scored your first career goal?

DR: Yeah, I felt way more comfortable and like I was meant to be on the team with everybody. It brought the team up since we were down 1–0. It reminded everyone that we could still push and the game wasn’t over; we could keep going.

AD: How did it feel to score a second goal within six minutes of your first one?

DR: It was really exciting. Alex [Epifani] just plays me amazing balls all the time, and so she was there to help me out.

AD: What was your reaction when you found out you received Liberty League Rookie of the Week honors?

DR: I found out from Instagram. Someone sent it to me. I didn’t really know what to think. I felt like I deserved it, in a way, but then I feel like I didn’t. My team is who got me there. I personally didn’t get myself there.

AD: Has your game changed at all transitioning from high school to college?

DR: It’s a big difference, but I feel like in high school it’s more of an individual sport, and in college, it’s more of a team thing. You have to [work] with your team to win.

AD: What has been the most difficult part of your transition into college soccer?

AD: What role has your family played in your soccer career?

DR: Everything. They have taken me to every game. When my sister started playing soccer, that’s when I started watching. I just wanted to beat her and try to be better than her.

AD: Do you have any superstitions revolving around soccer?

DR: Not really, but right before the game, whether we are traveling or at home, I just have to talk to myself — I can’t talk to anybody. I just have to be focused and completely myself. Also, Julie [Raigosa] and I have a handshake that we have to do before every game.

AD: What have you enjoyed most about Ithaca, in general, so far?

DR: Probably soccer, especially the family that we have made and the culture of the team.

AD: What are your future plans?

DR: Right now I am in the preprofessional program, but I think I want to go to physical therapy. I’m not 100% sure, but I know I want to work with athletes.

AD: What are your goals for the season?