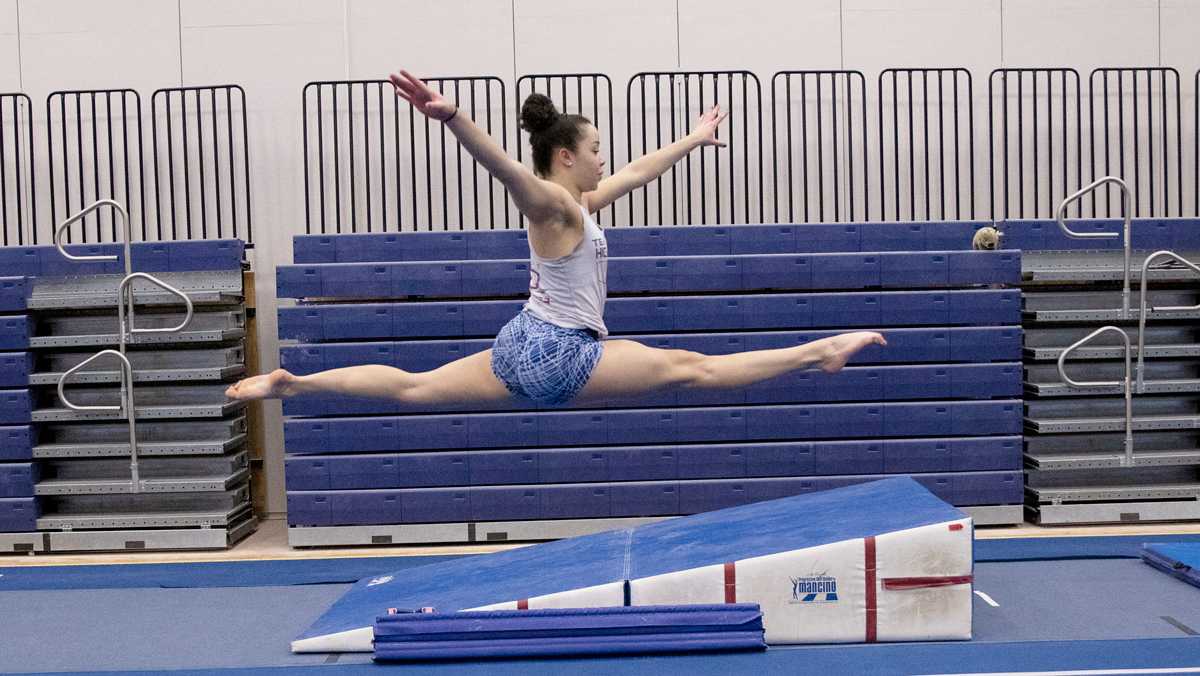 As the final notes of freshman Cameryn Nichols’ floor music played Jan. 18 in Brockport, New York, she became the first Ithaca College gymnast to complete the all-around competition since 2016 and the seventh since 2003.

The all-around is a gymnastics event in which an athlete competes in all four disciplines — vault, uneven parallel bars, balance beam and floor exercise — and receives a combined score for them. Nichols said she regularly competed in the all-around in club and high school gymnastics, and she came to the college hoping to continue with the event.

“In college, it’s a lot easier to specialize,” Nichols said. “You can help your team do really well in those certain events, but, with all-around, it’s really tough to excel and keep the energy up for all four.”

At her first collegiate meet against The College at Brockport and Springfield College on Jan. 18, Nichols posted an all-around score of 37.400, which is less than a point below Ithaca College’s all-around record. She was the only athlete from any of the three teams to compete in the all-around.

Head coach Rick Suddaby said it is rare to have all-around athletes because of the way the Bombers decide their lineup for competitions. He said only the top six athletes in every discipline are chosen to compete. To participate in the all-around, a gymnast needs to be one of the six best athletes on the team across all four disciplines. Suddaby said they do not take the combined all-around score into account for the lineup and base the decision solely on individual event performances.

Nichols said that although she was alone in competing the all-around, her teammates’ support made it easier for her to keep her energy up throughout the competition. She said that when she competed in club gymnastics, she was typically competing alone.

“I remember landing the last pass in my floor routine and hearing the entire team behind me just screaming, and that was really cool.”

Suddaby said Nichols has exceeded all of his expectations so far.

“Cameryn is a quick learner, and she’s a permanent learner,” Suddaby said. “When she learns things, she doesn’t lose them. Those things really set her up to be a good, competitive all-around.”

“She loves to perform, and she trusts herself,” he said. “She’s able to hold her focus and keep that going. She loves to compete. It’s fun for her. It’s not a drudgery or a nervous thing at all. She steps up, and that’s the kind of person you want.”

Though she said she enjoys the all-around event, Nichols said the biggest challenge is with training all four disciplines. The gymnastics team operates its practices on a three-event rotation, so Nichols is not able to practice all of her events every day. She said that while girls who only compete two events often get a rehab period during practice, she has to be working on her skills at all times.

“I do beam and bars every day, and I just switch off vault and floor,” Nichols said. “Everything works out really well in the sense that I do get to train everything, and I just have to be smart with my time.”

Nichols’ best event is currently the floor exercise, which she said is also her favorite. She scored a 9.700 on floor during the tri-meet Jan. 18. She is also strong on vault in which she scored a 9.500.

Cameryn is not the first in her family to be successful for the Bombers’ gymnastics team. Her older sister, Carolyn, was an All-American for the squad in 2017 on vault and in 2018 on floor. Carolyn completed her athletic eligibility last season but is currently a graduate student in the physical therapy program at the college. She said that having her younger sister on the gymnastics team has made her departure from the sport easier.

“Instead of stopping cold turkey, I still get to go into the gym and be involved a little bit and continue those connections with my old teammates,” Carolyn said.

Carolyn said she tried to avoid influencing Cameryn’s decision to choose the college but was excited when she did. Suddaby said the recruiting process with Cameryn was stressful for the coaching staff because of Carolyn’s history on the team.

“She made us all hold our breath,” Suddaby said. “I think she didn’t want to follow in her sister’s footsteps. It had to be her idea. She was very close-lipped about what she was thinking. When she decided to come, I was thrilled, but it felt right.”

Carolyn said it has been even more stressful for her to watch Cameryn compete than it was for her to do it herself.

“You want your sibling to do well, and it‘s completely out of your control,” Nichols said. “There’s nothing I can do from the bleachers. Besides that, it’s super exciting to watch her continue setting herself up for a great career at Ithaca.”

Suddaby said he has high goals for Cameryn going forward. The Bombers will host the National Collegiate Gymnastics Association Championship this year March 28 and 29, and Suddaby said he predicts Cameryn will become an All-American by placing in the top eight of the all-around competition. Cameryn said she has many goals but is currently focused on improving bars and beam, which are her two weakest events.

“I want to be more consistent,” she said. “I’ve had a little trouble on beam, and Rick was talking to me about a few tweaks I can make in my routine to score higher. Same thing on bars — just being more consistent and cleaner.”