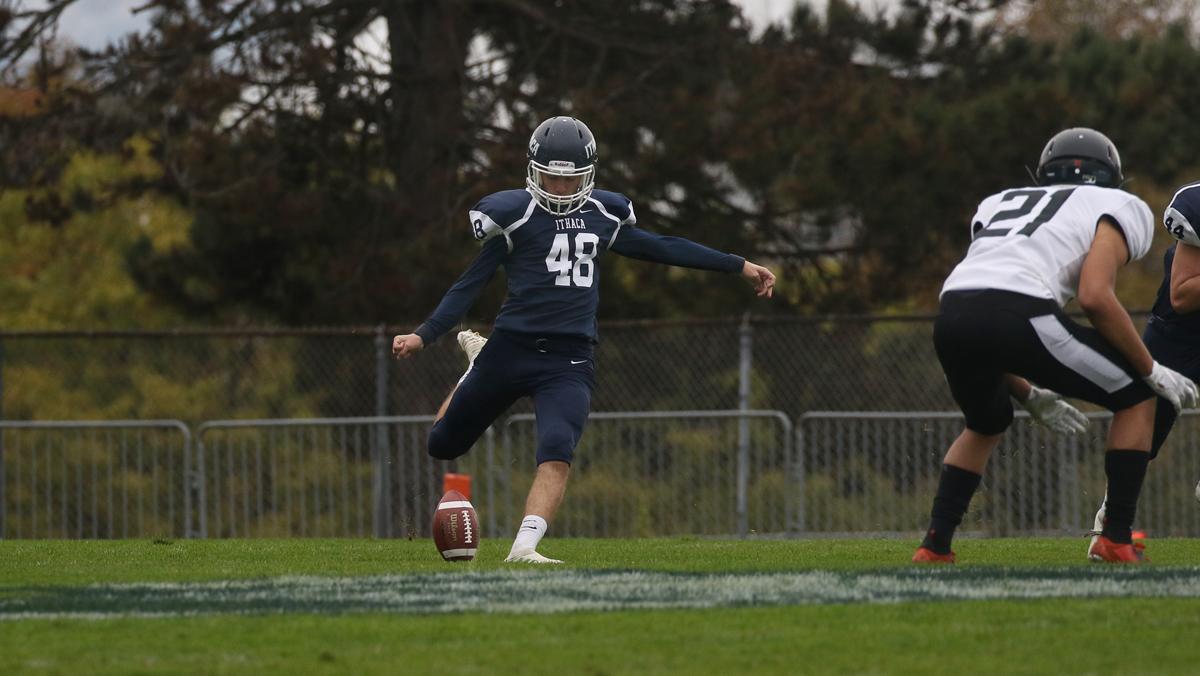 ABBEY LONDON/THE ITHACAN
Freshman kicker Nick Bahamonde winds up for a kickoff during the Bombers' game Oct. 12 in Butterfield Stadium. Bahamonde has missed zero field goals and only one extra point this season.
By Jack Murray — Staff Writer
Published: October 31, 2019

At the end of the Ithaca College football team’s practice Oct. 23 at Higgins Stadium, most of the players left the field and headed to the locker rooms. However, freshman kicker Nick Bahamonde and sophomore punter Brian Fallon went to each end of the field and booted footballs back and forth to each other, working on technique, leg power and ball spin.

Bahamonde has been a rising star on the Bombers’ special teams unit this season. He has made 10 field goals in 10 attempts this season and has also converted on 41 out of 42 extra point attempts. He also kicks the ball off for the Bombers, a role in which he has amassed 3,369 yards so far this season.

As a result of his performances, Bahamonde has been named Liberty League Rookie of the Week five times so far this season, as well as Special Teams Player of the Week once.

Bahamonde came to the college from Clarke County High School in Berryville, Virginia, where he was a three-year member of the school’s football team. He said that he began playing football after seeing his team play in the state championship game during his freshman year of high school. Clarke County lost the game 42–6.

“My high school had gone to the state championship game and missed an extra point in that game,” Bahamonde said. “I had played soccer my whole life and thought, ‘I could probably do that.’ I went out with my dad and started kicking, and now I’m here.”

Bahamonde said that his soccer experience helped him adjust to kicking a football despite the form being different. He said the two sports complement each other because they each work muscles that help create a more fluid kicking motion.

“You can’t kick it in the same way, but it translates really well,” Bahamonde said. “When I kick a field goal, I envision it like I am playing soccer, but the technique is completely different.”

Bahamonde, a television-radio major at the college, said he came to South Hill after googling good communications schools and fell in love with the campus. From there, he contacted head football coach Dan Swanstrom, and after Swanstrom saw Bahamonde at a prospect camp, he recruited him to come to the college.

Bahamonde was not the clear-cut starter going into training camp this August. He was competing against Fallon, who started last season, and freshman Enzo Martellucci, who Swanstrom said also showed promise. However, Swanstrom said Bahamonde stuck out toward the end of camp as a result of his kicking power.

“Nick definitely had the leg strength, but we wanted to see consistency, too,” Swanstrom said. “The competition was open to the three of them from day one, and each had equal opportunities to win the job. Nick kind of jumped ahead within the competition and has really taken the spot.”

All three athletes competed for two roles — kicker and punter. Fallon lost his former job as starting kicker but earned a new position as the team’s go-to punter. When Bahamonde found out he would be the starting kicker, he said, he was excited but had only one thought in his head.

“Just don’t miss,” Bahamonde said. “I knew we had two other kickers behind me that could come in at any point. I try to look at it one kick at a time, and I don’t look at the totality of the season. I look at it play by play, and that’s how I will continue.”

Fallon said that the three kickers all coach one another and that he has learned new things that have helped him improve within his own game.

“Nick is a great kid and an extremely talented kicker and punter,” Fallon said. “He has taught me more than I have ever known in my entire life about form and technique and anything having to do with getting the ball off of the ground.”

Bahamonde said that the special teams unit in front of him is just as responsible for his success as he is.

“The most important part of kicking is making sure the ball is there in the first place,” Bahamonde said. “I give all credit to [sophomore defensive back] Mikey [Roumes] for holding, [senior linebacker] Nick [Garone] for snapping, and my whole line for blocking because, without them, I’d never even get to kick in the first place.”

Bahamonde said that his experience as the starter has been phenomenal so far and that he is excited to continue his career on South Hill.

“I was very excited before I came here, but now, to have an impact on the team is amazing,” Bahamonde said. “I definitely didn’t expect this as a freshman, so seeing my name on reports has been out of this world.”

Football comes out on top against St. John Fisher College