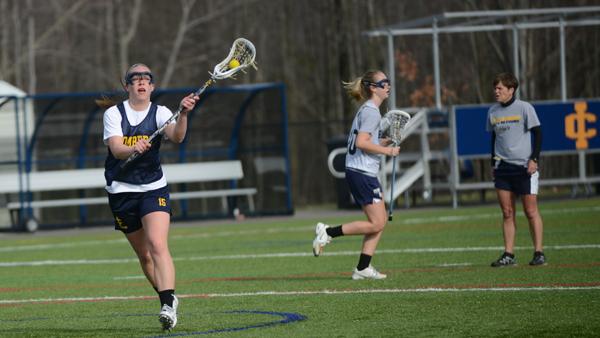 Not many people expected to see number 15 on the women’s lacrosse team darting up and down the turf of Higgins Stadium as much as she has this season. Freshman midfielder Allison Runyon has been a surprising contributor during her first season at the collegiate level.

Junior goalkeeper Brittany Romano said Runyon has found her stride and has been scoring for the Bombers in clutch situations.

“I’d say the younger kids have definitely been stepping up when we need it,” Romano said. “You have Ally Runyon, who is a freshman, coming in and still learning everything, but then she is making great goals in games at crucial moments.”

On a team that starts all but one upperclassman, Runyon has stepped up as one of nine freshmen for the Bombers and played an important scoring role. Runyon currently ranks 3rd on the team in points with 26.

The team is now 8–4 overall and 4–0 in Empire 8 play. Shannon McHale, head coach for the team, said the contributions that Runyon has been making are key to the team’s success. Opponents often look to take leading scorer senior Tracy Rivas out of the game, opening up opportunities for other players to score.

“To be able to score when they try to shut Tracy out of the game is big,” McHale said. “Every team right now is trying to shut Tracy off. We have so many more scorers now, so unless they have a lot of good defenders, it’s going to be tough for them to stop us.”

Runyon has been able to get points up on the board all season, and recently her production has improved greatly. She has averaged four goals per game in the team’s last three victories. Her latest outburst came in the form of a hat trick against Utica College, where the Bombers won 9-5.

Her breakout game came against St. John Fisher on April 7, when she scored a career-high five goals. Runyon said her level of success that game even surprised her.

“In the Fisher game, they just left me open,” Runyon said. “I don’t know what happened. I don’t feel like I did anything different that game.”

Runyon said teams might have overlooked her as a scoring threat. As a freshman player, opposing teams have limited information on her, so she can fly under the radar at times and take advantage of soft coverage.

“I don’t think they’ll forget about her now,” McHale said. “That was kind of her breakout game. I think teams are well aware of her now.”

McHale said Runyon’s effect on the team is a nice surprise because of the unpredictability of freshman play.

“You never know how rookies will respond to the college game,” McHale said. “It’s definitely faster. You just don’t know how much they are going to pick up.”

Runyon said her chemistry with her teammates has helped her develop.

“We all encourage each other,” Runyon said. “Everyone is always positive and help each other in a good way. We just make each other better. The older girls have been such a help — especially to the freshman. They have taught us so much and have always been there for us.”

Rivas said she feels “like a parent” while she watches younger players develop. She said when others can step up and fulfill the scoring role for the team when they weren’t expected to, it makes the team even stronger.

Romano said Runyon has become a crucial part of the team’s success and that the freshman is developing quicker than usual.

“She is already taking shots left handed, which is very unusual for a freshman,” Romano said. “She’s killing it.”