Freshman tennis player rallies during first year as a Bomber 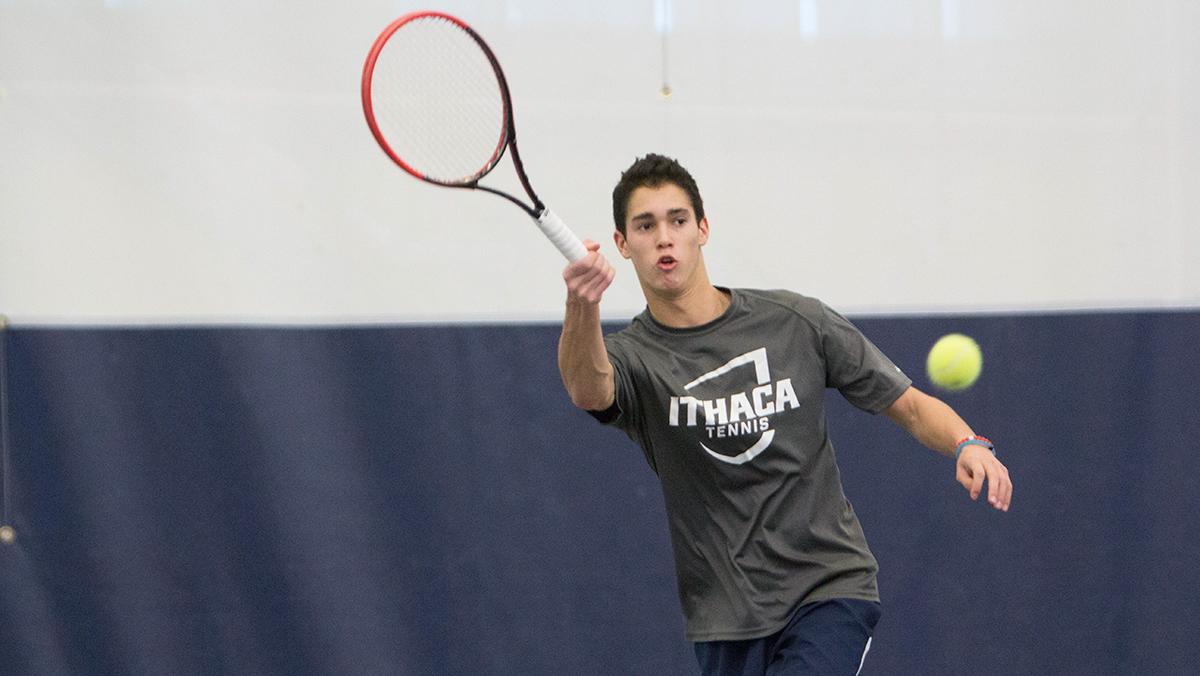 Ithaca College freshman Michael Gardiner stepped up to the line to serve the ball for the first time he’d competed since September and prepared himself for one of the toughest matches of his life. As he carefully swung his arm back, raising his racket and connecting perfectly with the ball, he tried to focus less on the hard times he’d faced just days before and more on winning this match for his team — and for his grandmother.

Right before Gardiner started his second semester at the college, his grandmother died. On Feb. 11, he took a four-hour bus ride back home to New York City before flying to Chicago, where his grandmother was originally from, for the funeral.

He attended his grandmother’s funeral Feb. 13 and flew back to Ithaca the same day, arriving back to campus at midnight. Gardiner woke up the next morning to play his first match of 2016, where he won his doubles match and proceeded to win his singles match 7–5 and 6–4.

“Playing today was definitely not easy, and I did think about not playing, but I have a responsibility to my team, and I wanted to help them beat Rochester, a rival of ours,” Gardiner said. “The match was all for her.”

Gardiner said he and his grandmother were extremely close. She played tennis until a couple  years before she died, when she became physically unable to anymore. When he visited her in Florida, she would provide him with private lessons to help him improve his playing.

Gardiner is currently the Bombers’ No. 1 singles player. He began taking tennis seriously when he was 14 years old and has since then dominated tennis courts all over New York.

Gardiner was born and raised in New York City. He attended Beacon High School, which was No. 1 one in the nation during his junior year and in the top 10 his senior year.

Gardiner said competing at a high level in high school helped shaped him into the player he is today.

“Playing in a national tournament my senior year with my high school team prepared me for the bigger challenges college tennis would present,” Gardiner said.

Gardiner finished his fall semester on the tennis team as the No. 1 singles player. He claimed an A-flight singles championship Sep.13 and won a pair of matches during the USTA/Intercollegiate Tennis Association Regional Championship on Sep. 26 at Vassar College in Poughkeepsie, New York.

Unfortunately, Gardiner suffered an off-court injury that had him out of the game for months. He tore a ligament in his left mid-foot that put him on crutches for weeks and in a boot for nearly two months.

He had to attend physical therapy almost daily, where, with the help of the athletic trainers, his strengthening and healing exercises helped him to get off crutches and regain the strength in his left foot and leg.

Gardiner said he is excited about the rest of the season but has to be careful not to push himself too far.

“I’m pumped for the season but still cautious of my foot, which isn’t 100 percent healed yet,” Gardiner said.

Despite the injury, head coach Bill Austin said Gardiner can still compete among the best of the division and help the team succeed this spring.

Junior Wes Davis said Gardiner is a great guy both on and off the court.

“He is a really good addition to the team,” Davis said. “He adds to the atmosphere of the whole team.”

Gardiner said he pushes through his injury because he knows that’s the only way he’ll be successful on the court and not let his team down.

“Today’s singles match was nerve-wracking at first, given it was a rematch of a tough match in the fall,” Gardiner said. “But as the match went on, I loosened up. My foot started bothering me towards the middle of the match, but at the end, I pushed through and dug deep during the long points.”

As for the rest of the season, Gardiner said he plans on continuing to honor his grandmother by playing to the best of his ability.

“I really just played this match for my grandma,” Gardiner said.