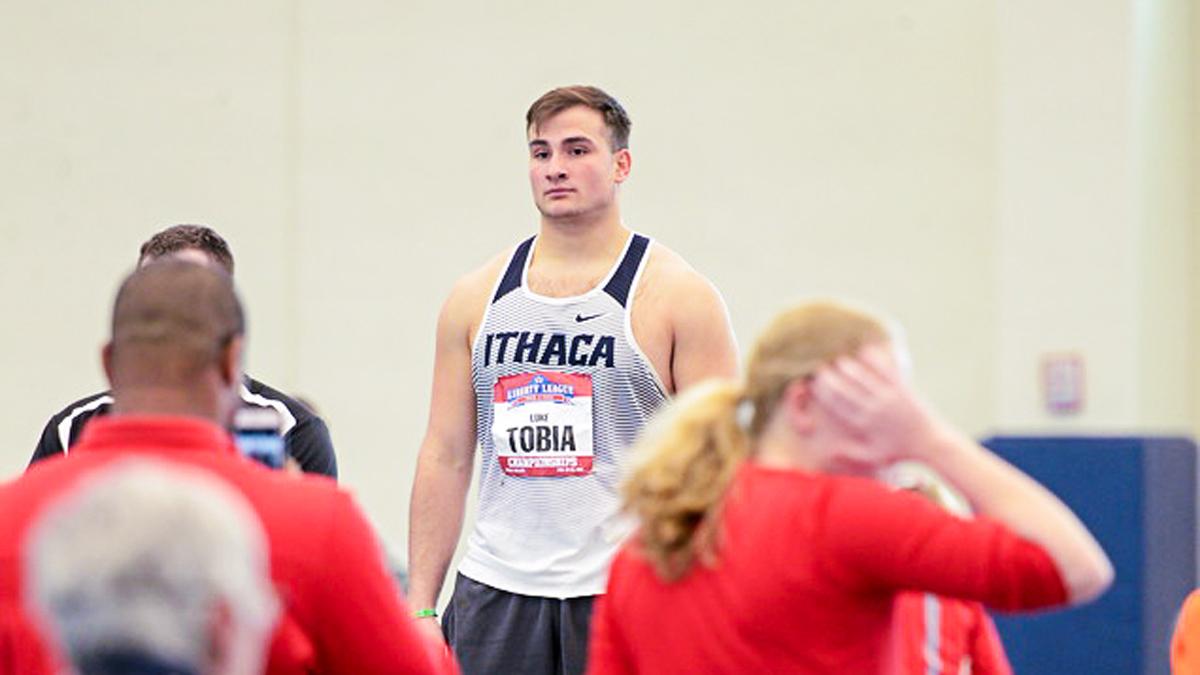 The Ithaca College men’s track and field team opened its outdoor season March 23 at the Stockton Invitational in Galloway, New Jersey. The team hopes to replicate its Liberty League Indoor Track and Field Championship on the outdoor track this season to claim its first outdoor Liberty League title.

Freshman thrower Luke Tobia will be crucial in the Bombers’ championship chase. He competed for the college’s football team during the fall season but began contributing to the track and field team during the spring semester. Tobia placed fourth in the weight throw at the Liberty League Indoor Track and Field Championships on Feb. 22 and 23. He also competed in the shot put, placing 14th.

At the Stockton Invitational, Tobia placed first in the hammer throw with a throw of 49.77 meters. The distance currently ranks him No. 21 in Division III. He was also honored as the Liberty League Men’s Field Performer of the Week.

Tobia sat down with Assistant Sports Editor Emily Adams to discuss his performance so far, his transition from football to track and field and his outlook for the remainder of the outdoor season.

Emily Adams: What has it been like transitioning from football to track?

Luke Tobia: It’s a little different. I’ve been doing it for a while because in high school I did football, track and wrestling, so I’m used to having a busy schedule. Physically, it’s not that much of a difference. Definitely it is a little difficult trying to split my time between the two groups and maintain a social status with both.

EA: How does your training for track benefit you in football?

LT: It helps with foot speed and staying low. There’s all sorts of different things from throwing that transition to football, so my [football] coaches were pretty happy that I could continue doing something that I enjoy.

EA: How are you feeling about your performance this past weekend?

LT: I feel pretty good about it. It was a really strong performance for me. Hopefully, I can improve on it by the end of the season, but I thought it was a good place to start.

EA: How has your training here been different from in high school?

LT: I definitely focus on everything now, not just hammer. In high school, I would spend two or three hours a day just throwing hammer. Here, I split up my time a little more evenly. Tyler [Burdorff] is a little bit more complete of a coach. He knows all about all the different events, and he’s definitely helped me improve.

EA: Did you prefer focusing on just the hammer, or do you like doing so many events?

LT: I personally would prefer to just focus, but it’s a team thing. I can still score points for the team in everything else. Right now, I don’t want to do those other events because I’m not as good at them, but I know that once I get through two or three years of training with Tyler in the shot put and discus, maybe I can be winning championships in those things too.

EA: Why is hammer your favorite event?

LT: Hammer, for me, is a very relaxing event. Shot put is very power-centered; it takes a lot of force. With hammer, you just spin around and you throw it. It’s not something that puts a lot of strain on my body. It’s just relaxing when I can get a good throw. When I throw well, it feels good chasing after perfection. You get that perfect throw, and everything after is just trying to replicate it.

EA: Does performing so well early in the season put any extra pressure on you?

EA: What are your goals for the rest of the season?