Freshman twin brothers hit it out of the ballpark 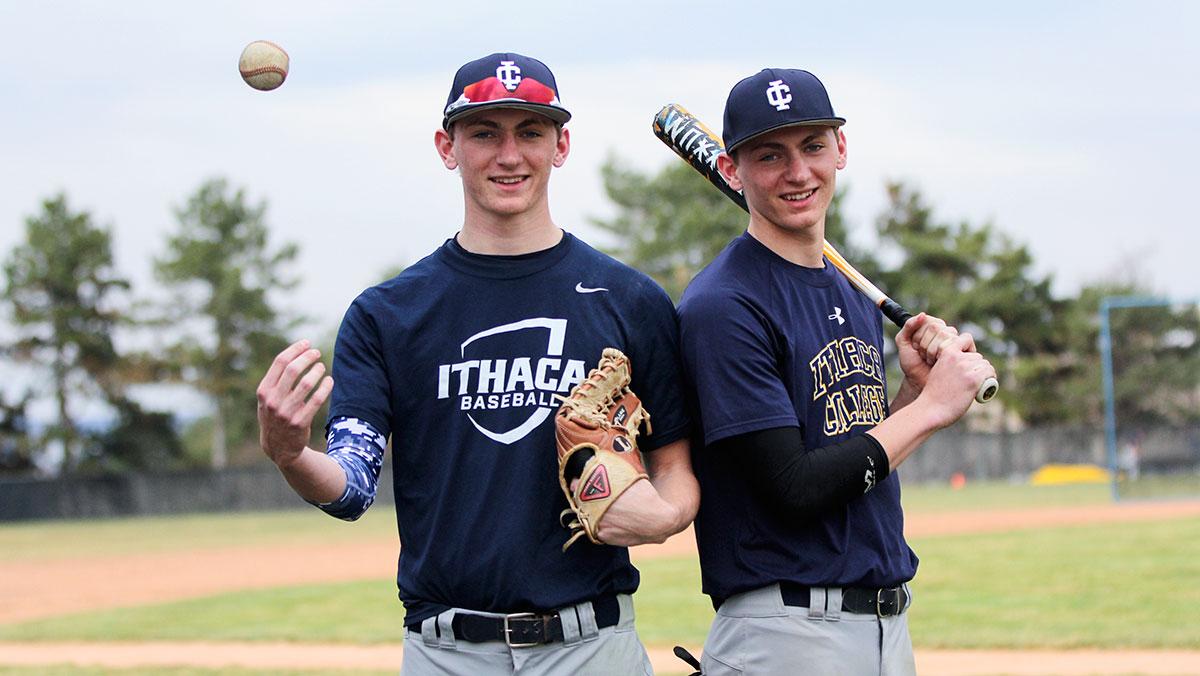 The Ithaca College baseball team takes its place on the field for its first game of the season against Susquehanna University on Feb. 27. At shortstop is Webb Little, a tall player with a sleek physique wearing number 14, and in the outfield is what looks to be the same player, except wearing number 9. In right field is Webb’s brother, Sam, his identical twin.

Both brothers said they’ve been playing baseball since very early ages, and they said they realized they could be good enough to play college baseball during middle school. After initially looking at Division I colleges, the brothers, who are from Fayetteville, New York, decided Ithaca would be the best choice for them.

The two brothers graduated from high school ranked high among New York state players. Sam was the eighth-ranked outfielder in the state, while Webb was the ninth-ranked shortstop. Valesente said that when the brothers were being recruited, they were desirable for their athleticism and potential.

“They were very athletic. They were both left-handed hitters, and Webb was a strong pitcher throwing in the mid to upper 80s as well as playing shortstop,” Valesente said. “They’re both very good athletes, and they’re both tall, and their potential was significant to what we saw.  They were very desirable on our side.”

That confidence has led to an abundance of playing time for the brothers early in their careers. In four games with the team thus far, both brothers have started every game.

Valesente said the two have earned their playing time due to their play entering the season and potential for improvement.

“They’re both doing well. They’re both adjusting well,” Valesente said. “There’s growing pains as usual. The demands of the game are different. We’re very pleased with their progress and looking forward to them being contributors to our ballclub.”

In high school, Webb was a dual-position player as a shortstop and pitcher, but an injury has kept him from pitching this year.

“The last game of the summer, I tore my labrum hitting. I just swung way too hard and pulled my shoulder out of my socket and tore my labrum,” Webb said.

In their five games with the team, Sam has fared well on the offensive and defensive sides of the game. He’s managed a .313 batting average with two runs batted in without committing an error in the outfield.

Webb started the season strong by going 1–4 with a run batted in against Susquehanna University on Feb. 27 but has yet to record a hit since. On defense, he’s committed four errors this season, including three in one game against Virginia Wesleyan College on Feb. 28 but has had three very strong games without an error.

Valesente said he’s seen good signs from each brother and is pleased with the adjustments they have made to this point.

“As far as defensively, Webb is trying to make the adjustments at short. The demands at shortstop are pretty significant compared to the speed of the game and of the player and to make double plays. He’s sort of being force-fed that,” Valesente said.

“Both are coming to the understanding of how difficult the next level of playing really is, and they are handling it great,” Oathout said.

Sam said the main difference between high school and college baseball is the competitiveness.

“Everyone plays way harder than before. In high school, no one really played for anything, it was just because you like the sport,” Sam said.

Off the field, the brothers have tried to maintain their independence throughout their first year of college. When making a decision on which college to attend, the brothers said they initially didn’t think they’d wind up at the same place.

“We didn’t really want to go to school together at first, like sophomore year, but it just kind of worked out that way,” Sam said.

The two also decided not to live together, as Sam lives in a single while Webb shares a room with another member of the baseball team. While they are working to live semiseparate lives, Webb said he and Sam share many interests and get along well.

“We’re the same people. Everything about us is the same. I mean very, very similar,” Webb said.

Oathout said the brothers’ close relationship is evident and helps on the field.

“I would say that Webb and Sam are great friends. Obviously, they’ve been doing things together their whole lives, but they talk a lot during practice and act like regular old friends,” Oathout said. “I’m hoping to see them excel and flourish.”

Oathout said the brothers’ futures look bright if they continue working at a high level.

“Both men are great ballplayers and have serious potential. If they buckle down and work hard, they will be very good,” Oathout said.