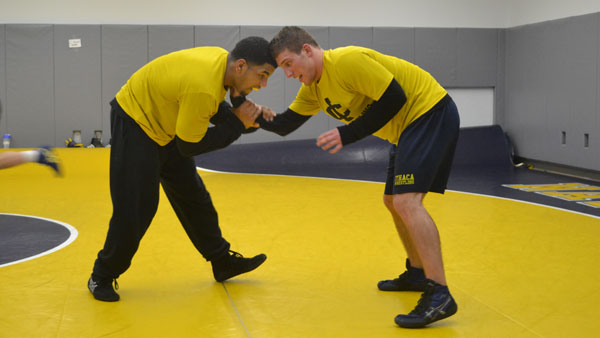 On the mat, freshman wrestler Carlos Toribio’s 184-pound build and competitive demeanor are enough to intimidate any opponent. Off the mat, his smile and excitement show just how much he loves wrestling.

As a wrestler who initially joined the sport to train for baseball, Toribio has followed teammates sophomore Josue Escobar and junior Alex Gomez from one of the top high school wrestling programs in New York state to the top of the leaderboards for the Bombers’ wrestling team.

Toribio began his college career with a record of 5–0, one of the two freshmen with an undefeated record under his belt. In his first appearance at the Ithaca Invitational on Nov. 8, Toribio recorded four wins, taking the meet title in the 174-pound weight class. In his opening-round bout, he won by pin at 1:57. After winning the next two matches, he defeated opponent Will Henson of Springfield College by a 19–4 technical fall. As a result, the Empire Collegiate Wrestling Conference named Toribio Rookie of the Week on Nov. 12.

At the New Standard Invitational at York College, he was named Most Outstanding Wrestler for the tournament, finishing with a 4–0 record for the day. His overall record is now 11–2.

Before a match, Toribio can be seen on the sidelines cheering for his teammates. Toribio said his nerves overtake him before his matches, but with the help of assistant coach and graduate student Jules Doliscar, Toribio is ready to take on anybody.

“He’s definitely nervous, but it’s obviously how you deal with the nervousness,” Doliscar said. “As you get more confident in your routine, you feel more comfortable. After he’s gotten his feet a little deeper into the water, he will just build that natural confidence that comes with working hard and doing the right thing.”

Finishing 31–1 in his senior year, Doliscar sees much of Toribio in himself. The pair has been working out together since Toribio’s high-school career. When asked to help Toribio train for a state championship, Doliscar said he saw the potential in Toribio and couldn’t say no.

While wrestling is considered an individual sport, Toribio said he believes that a team can bring individuals victory.

“They say wrestling is individual, but back at home, my high school team was a family,” Toribio said. “It’s starting to become like that here for me.”

With the help of a solid support system and coaching staff, Doliscar said he feels Toribio is on his way to college wrestling greatness.

“If he gets his act together in terms of cutting weight, and he’s focused on the classroom stuff, this kid can go all the way,” he said. “It’s a matter of him believing that and knowing that and taking the right steps. He’s going to do a lot of growing in his years here, but it’s just a matter of when he decides to do it.”

From high school to college, Toribio said Ithaca College was going to be his first and likely only choice.

“I was talking to the North Carolina State University coach and the University of Oklahoma coach, but my coach went here, and I felt like it was the best place for me,” he said.

With his high school coach Carlos Restrepo ’02 and two former teammates already on the roster, Toribio said he understood that the college was the perfect place for him to accomplish his goal.

“I want to be a national champion by the end of the season,” he said.

The South Hill squad has won three national team titles, has had 11 individual national champions and 67 All-Americans. Head coach Marty Nichols is in his 18th season and has led the team to five straight top-10 finishes in the NCAA Championships. He has coached six NCAA individual champions. Nichols said he has high hopes for the freshman but wants him to stay focused on this season.

Doliscar said he sees a similar collegiate wrestling career for Toribio if he continues to succeed the way he is right now.

“I expect to see him win multiple national titles in his career here,” Doliscar said. “I expect him to be a four-time All-American at this college. When you’re an All-American, you’re at a certain level of competition where you are up there with the best guys. It’s just a matter of piecing that together and doing the right thing. This kid can go all the way.”