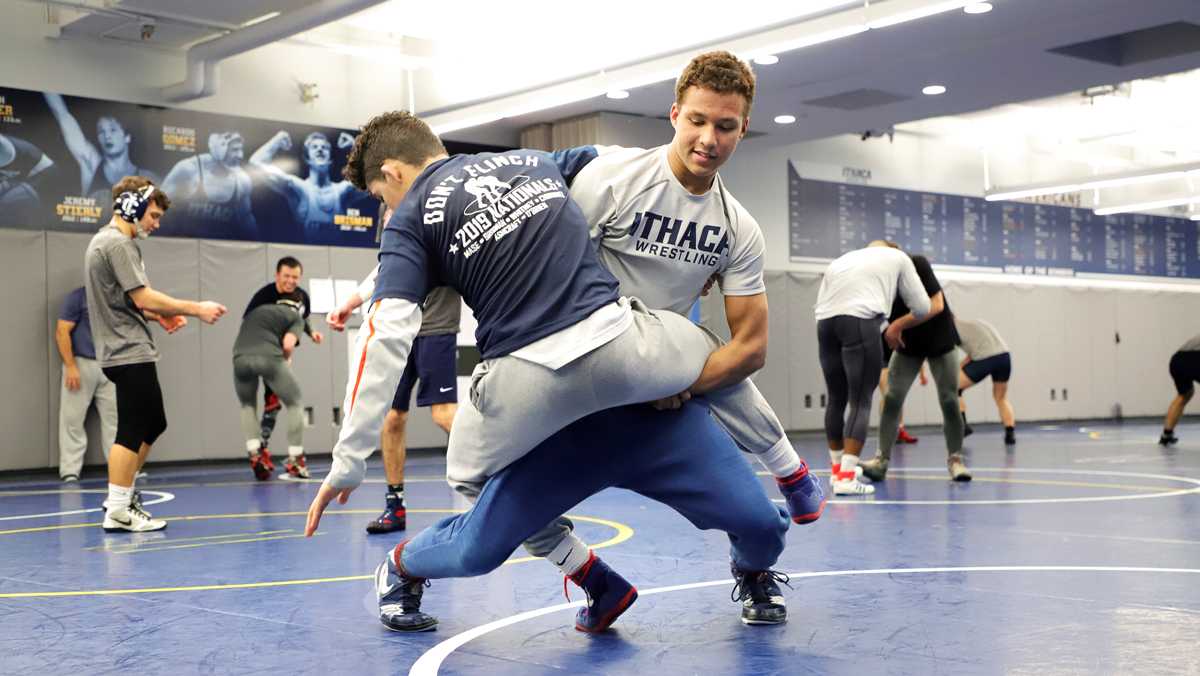 Freshman Travis Jones has found his groove with the Ithaca College wrestling team even though he has only been a Bomber for a few months. Jones received Empire Collegiate Wrestling Conference Rookie of the Week honors twice in the past four weeks.

Jones currently has a season record of 12–2. He earned his most recent conference recognition after he went 5–0 and finished in first place in the 133-pound bracket at the New York state championships Nov. 24. He was first named Rookie of the Week after taking third in the 133-pound bracket at the Bombers’ season-opener and is one of only two wrestlers on the squad to receive a conference honor so far this year.

Staff writer Connor Wood sat down with Jones to discuss his early success and his goals on the mat this season.

Connor Wood: How beneficial has it been to get your freshman year off to a hot start?

Travis Jones: It has been really great because most people’s freshman season is when they take “a lot of lumps” as my mom would say, and you get beat on a lot. Thankfully, I have not experienced a lot of that, which is great because like I said, it builds a lot of confidence and helps me keep on building and rolling the momentum that I already have now.

CW: How has your early success given you confidence as the season progresses?

TJ: It has given me a lot of confidence because being a freshman, it is scary heading into my first college matches, so now that I had found my footing and have been winning some good matches, I believe in myself more. It’s not that “I’m just a freshman. I can’t do this.” It is now “It does not matter. I just have to do my best.” I have trained hard enough, and I am confident in my own training, and being a freshman does not mean anything anymore.

CW: What do you do to prepare for competition?

TJ: I do not listen to music like most people. I just clear my head as much as possible. I usually get pretty nervous before matches, so one thing [assistant coach Tyler Daffinee] told me that really helped is instead of focusing on anxiety, just think about how I can stay in good position, how do I do things right, how should I do this thing, so that’s kind of what goes through my head before a match, and then I go out there and do my thing.

CW: How is college competition different than that of high school?

TJ: Everyone in college is good. In high school, you could have matches where you are facing someone who has never wrestled before, and you just throw them around. But it is college now. Everyone has been doing this since middle school, and for some like me, since they were six years old. So you’re not going to go out there and just completely beat someone up. Every win is earned, so the competition level is definitely a lot higher across the board.

CW: What’s been your toughest test while adjusting to being a Bomber?

TJ: My toughest test is just adjusting from my senior year of high school when I was one of the best people on my team to now where I am in a room full of wrestlers who are, at least in the beginning, so much better than me.

CW: Who do you look up to on the team?

TJ: The teammate I look up to most is Sam [Schneider]. He is a great leader and the team captain, and he has a lot of good wisdom. Also, Jordan Wallace — he is really good. One time, I was nervous before a match, and he gave me a really good talk. After that, I was so fired up and was ready to step on the mat.

CW: What are your biggest strengths in wrestling?

TJ: Everyone’s goal is to be a national champion, but I think I would be satisfied if I am an All-American and finish in the Top 8. Of course, if I can be a champ, that would be awesome.