From the Court to the Diamond: Basketball coach assists softball team 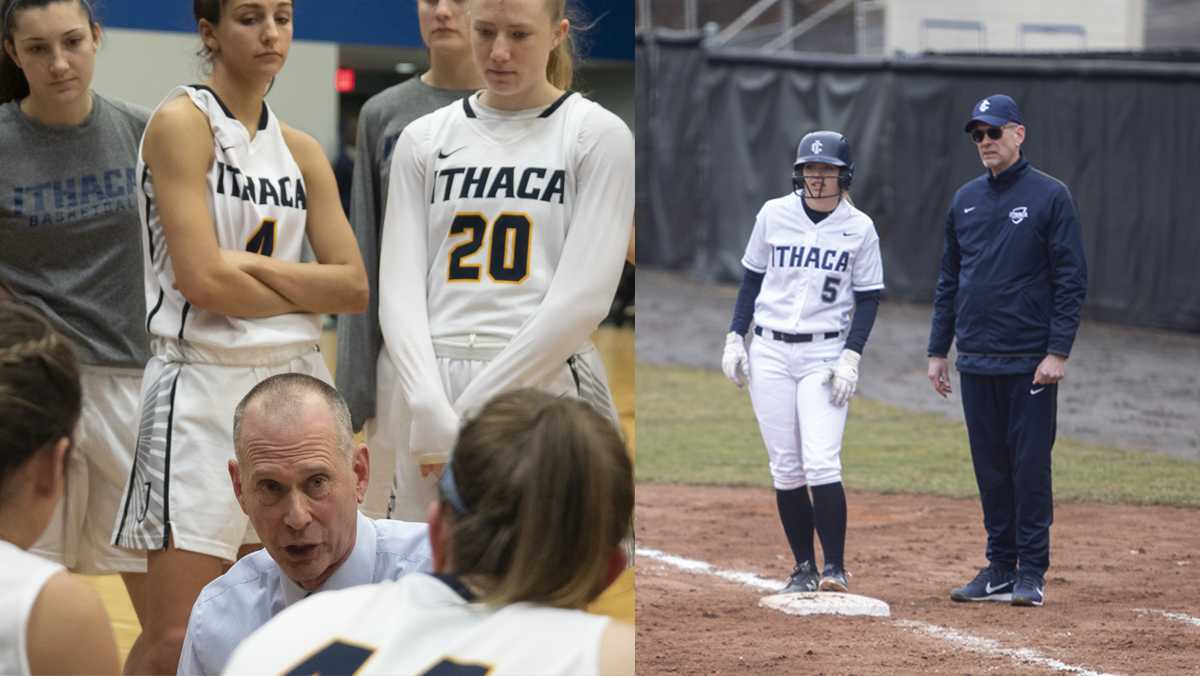 Dan Raymond, women’s basketball head coach, is used to being the man in charge.

On the basketball court, his 19 athletes call him coach and look to him to make the tough calls in every situation. However, when the basketball season concludes, Raymond becomes Dan to the players of the Ithaca College softball team as their assistant coach.

Raymond began coaching basketball at the college in 2000 and has been a member of the softball staff for over a decade, helping the team to the NCAA World Series in 2008 and 2010. He has served the entire duration of his time under head coach Deb Pallozzi.

Before beginning his career as a collegiate assistant coach, Raymond had no experience with fast–pitch softball. He was introduced to the sport as the junior varsity and assistant basketball coach at SUNY Cortland. While there, Raymond was asked to coach the softball team’s junior varsity program by Julie Lenhart, Cortland’s head softball coach.

Raymond said he had played recreational baseball and softball in the past but had to learn the game of collegiate softball while simultaneously trying to coach players. He said that pitching was especially difficult for him to grasp, so he reached out to pitchers on Cortland’s varsity squad and had them teach him about the mechanics and techniques.

“When I first started at the basketball position, we qualified so many years in a row for the NCAA tournament, and then one year we didn’t, and I didn’t know what to do,” Raymond said. “I drove my wife crazy, so she said, ‘You’ve got to find something to do.’” 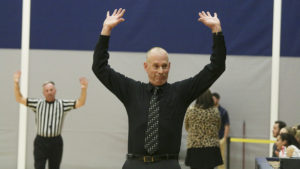 Raymond said that during his time with the softball program, he has become a sounding board and source of wisdom for Pallozzi.

“Because I grew up as a baseball fan and my dad was a big baseball player, I understand the game, and I look for nuances and stuff like that that a lot of fans don’t recognize,” he said. “The relationship that I have with Coach Pallozzi is all about the game itself and how to play it.”

Raymond said Pallozzi looks to him during in-game situations, especially defensively. He said he often offers suggestions about the positioning of outfielders, how to pitch to certain batters, and other small details that can make the difference between a win and a loss for the team.

While basketball requires tight-knit team collaboration, softball is a much more individual sport in which each player is relied on to contribute to the overall success. But Raymond said he can often apply his coaching techniques from basketball during the spring season.

“I ask myself, ‘How do I take how we compete in basketball and transform that to how we compete in softball?’” Raymond said. “There are times when I sit down with Coach Pallozzi and say, ‘What would happen if we did a drill like this that was faster and more competitive?’ I share how to compete in practice from the basketball court to the softball field.”

Sophomore outfielder Gabby Laccona said Raymond differs from other coaches she has had in the past because he is not as concerned with the technical aspects of the game but instead focuses on the mental side.

“Dan knows that he can’t teach the fundamentals of softball,” Laccona said. “He’s said it to me before. He tells me all the time that he can’t fix my swing, but he can help me fix my attitude. He knows when I’m having a rough day, and he always helps me mentally. The mental aspect of the game is what is the hardest to teach, so he does a really good job in that aspect.”

Coming from the high–pressure role of leading the women’s basketball team, Raymond said he enjoys stepping back to the position of an assistant coach.

“It’s a great adjustment, which is one of the reasons why I absolutely love doing it,” Raymond said. “It’s truly my way of coming down from my season. When my season ends and I’ve had to make literally thousands of decisions throughout the season, I can still be involved in coaching and not have to worry about really making decisions. When you’re an assistant coach, you have responsibilities and make decisions but not the final decision. It’s more suggestions.”

“Because he’s a head coach, he understands exactly what another head coach wants and needs in an assistant,” Pallozzi said. “I can talk to him, head coach to head coach and he gets it. He experiences everything that I’m speaking about so we get to share ideas back and forth.”

Raymond attributed his ability to successfully transition between his two roles to the flexibility of the softball coaching staff. He said Pallozzi is understanding that basketball has to be his priority, and she is always reasonable with her expectations for him.

“Coach Pallozzi doesn’t ask anything more of me than what I’m realistically able to give, timewise,”

Raymond said. “I never miss anything for basketball when it comes to softball, but because we can’t start 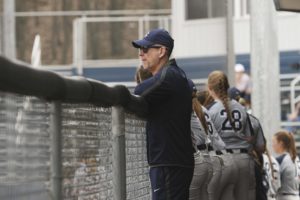 Raymond looks on during the softball team’s game against Clarkson University.

basketball until Oct. 15, I’m able to work with softball during their nontraditional season, so I’m able to build some relationships with them before the season starts.”

Though coaching across two seasons is a significant time commitment, Raymond said, the most important aspect of the job, to him, is the bond that he forms with his players. He said that although different, he equally values his personal connections with both the softball and basketball players.

“For me, the relationships are what coaching is all about,” he said. “The wins and championships are all secondary in my mind, truly. That’s not why I’m doing what I’m doing. It’s to watch a young college student mature and develop during the course of their four years here. To be able to do it with twice as many students — that’s the reward I get.”

Junior outfielder Abby Shields said that the team looks forward to seeing Raymond at practice when he finishes basketball season and that they respect his input when he does return to the diamond.

“Coach Raymond volunteers his time to be with us, and although we love when he’s there, we understand that basketball and his family comes first at the beginning of our season, and we just count the days down until we have him at our practices again,” Shields said. “You can tell he genuinely wants every person on the team to do well, and he is always willing to offer advice or just have a conversation about the game with you.”