Senior golfer gets opportunity to play golf in Scotland 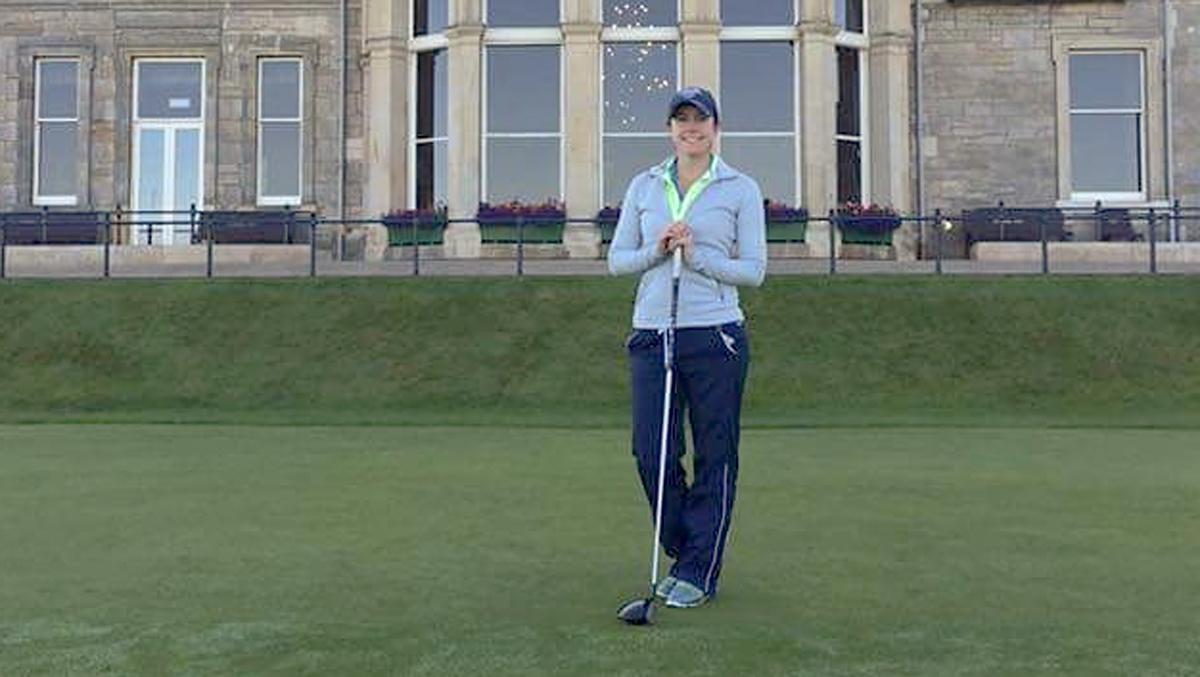 COURTESY OF THE USAAI
Senior Indiana Jones competed in Scotland from Aug. 2–10 as part of the USA Athlete International golfing program. She had the opportunity to play at the Old Course in St. Andrews which is one of the oldest golf courses in the world.
By Caitie Ihrig — Sports Editor
Published: September 6, 2017

Since senior Indiana Jones started playing golf at the age of 14 she has dreamed of playing the Old Course in St. Andrews, Scotland, which is the oldest golf course in the world. This summer, that dream came true.

“Being able to do it at such a young age, I’m beyond excited to say that I have crossed that off of my bucket list,” the 21-year-old Jones said.

Jones was one of 12 golfers to be accepted into the USA Athletes International golfing program in Scotland, from Aug. 2 to 10. There were five female and seven male golfers.

The USAAI supports 15 sports, allowing athletes to travel and compete internationally while being ambassadors for their sport, their college and the United States.

Rick Mathieu, program coordinator for the USAAI, said the main goal of the program is to give the athletes the full experience of the country they are competing in by adding an educational component.

“We don’t want them to only be on the golf course,” Mathieu said. “We want them to get the full experience of the history, the culture and the people of all the places they are going so they can experience their sport and what they have dedicated so much of their lives to in another country.

While in Scotland, the athletes had the chance to tour St. Andrews, Edinburgh and Stirling. During the tours, they were able to see different castles and learn about each place. Jones said that Edinburgh was her favorite place to tour because of the Royal Mile.

“There’s only one street, really, in Edinburgh, and it is called the Royal Mile,” she said. “And you just walk this mile, and you are taken back by the history of the buildings, the shops, the street performers, and the festivals. It’s a really cool atmosphere, and it was tons of fun to be there.”

Jones said she learned about this program from Rob Dorsett, her coach from her freshman and sophomore years at Perryville High School in Perryville, Maryland. He nominated her after hearing about the program from an email he received. Dorsett said that Jones is one of the best golfers they have had in the 15 years of the golf program.

“We’ve had a few quality golfers, but Jones, as far as her skills were concerned, I thought she would be perfect because I have been following her since she went to college,” he said. “She’s continued to perform, in my opinion, above what I originally expected as a coach.”

Dorsett said the nomination form took about 45 minutes to complete because he had to gather all of Jones’ golf statistics so the USAAI would know her skill level.

Once the form went through, former golf head coach Molly Braid received an email that Jones was nominated for this program. She then forwarded the email to Jones’ parents.

Jones’ mother, Jennifer, said that once she received Braid’s email, both she and Braid did research on the USAAI. After finding out the program had been around for more than 20 years, Jones decided to move forward with the application process and was accepted into the program.

“At first, I wasn’t really excited about it because it hadn’t set in that I was going to Scotland — there was a lot I had to do before,” Jones said. “I had to fundraise money to be able to go, and it hadn’t sunk in yet when I had agreed to start the process to go. At first, it was just this trip that was in the distant future that could happen.”

Jones fundraised $5,480 through a GoFundMe campaign, and then her parents made up the difference.

In the months leading up to the trip, Jones worked on her short game due to the number of bunkers in Scotland. She said that during the course of the trip, the team played seven golf courses, and she landed in at least 20 bunkers.

“They are everywhere, and you are bound to be in them,” Jones said. “They are completely different than the U.S. The bunkers are much bigger. They have higher lips to them to get out of, and they are much more challenging if you get in them.”

Jones was able to overcome the obstacles quickly, as the team competed in a partners’ competition against Scotland on Aug. 5 at Scotscraig Golf Course. The 12 players on the U.S. team were split into pairs, then played against a set of partners from Scotland. Jones and her partner placed second overall. After a few of the competitions, all of the groups had lunch to get to know the golfers they played against.

On Aug. 9, the U.S. team played in a team competition against Scotland at the Elmwood Golf Course, and the U.S. won.

While in Scotland, they also played at the Castle Course, Jubilee Course, St. Michaels Golf Course and the Forfar Golf Course.

On Aug. 8, the golfers played at the Old Course for fun and were each allowed to have a caddy. This was the first time Jones had ever had a caddy, and she said it was very beneficial to her game.

“He got me laughing when I was frustrated with my game,” she said. “He talked me into every shot, and he made me feel very comfortable on a very challenging course. If I was getting down on myself, he knew exactly what to say to bring me back to a good place and ready for my next shot.”

After coming back from the trip, Jennifer said she has noticed a difference in how Jones thinks about her golf game.

“She can pretty much do anything if she puts her mind to it,” Jennifer said. “She is carrying herself differently. She is a lot more confident going into her senior year.”

Part of that confidence comes from the unpredictable weather conditions in Scotland and finding success on harder golf courses.