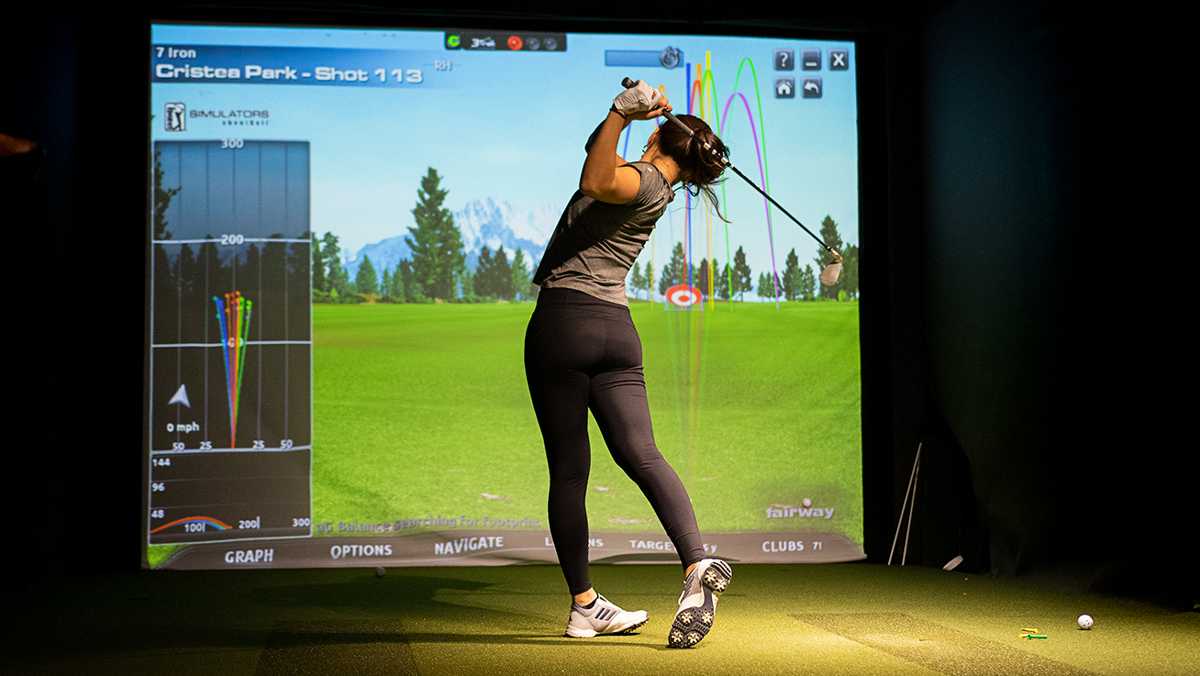 Despite the Ithaca College golf team being unable to take its usual spring break trip to Florida to compete, junior Caitlin McGrinder still escapes the South Hill winter weather a couple times a week when she trains in the team’s course simulator. Located in the back of Glazer Arena in what used to be a utility closet, McGrinder virtually golfs on courses in sunny North Carolina.

The golf simulator is a virtual reality system that allows players to train on driving ranges and golf courses around the world. The system uses a projector to show the range or course on a screen in front of players. McGrinder said there are four cameras that the system uses to detect motion from both the player and the ball. She also said there are weights in the floor that allow the motion sensors to recognize how a player’s weight shifts when they hit the ball. When a player drives a golf ball into the screen, the simulator is able to measure the speed, distance and spin direction of the drive. The cameras also help athletes review their swing to correct errors and make changes.

Sophomores Mary Gersec and Christea Park both said they prefer to use the driving range settings on the simulator rather than playing full courses because they can focus on their individual techniques.

Gersec said she has been working on the placement of her elbow when she drives the ball to create more power and on keeping her hip turned back as long as possible. Park said she has been using it to work on shortening her drive’s backswing, her impact on the ball and making her overall drive more consistent. To improve her technique, she said she will decide on a certain distance that she wants to hit the ball and drive it 20–25 times at the end of practice in the simulator.

Park said she enjoys the chance to focus on herself in the simulator.

“Personally for me, I love my team and team practice, but there are times when you just want to focus on yourself and your own thing,” Park said. “If I’m having a hard time fixing something, I can go and just do certain drills, which is something I love about the simulator.”

Head coach Keith Batson said the course simulator was installed in Spring 2016. Starting in February, the Bombers use the system while the weather is still unpredictable and while they wait for their home course, the Country Club of Ithaca, to open. Batson said this is the time for players to make changes to their technique in preparation for the new season, making the simulator a useful coaching tool.

“It’s most helpful for me as a coach to show them exactly what is going on in their swing instantly,” Batson said. “A lot of times players can’t feel what they are doing wrong until they can see it. Feel versus real is what we call this. … What you feel like you’re doing and what you are doing will likely be very different, and so if you’re not monitoring your progress, you won’t achieve the desired outcome. Seeing each swing on video and analyzing it allows you to do this.”

When the Bombers finally return outside and on the course again, the Country Club of Ithaca will be under new ownership, according to the Ithaca Times. New owners Sean and Jennifer Whittaker will rebrand the club as “RaNic” after their children, Rachel and Nicholas Whittaker. The couple purchased the club after it struggled financially due to the COVID-19 pandemic. The club is expected to open in April.

The team would usually be able to have approximately six players in the simulator at one time, but with COVID-19 social distancing guidelines, only one player and coach are allowed at a time. The Bombers have full team practices on Mondays and Fridays, when they rotate through hitting drills in the track and field throwing cages while players work individually with Batson. The stations consist of short hitting and putting drills, while the simulator is used for long drives and hits.

During the rest of the week, players are expected to sign up for an hourlong time slot to work in the simulator by themselves in addition to lifting twice a week. In previous seasons, players were able to go practice whenever they had free time but are unable to do so with COVID-19 regulations. Gersec said that while she misses the freedom of being able to use the simulator whenever she pleases, she feels like having the time slot holds her more accountable to train.

“In previous years, you could just go whenever you wanted based on your schedule that day, but now it makes you more accountable I feel like,” Gersec said. “Now it’s built into my schedule every day, so I know I’m going to the gym at this specific time and then the simulator from whatever time, and nothing can get in the way of that.”

Gersec said she felt lucky that golf was one of the safe sports to play over the summer and fall during the pandemic and that she was able to train multiple times a week.

“Throughout COVID, it was my stress relief,” Gersec said. “I would schedule my days around it and look forward to playing golf all day.”

While Park said she loves utilizing the simulator to improve her individual play — especially during icy Ithaca winters — she is excited to be back out on the course with her team.

“Every athlete has something they lack in and need to work on, and the simulator is definitely the place to do that, but being outside is such a nice environment,” Park said. “With school online, it is such a head-clearer, being forced outside and in fresh air.”