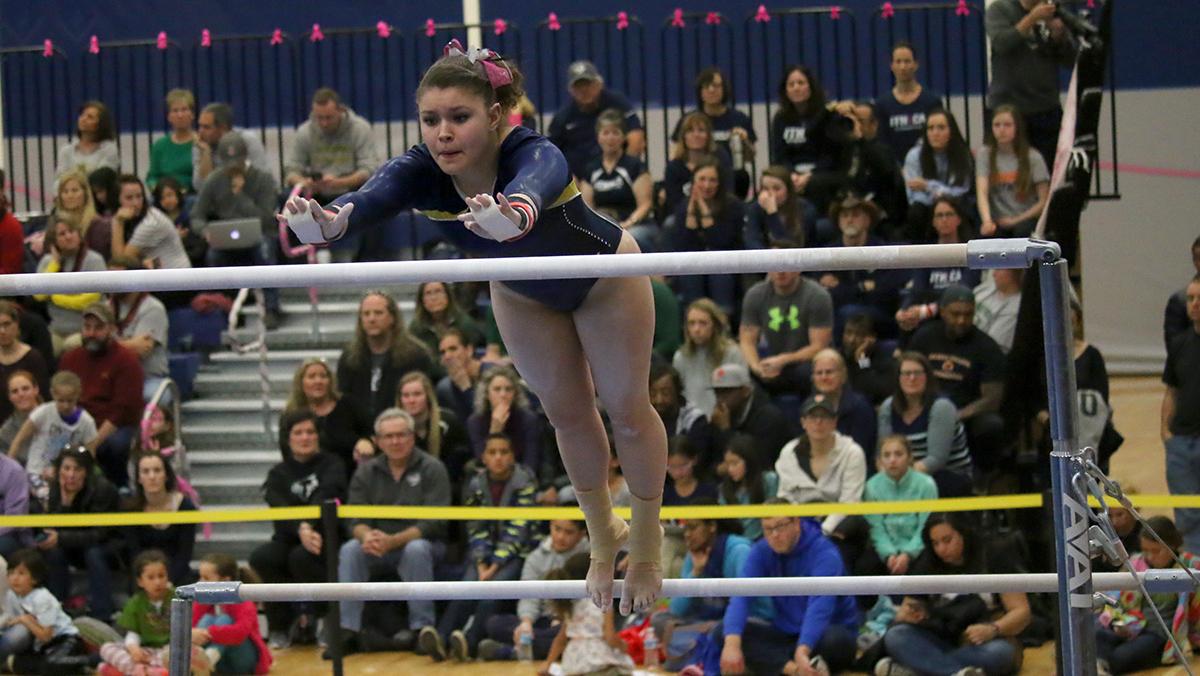 The Ithaca College women’s gymnastics team returned to the mats for their second and final home meet on Feb. 26. The lone senior, Lynley Choate, was honored by the team for her senior meet, and her parents joined her on the mat as she received her gift.

Choate said that she was very happy with how her senior meet went.

“Everything was great,” she said. “All around, we stuck most of our routines. It was a great meet, everyone was so supportive, and I love my team.”

The Bombers finished third out of four teams, behind both the number one and two NCAA Division III teams, SUNY Brockport and Ursinus College. Their final team score was 186.550.

On the bars, they were unable to keep up with Brockport and Ursinus, which is where they lost their ground during the meet. Junior Danielle Maffuid and Trammell scored 9.350s and tied for fourth in the event.

Choate had an excellent performance on the beam, scoring a 9.600 and finishing in eighth place. Freshman Paige Landes finished in ninth with a 9.575 and junior Hannah Donnelly was tenth with a 9.550.

The Bombers had the top overall score of the meet on the floor. Freshman Emily Szembrot tied for third with a score of 9.550. Sophomores Carolyn Nichols and Amy Thomas finished fifth and sixth, respectively, with scores of 9.500 and 9.475.

Thomas said that even though there were a few mistakes, the team really helped each other out.

“We worked really well as a team throughout the whole meet,” she said. “It’s great having a really big meet like this.”

Head coach Rick Suddaby said that this was one of the best performances given by the team this season.

“They performed well, we made some mistakes, but they made a lot of improvements,” Suddaby said.

The South Hill squad will compete next against SUNY Cortland at 12 p.m. March 4 in Cortland, New York.