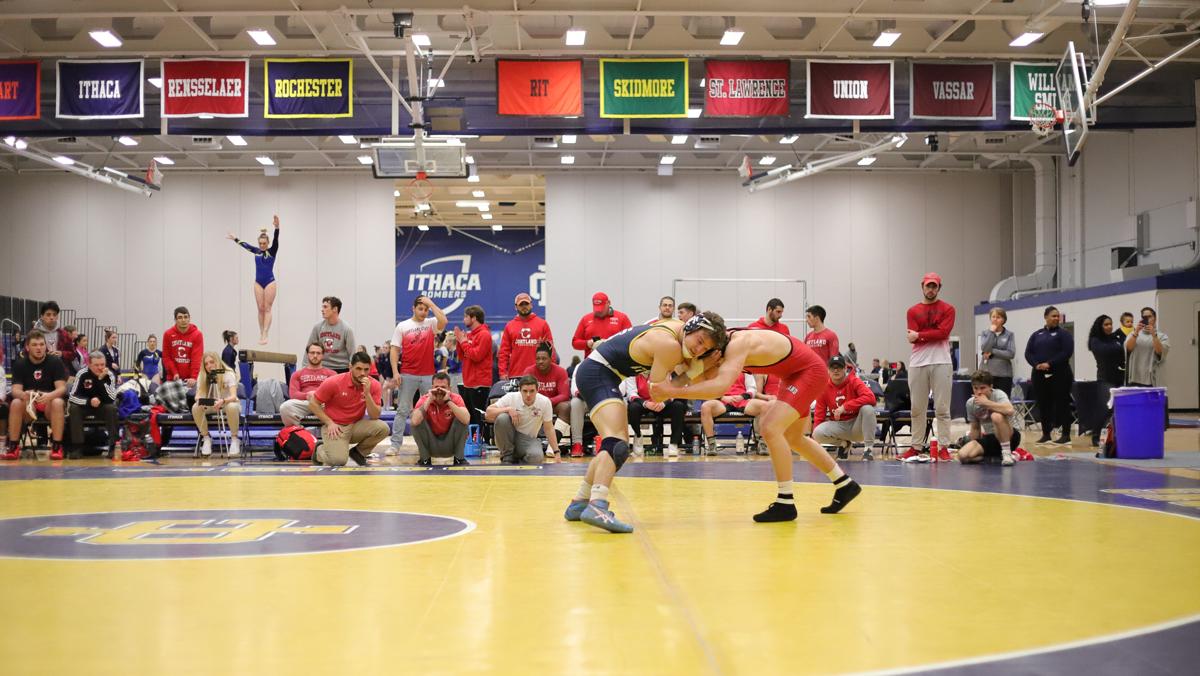 When Ithaca College senior gymnast Paige Landes stepped onto the spring floor to perform her routine Feb. 19, her music began to blare over cheers and the thud of wrestlers hitting the mat on the other side of Ben Light Gymnasium.

The gymnastics and wrestling teams competed side by side on either side of the gymnasium, and athletes could be seen running back and forth between the wrestling mat and the various gymnastics apparatuses to cheer on their respective schools throughout the meet.

The gymnastics team lost to the Red Dragons this year 185.550–188.150, and this brought the series to a 2–2 stalemate. The Bombers won the last two years in a row, but SUNY Cortland has now won in 2017 and 2020. The wrestling team dominated SUNY Cortland 31–9 to remain undefeated in the Rumble and Tumble Meet matchup.

Gymnastics head coach Rick Suddaby said that Gary Babjack, then–SUNY Cortland gymnastics coach, came up with the idea for the meet in 2017. The meet has been alternately hosted by the two schools since its inception.

“The idea has been done at other schools,” Suddaby said. “Usually, Division I schools will do it, but Cortland held our first one. It’s good to have [the meet] with Cortland as such rival schools.”

The Bombers competed in the Cornell Big Red Invitational, which was also Rumble and Tumble Meet format, Feb. 16 against The College at Brockport, SUNY Cortland and Cornell University.

Freshman Zoe Kyriakopoulos said the invitational at Cornell University served as a warmup for the home meet for the team and helped the athletes learn how to stay calm in the high–energy atmosphere of Ben Light Gymnasium.

SUNY Cortland gymnastics coach Sulekha Modi Zaug, who is also an alum of the Red Dragons’ gymnastics program, is in her first season leading the team, so this was her first experience with the Rumble and Tumble Meet. She said the meet is extremely competitive because of the history between Ithaca College and SUNY Cortland.

“The longtime tradition of Cortland versus Ithaca is always intense,” Zaug said. “I’ve known these coaches for 20 years, and it’s such a fun rivalry. It feels like coming back home.”

The Rumble and Tumble Meet was also a Bomber Bash event for the Ithaca College Student-Athlete Advisory Council and a pink event for the Ithaca College Unites For HER club, along with it being the wrestling team’s senior night. The partnership among the teams and on-campus organizations drew a large crowd that filled the majority of the bleachers in the gymnasium. Senior wrestler Ben Brisman said the meet is often one of the best attended of the year.

“I really enjoy that a lot of people come and watch it,” Brisman said. “It’s cool to have a big crowd and a lot of excitement. It’s a great environment, and a lot of other student-athletes come to support.”

Ithaca College Unite For HER hosts various events throughout the year with sports teams to raise money and awareness for breast cancer patients. Many of the athletes sported pink T-shirts and accessories to represent the group. The Bomber Bash also featured free food from Chick-N-Bap for student-athletes who attended.

Wrestling head coach Marty Nichols said that having so much going on during the meet provides the wrestling team with good experience for the distractions that are often present at larger championship competitions.

“[The gymnasts] are flying all around and the music is on, so it’s a really good training situation,” Nichols said. “Getting ready for regionals and stuff, people are going to try to distract you, so if you can focus on what you’re doing with all of that stuff going on, it’s really good practice.”

The wrestling team put up several strong performances against the Red Dragons. No. 10–ranked sophomore Eze Chukwuezi defeated SUNY Cortland senior Kevin Morgans in a 14–2 major decision in the 184-pound weight class. Brisman came out on top in a close 3–2 decision over Cortland SUNY freshman Cahal Donovan in the 149-pound weight class. Graduate student Dalton Elias ended the meet with an exciting heavyweight match against SUNY Cortland freshman Trentyn Rupert. Elias pinned Rupert in the third period after being down 3–2 in the second period.

While the meet is an exercise in focus for his team, Nichols also said he enjoys getting to watch other Bombers compete as well.

“We don’t have many home meets, so it’s good to see the gymnastics team,” he said. “In between the breaks, I’ll watch a couple events. Everyone gets the chance to be around each other a little bit more, and it’s really supportive. The guys love it.”

“It’s fun to get out there and compete in the main gym for this year because we’re hosting our national tournament,” Suddaby said. “It helps us get out there and see what it’s going to be like. It’s really exciting stuff to get there.”

The Bombers’ gymnastics team posted a higher score than the Red Dragons on vault and trailed them by less than half of a point on the uneven parallel bars and the floor exercise. Landes posted her season-best floor score of 9.525 to take second place in the event. Senior Cassidy Marquette led the squad on vault with a 9.650 to finish in first. Freshman Cameryn Nichols was just behind Marquette in second place with 9.625.

Kyriakopoulos said that her favorite part of the night was the Bombers’ big finish in the floor exercise after struggling in the beam and the uneven parallel bars.

“We started super strong on vault,” Kyriakopoulos said. “We had a couple mishaps, but then we finished super strong on floor, which we’ve been working pretty hard on to clean up, and to bring that floor squad together was really good.”

Suddaby graduated from SUNY Cortland in 1979, but he said he loves the rivalry between his alma mater and his current team.

Let’s Get Ready to Rumble and Tumble!