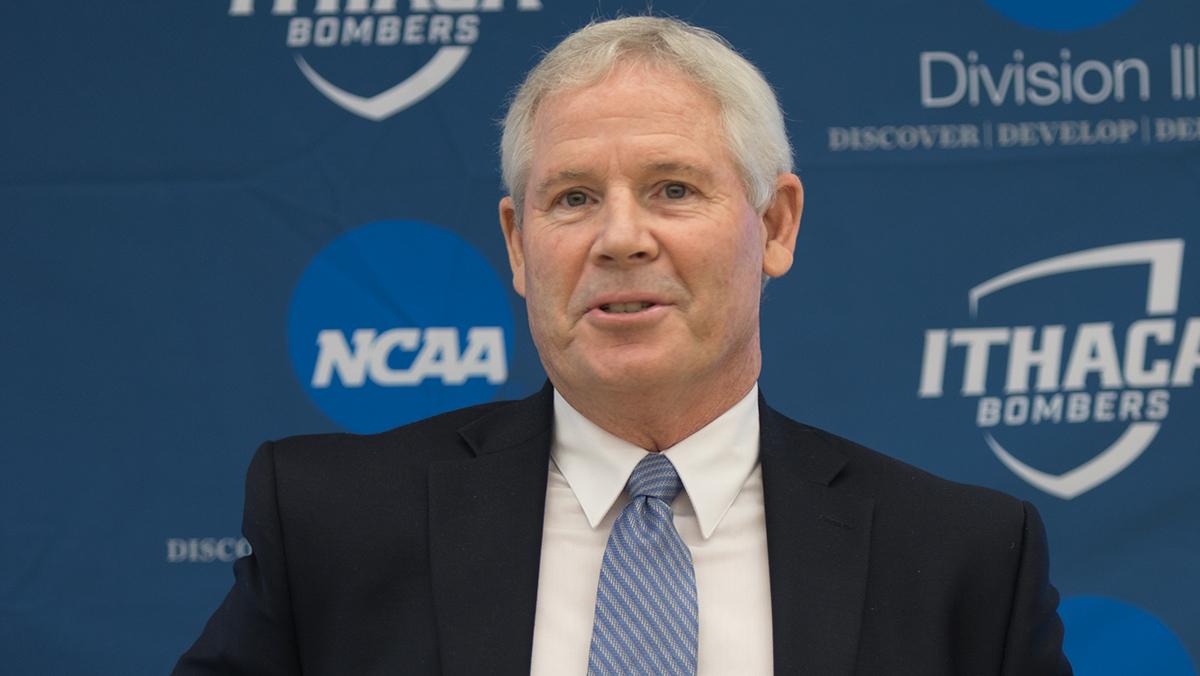 Ithaca College head football coach Mike Welch was named an honorary member of the American Football Coaches Association on Jan. 12 at the AFCA Awards Luncheon during its convention in San Antonio, Texas. Welch was a member of the AFCA Board of Trustees for nine years, including one term as president of the organization.

Sports Editor Andrew Sullivan spoke with Welch about his thoughts on both honors, his contributions to the game of football and his past experiences working for the AFCA.

Andrew Sullivan: What were your initial reactions when you heard that you would be receiving the Outstanding Contribution to Amateur Football award?

Mike Welch: Well, my initial reaction was that I was very humbled to be recognized by the National Football Foundation Central chapter. It’s a very prestigious part of the game of football. They just don’t give awards to everybody. This one is unique in the description of it as far as an outstanding contributor to amateur football. I’m very proud of that, to be honest with you. I love the game, and I try to do everything that I can with my position here at Ithaca and then beyond to promote the game of football and make it better for the players that play it and for the coaches that coach it. That’s just what I’ve always believed and something that I really love doing.

AS: What do you believe has been your greatest contribution to the game of football?

MW: Well, when you get into the leadership position, like being the head football coach of a school like Ithaca, it comes with a lot of responsibility because of the people that I represent: the past coaches and players, the young men that I coach now. I believe there’s a certain way of how the game should be coached and played with integrity, hard work, class, determination and sportsmanship. All the good things in life, all the good things that we stand for. That’s how the game should be played. I’ve made every effort to do that in my coaching career with the teams that I’ve had the opportunity to coach and the staffs that I’ve had the opportunity to coach. … I have a philosophy that the game of football is a lot like life. We can offer that vehicle for people to develop as quality people, hard workers, contributors and high achievers. So that’s been my philosophy, and I like to believe that I live that way and coach that way.

AS: Can you think of a specific time when you have witnessed your philosophies impact the life of one of your players or coaches?

MW: I get a lot of letters back from guys that have played for us that have gone on and had wonderful careers. For instance, I got a letter from Kevin Heinzelman, who played for me, and he said that there are decisions that he makes in life that he says to himself before he makes that decision, “What would Coach Welch do?” … [Football] can also be a vehicle for making changes in people’s lives. … We will have a give-back day, where we invite all of the youth football kids to come up and have a clinic with our players. A mother came up to me, and she was in tears, and she said, “I have to thank you, Coach. My son hasn’t smiled in three months, and today your players just took an interest in him.” I said, “Why, what’s wrong?” She said, “His dad is fighting over in Afghanistan. He just hasn’t had a good day since. Your players provided that for him.” So you never know when the game is going to make an impact on somebody’s life.

AS: You served as the president of the AFCA in 2014. What was that experience like?

MW: I had the opportunity to be elected to serve on the board of trustees for the American Football Coaches Association 10 years ago. Every year you move up the ranks: from third vice president, to second, to first and then eventually president. I served that term, and it was just a great opportunity being involved in the decision-making of college football and football in general. … I’ve been around some great, great coaches. Everyone from Mack Brown of [the University of] Texas to Tommy Tuberville of [the of University of] Cincinnati. … It was a great experience.

AS: You worked alongside coaches at the amateur and professional levels. How did working alongside such a diverse group of football coaches elevate your career in athletics?

MW: I’ve always tried to keep learning. I’m selective on who I listen to, but that’s a pretty good group. They’ve been able to confirm some of my beliefs because their beliefs are the same. There isn’t a lot of X’s and O’s [involved], although I try to maybe bend their ear at a time when we’re at a relaxed moment when I can talk to them about this and that, and they are always very generous. You will be surprised that football coaches are generous with ideas, even though we compete against each other. … There’s always something that you could pick up that could make your team better. For instance, there was somebody on board from the University of California, Davis, who did bowling tournaments with his players. The players got to know each other in a more relaxed and enjoyable activity, and so I put one on 10 years ago. Players love it.  They have a lot of fun.

AS: You are now an honorary member of the AFCA. Do you see this as a validation for your career?

MW: I guess I don’t necessarily need that. It’s an honor, a tremendous honor. There aren’t many men that have received that. I’m very humbled to have something like that. I’m in a very small group, and I like to think that I’ve earned it and feel good about it and just enjoy the moment, a time when I’m around our group of coaches at the American Football Coaches Association. It makes me feel good.