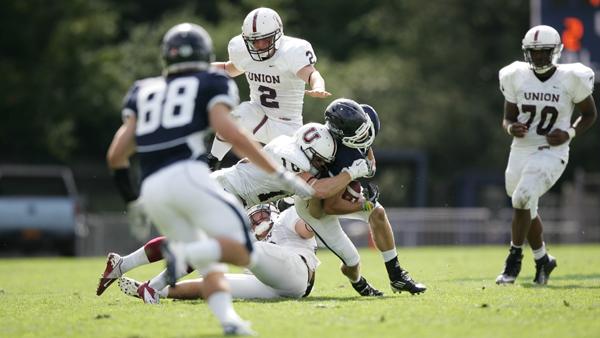 Concussions have been a focal point of conversation surrounding health and safety issues in football for several years. Head injuries even gained presidential attention last week, when President Barack Obama weighed in on the state of athlete safety.

“I’m a big football fan, but I have to tell you, if I had a son, I’d have to think long and hard before I let him play football,” Obama said in a Jan. 27 interview.

Last spring, the suicide of ex-National Football League linebacker Junior Seau was linked to degenerative brain diseases brought on by concussions. In January, Baltimore Ravens’ safety Bernard Pollard said the way the NFL is headed, he predicts someone will die on the field and the league will cease to exist.

Obama said he is more worried about player safety at the collegiate level than any other.

“Most [NFL players] are well-compensated for the violence they do to their bodies,” Obama said in the interview. “You read some of these stories about college players who undergo some of these same problems with concussions and so forth and then have nothing to fall back on.”

This year, concussions have spiked at Ithaca College. To create a safe environment for athletes on campus, coaches, athletic  trainers and staff continue to work to treat and educate athletes about concussions. However, sometimes despite routine checkups and medical screenings from coaches and trainers, pressure that players put on themselves can place them in danger.

Chris Hummel, associate professor of athletic training and football team athletic trainer, said concussions are usually the result of a  hit to the head, causing a whiplash effect. The brain is jarred after a hit, bouncing it against the inside of the skull. The contact causes chemicals in the brain to unbalance. As a result, dizziness, blurred vision and nausea can set in, and in some cases, a loss of consciousness.

According to Hummel, the entire football program, made up of about 150 players, reported 19 concussions last season. This is up from a nine per season average in the past seven years. Hummel pointed to the increase in concussion awareness in both high school and college athletics as a reason behind the increase in reported concussions. Athletes are reporting more concussions because they are better educated in the danger of the injury.

Concussions are dangerous because they are unpredictable, both for athletic trainers and players. Because the events of a concussion are so sudden, players like Stremmel say they often do not even know it happened.

On the training side, Hummel said there is no way to truly tell if a hit has caused a concussion, no matter how hard the hit. Receiving a high-impact hit to the head does not necessarily mean a concussion has occurred. Hummel said concussions may be sustained after an extremely mild hit and could even happen from merely sitting down too hard.

Jorge Barrio, UCLA professor of neuroscience, said advancements in head injury detection and safety are constantly being made, and that early detection is the key to long-term safety.

To recognize concussive damage early, all athletes at the college are required to take what is called an “ImPACT” test. Before the season, an athlete takes an online test measuring reaction time, verbal memory and visual memory. These tests provide a baseline score for an athlete, so if he sustains a hit to the head, he retakes the test and the program compares the score to his previous scores to determine if the athlete has been negatively affected by the hit.

Once the damage has been assessed, there are steps that must be taken before an athlete is allowed to return to full play, including a seven to 10 day period of slowly acclimating the body to full contact football. Junior quarterback Phil Neumann said during the recovery period from his concussion, routine checkups and medical screenings were done to ensure he was healthy enough return to the field.

“They did a really good job of monitoring my progress when I had a concussion,” Neumann said. “They weren’t going to let me go out there, even to practice, unless I was 100 percent. I couldn’t be out there at 85 or 90 percent. It was 100 or I wasn’t playing.”

Kyle Woody, associate professor of sport management and media, has worked with players all the way up to the NFL level and said he thinks the team puts the players’ safety above any other interest. But if coaches and athletic trainers don’t know about a head injury, they cannot effectively protect the athlete. Some athletes put pressure on themselves to stay on the field and don’t report their own concussion.

Stremmel said he has stayed in games after big hits because of internal pressure.

“I’ve always been so concentrated on the game or season that I had to keep going,” Stremmel said. “I don’t know if you can call it an ego thing or if it’s about pride, but I just never made it a priority for me to go get checked.”

Woody said a culture of pride and focus on glory and achievement in sports as a point of validation can cause players to play through injuries to avoid the risk of being labeled “injury prone.”

Despite some player pressures that keep athletes on the field while they are injured, the coaches make player health a priority.