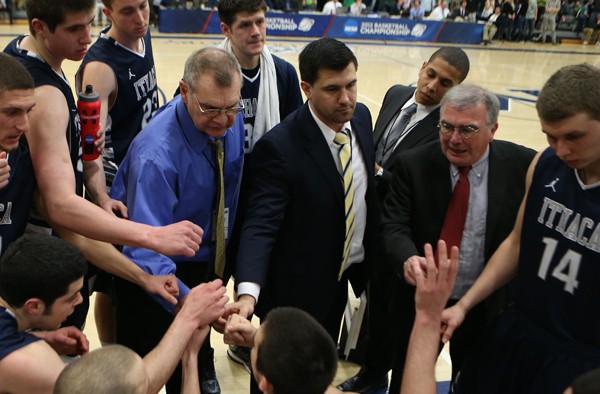 Durst Breneiser/The Ithacan
The team gathers around Head Coach Jim Mullins during a huddle in the second half.
By Christian Araos — Staff Writer
Published: March 20, 2013

Statistically, the final 10 seconds of the men’s basketball season could be described as a stretch involving a tie, two lead changes and an eventual 73-72 loss. But stats alone cannot tell the story of one of the most dramatic and important games in Bomber history.

Last Saturday’s game pitted the Middlebury College Panthers, who were the 7th-ranked team in the country and making their fourth consecutive appearance in the Sweet 16, against the South Hill Squad that entered the postseason unranked, relatively unknown and in unfamiliar territory, making their first-ever Sweet 16 appearance.

The Bombers got there with strong defense, shutting down University of Rochester guard and National Player of the Year contender John DiBartolomeo to win in the Round of 32 on a last-second tip-in by senior guard Eli Maravich.

Last season, the Middlebury Panthers entered the NCAA Tournament as the 4th-ranked team in the nation, only to be eliminated by the University of Scranton at home on a buzzer-beater in the Sweet 16. The thought of another heartbreaking home loss lingered in the back of Panthers junior guard Joey Kizel’s mind throughout this year’s tournament.

“I didn’t want to lose like that again,” Kizel said. “Last year was an absolutely devastating moment, and I don’t know how we would be able to handle two games like that.”

Fifty-three weeks after that loss, the Middlebury’s Pepin Gym once again hosted a sectional game against the Bombers. Fans seated on both sides produced an atmosphere equally as raucous as Division-I arenas that hold 10 times as many people as the 1,800 that began filling Pepin.

For most of the first half, the Blue and Gold traded buckets with the Panthers and went into halftime down 36-34. All in all, for a team whose head coach doubted they would make the tournament if they failed to win the Empire 8 tournament, keeping the game close was an accomplishment.

The Bombers came out of the second half gate firing, scoring the first five points of the period. Things looked bright for the team, but the Panthers responded with an incredible feat of outside accuracy, draining seven straight 3-pointers and taking a 10-point lead. A second chance bucket by senior forward Andrei Oztemel cut the deficit to eight before the media timeout with 10:42 remaining.

The Blue and Gold could have been discouraged by the hot-shooting Panthers, but for the third straight week, the Bombers came out of the under-12 media timeout motivated. Senior guard Eli Maravich capitalized on kickout passes from junior forwards Frank Mitchell and Tom Sweeney to cut the Panther lead to two with 7:41 remaining and quieting a Middlebury crowd on the verge of erupting.

Middlebury senior guard Jake Wolfin’s sixth 3-pointer revitalized the crowd on the Panther’s next possession, and the Bombers, for the first time in the postseason, lost their cool. Senior forward Travis Warech, guarded by the defensively talented senior guard Nolan Thompson, took a heavily contested 3. On the next possession, Mitchell lost his handle on the low post and missed a wild layup. After the Panthers converted two free throws, they were up three possessions again.

Once again, the Bombers rallied by cutting the Panther lead to 62-61 in under two minutes with 4:43 to go.

The teams traded baskets for the next two minutes until Warech was able to swipe the ball from Thompson and pass it to Rossi, who led the slow break down the left wing. With the Panther defense shading towards him, Rossi found Maravich with a skip pass to the right wing. The wide open shot was drained, and for the first time in almost 14 minutes, the Bombers had taken the lead. Ithaca was less than two minutes away from its first-ever trip to the Elite 8.

On the next possession, senior forward Peter Lynch backed down Sweeney in the post and forced the center into fouling. Two successful free throws later, the Panthers recaptured the lead.

The Bombers were down one with 56 seconds remaining and had three fouls to give. With that leeway, they were able to press the Panthers inbound, foul and force another inbound.

A series of strategic fouls by the Bombers defense and free throw attempts put the Panthers up by three with 27 seconds left. The Bombers, out of timeouts, chose to go for the quick basket. After receiving a pass from Rossi, Maravich drove to the basket and laid it in off the glass to regain the lead with 19 seconds left.

Healey grabbed Thompson for the team’s ninth foul. For the second straight time, Thompson missed his first free throw, and Maravich calmly grabbed the rebound. The Bombers would have 15 seconds to get a basket and advance to the national quarterfinals.

While the Bomber guards quickly ran up the court, Mitchell posted Lynch up on the right elbow. The pass quickly came in, and Mitchell used his feet and torso to roll the ball off him and dribble toward the basket unguarded. As Lynch tried to chase Mitchell from behind, Mitchell laid the ball in off the glass. The Bombers had retaken the 72-71 lead with nine seconds left.

The Panther crowd was stunned as the team inbounded to Kizel. Immediately pressed by the Bombers, he dribbled towards the top of the arc in a frenzied manner with his right hand toward Oztemel. The two collided with a thud. A whistle blew and the crowd went silent.

Oztemel was flagged for the team’s 10th foul and, with 1.9 seconds remaining, a questionable call put Kizel at the line for two and gave him a chance to take the lead.

The first free throw went up and in, and the crowd was delighted and relieved at Kizel, who all but guaranteed overtime at worst. With four Bombers standing guard, Kizel coolly converted the second free throw, and the collective heart of the Bomber Nation sunk. Middlebury had scored its last six points at the free throw line and taken the lead.

The ball was inbounded to Warech, who took a dribble as two Panthers converged on him. With no options left, he heaved a three-quarter-court shot. The ball sailed through the air carrying the team’s last hope at extending its improbable run. The shot clanked off of the front of the backboard and bounced away as the buzzer sounded.

Warech, who had been instrumental in the entire tournament run, averaging more than 20 points per game, stumbled toward the Bomber bench and lay face down on the hardwood. His teammates stood from the bench in stunned silence as the Panther players celebrated at midcourt. The stewards worked to hold back the home fans, who were footsteps away from mobbing the court. After the postgame handshakes, the Bombers solemnly walked back into the locker room.

It was the end of the collegiate career for Warech, Maravich, Healey, Rossi and Oztemel. Head Coach Jim Mullins called them the greatest senior class in the program’s history.

Their improbable and historic run was ended by the winningest senior class in Middlebury history. After the game, Mullins asked his upset team if they were proud of their second-half effort, and the team lifted their heads high.

“They did [say they were proud], and so was I,” Mullins said.

After a team huddle, Maravich quickly walked away from the crowd and sat on the top row of the bleachers with his family. It would be the last college game of his life as well as his classmates’. He said the team’s focus and determination had put the program on the map.

“We never faltered,” Maravich said. “We were down 10 with 12 minutes to go in every game basically. We just kept playing, and at no point did it ever feel like we were going to lose.”

In the end, the Bombers season can be summed up statistically with a 21–8 record and a Sweet 16 appearance, but no amount of statistics could ever capture the emotion of the last game of the senior class’ career.