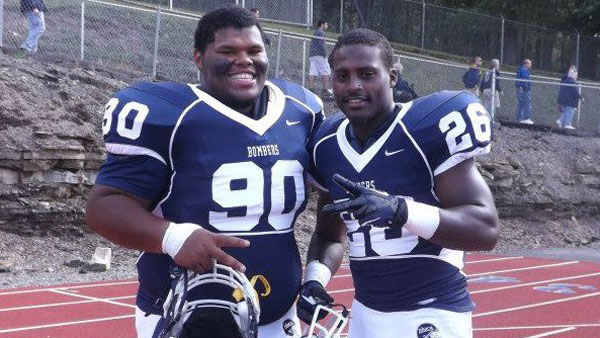 Senior running back Rakim Jones and sophomore defensive lineman Tijah Henderson did not think they would play in their first Cortaca Jug game this coming Saturday. As they finished their respective careers at Ithaca High School, each wanted to be as far away from Butterfield Stadium as possible. However, for Jones and Henderson, Saturday’s game is a culmination of a career arc that began and ended at home.

Jones and Henderson, cousins, were born and raised in Ithaca. When they didn’t have a youth football game or practice, they went to Ithaca College and Cornell University games as part of the town’s youth programs. As the cousins grew up, the word “Cortaca” became a part of their vocabulary, as they would hear student teachers from South Hill discuss the game. Though it was taking place minutes away from home, neither of them went to a Cortaca game growing up as children.

“Growing up, I never had a chance to go because of animosity between the two rival schools,” Henderson said. “Everyone is a college student, and we know what goes on during Cortaca, so my mom didn’t really want me as a kid to go to those games and be around that atmosphere.”

Neither Henderson nor Jones wanted to go to the college. Henderson said he wanted to leave Ithaca, and Jones had bigger dreams. By the time Jones began his senior year at Ithaca High School in the fall of 2007, Syracuse University and Penn State University were already showing interest in him. That was until he tore his ACL three weeks into the season.

With a Division I scholarship out of the question, Jones attended Hudson Valley Community College and Tompkins Cortland Community College for a year each. He said he needed to improve his grades if he ever wanted to play collegiate football. After two years of community college, Jones was running out of playing options. He decided to talk to an old mentor, Mike Welch, head coach of the Bombers football team.

“I was desperate,” Jones said. “I know I’m a football player. Coach Welch sat me down and said, ‘I would love to have you here, but you have to get the grades and get into the school.”’

Welch is a prominent figure in Ithaca’s youth-football culture. He hosts a yearly sports day for children in affiliation with the Greater Ithaca Activities Center. Welch said he uses the program as a way for current players to branch out to the community.

“I think we all should give back to our community,” Welch said. “This is something that athletes can do because they’re looked upon as role models. What better role models, I think, than guys in our program?”

As young teenagers, Henderson and Jones attended these after-school programs and watched the Bombers play. Though each of them were able to make a couple of trips to Butterfield, they went to Cornell University games more often. Jones said the close relationship he had with Welch motivated him to set up a meeting with him when it appeared that his football career would end after graduating high school.

“I grew a strong passion for my education, but I always wanted to play football,” Jones said. “I had that fire inside me. I had nowhere else to go. I was like man, I want to continue to do what I’m capable of doing. When I talked to coach, he’s a great guy. There are times where I go into his office, and he’s like another father figure for me.”

Welch knew Henderson and Jones from an early age. He developed a relationship with Henderson through the GIAC’s sports day programs, and he tracked both of their careers while the two were at Ithaca High School. Jones said it was the long-standing relationship he had with Welch that convinced him to apply to Ithaca. Welch said he always knew about Jones’ desire to continue playing football.

“He needed to focus on the academics and be able to get admitted here,” Welch said. “Of course he was, and then it wasn’t a question of whether or not he could play here.”

Henderson was a coveted prospect for teams in the region. Three Empire 8 schools, SUNY Brockport, The College of New Jersey and junior colleges expressed interest in him. The college also expressed interest and was able to get Henderson to come to campus for an official visit. He spent his visit with current senior safety Tom Scanlon, who Henderson said made him feel welcomed as more than a prospective student.

“He took me in like I was a teammate,” Henderson said. “Other visits I was a recruit, but when I came here, I was a family member. I was a Bomber already, and I felt that I couldn’t go anywhere else.”

Scanlon said he was surprised at how comfortable Henderson felt with him, since Henderson previously told him how he wanted a college experience outside of Ithaca. It turned out Henderson found the experience he wanted just up the hill in his hometown. He said the strong sense of community stood out to him when growing up in Ithaca.

The sense of intimacy that Henderson felt growing up was what Jones observed as the biggest drawback to growing up in Ithaca. Both players said they saw former teammates and friends go down the wrong path and waste their chances at having a future in football. Henderson admitted he had his regrettable moments but said football helped him learn from those mistakes and gave him an incentive to stay out of trouble. Jones said they found football and saw the sport as a blessing and a way to a better life.

“We were good at football, and football tradition here in Ithaca is strong,” Jones said. “Small Fry and up. You got family members who play Small Fry, Modified, JV to Varsity. The varsity games are just, oh man, when you make it to varsity, everybody is at the game, everybody is there. We found that. We were blessed to find that light, and we ended up finding that light, and it ended up getting us to where we are.”

Jones plans to use his sociology degree to be a mentor for youth, while Henderson said he tries to take things one day at a time and enjoy playing college football. Jones said he also lives in the moment, and he has already spoken to several youth including his cousins EJ and Elijah. He said he is aware of his position as a role model for the community.

“There are kids that are just looking,” he said. “They’re seeing it, and if we keep just doing what we’re doing, leading by example and preaching the right message, they’ll be here in no time.”