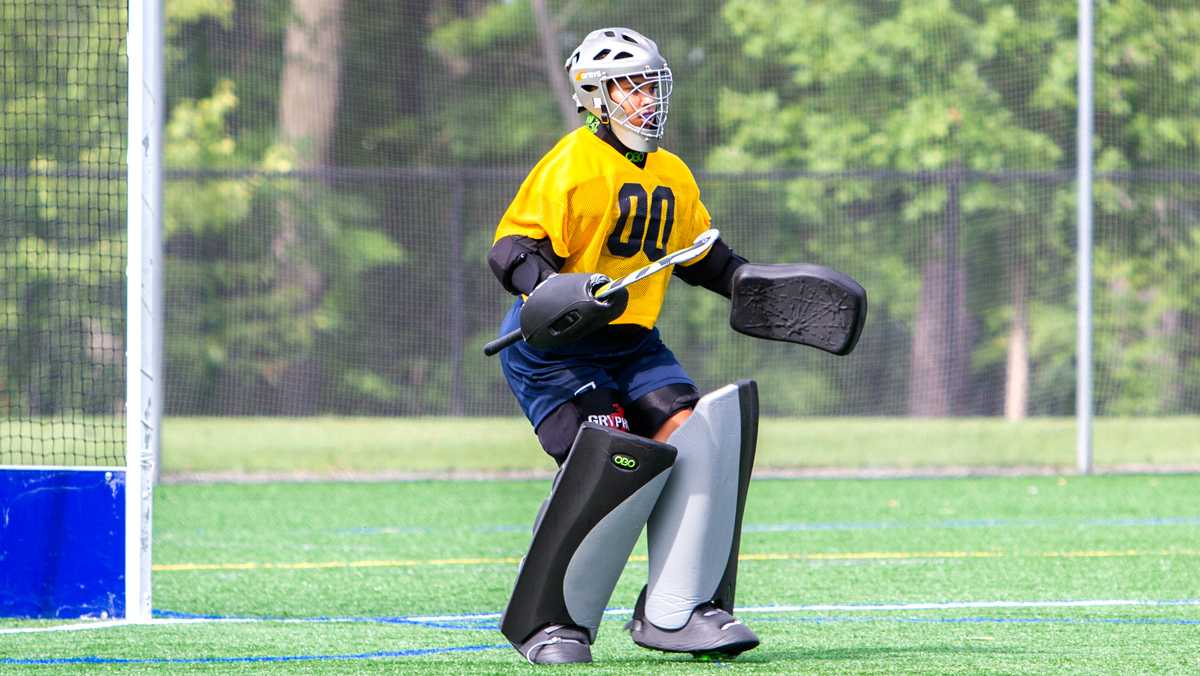 JULIA CHERRUAULT/THE ITHACAN
Sophomore Ariyahna Bernard gets ready to block a shot during her practice for the Ithaca College field hockey team August 22. Bernard also competes for the track and field team and participates in the fall, winter and spring sports seasons at the college.
By Jack Murray — Assistant Sports Editor
Published: August 28, 2018

The grind that comes with participating in college athletics requires full engagement. For Ithaca College sophomore Ariyahna Bernard, that commitment is tripled.

That’s because Bernard is a goalie on the field hockey team and also a thrower and high jumper on both the indoor and outdoor track and field teams. She appeared in four games for the Bombers field hockey team in 2017, recording 17 saves and a .773 save percentage. She was also named to the 2018 National Field Hockey Coaches Association Academic Squad. The Bombers had three two-sport athletes in 2017–18, not including track and field and cross-country, and sculling and crew, making Bernard currently the only three-season, two-sport athlete.

While participating in three seasons can be difficult, Bernard said she feels most comfortable always being in action.

While Bernard spent much of last field hockey season learning the ropes from the veteran players, she was able to step on the field and get some play time. Head coach Kaitlyn Wahila said she expects Bernard to continue to get better.

“She already has improved,” Wahila said. “Goalkeeping is one of those positions where you never know what is going to happen at any moment, and they need to be ready to come in and make saves. Ari did well last year, and we expect success again this year.”

The starting goalie for the Blue and Gold is junior Savanna Lenker. She said that Bernard pushes her in practice and is a very strong and athletic player.

“From the moment I met Ari, I was so glad we had somebody who was super athletic,” Lenker said. “Teams used to put a big girl in the net to take up as much space as possible, but now having fit goalies is the most important thing.”

Bernard said she fell in love with field hockey by watching her aunts play in high school and college. However, she wasn’t able to play the sport at the high school level until her sophomore year because she transferred high schools. On top of field hockey and track and field, she also played varsity basketball in high school.

“During my junior and senior year of high school, I was actually a four-sport athlete,” Bernard said. “I played field hockey, basketball, indoor track and outdoor track. Being able to meet so many different people and grow with three completely different team environments helped me become more well-versed with different types of people.”

While sports each have their own competitive season, most teams will train yearlong. Bernard often misses offseason training for both field hockey and track and field because of her commitments to each sport.

Bernard’s physical abilities stand out in track and field too. Sophomore thrower Samantha Healy said that Bernard is the definition of a true athlete.

“Ari, as a thrower, is always focused on her goals,” Healy said. “As a teammate, she is someone who always tries to bring people up and cheer them on to do the best they can do, no matter the circumstances.”

Although she misses valuable offseason workouts with both teams, Bernard said the skills she learns in each sport complement each other.

“Since I am a goalie, I must be explosive,” Bernard said. “Our work on that in track really helps because I throw and a lot of that energy comes from the legs, as does goalkeeping.”

Wahila said that Bernard’s strength improvement is noticeable — she stands out during weight training.

“She is really strong in the weight room in regards to bench press and squatting,” Wahila said. “She did great in our weight room testing, and you can tell that her work with the track and field team helps us for our season.”

While coaches expect a full commitment to their program, Wahila said that Bernard’s excellent attitude and her willingness to work hard makes her offseason absence acceptable.

“Ari is a fantastic athlete and is a strong kid physically and mentally,” Wahila said. “I think it is great that she is able to play the two sports she loves.”

Charity basketball tournament is nothing but net