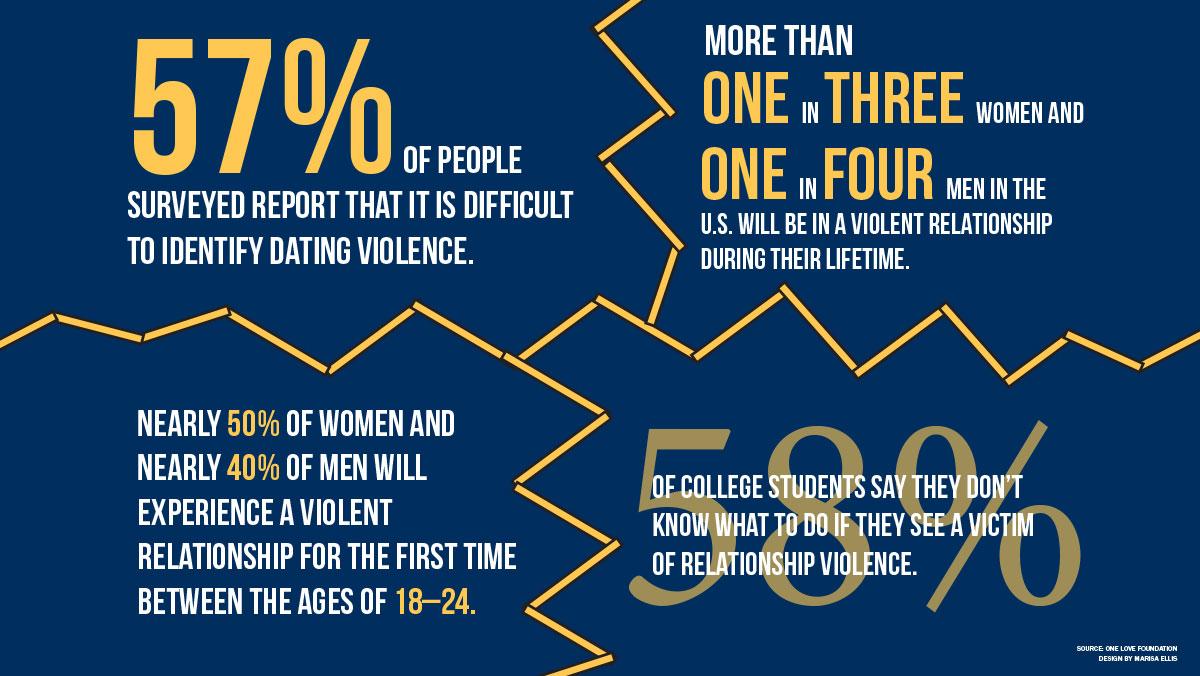 Student-athletes on the Ithaca College swimming and diving and lacrosse teams have joined the movement to spread awareness of relationship violence by holding workshops that educate and empower students to recognize warning signs.

With just three weeks before her graduation from the University of Virginia, senior lacrosse player Yeardley Love was brutally beaten to death by her ex-boyfriend, George Huguely V. For Love, May 3, 2010, marked the culmination of months of relationship violence at the hands of Huguely, who was also a lacrosse player.

To raise awareness about the warning signs and abuse that relationship violence is, Love’s mother, Sharon Love — after learning that one in three women and one in four men will experience relationship violence — founded the One Love Foundation, a title that combines Love’s number throughout her lacrosse career and her last name. To get college students across the country involved, the foundation created an “Escalation Workshop” to teach participants the warning signs of abuse. The swimming and diving and lacrosse teams at the college each held two of these workshops for their teammates, and they hope to expand.

Title IX Coordinator Tiffani Ziemann said she initially reached out to the lacrosse teams to see if they would be interested in implementing the workshop program at the college because she knew how successful it was on other campuses across the country. After watching the documentary “It Happened Here” in March, shown to athletes at the college, members of the women’s swimming and diving team also expressed interest in getting involved, senior Sara Yagan said.

Ziemann said one of the most important aspects of the program is that it gives students a space to talk about issues regarding relationship violence openly.

“People either don’t recognize the red flags in their relationships or in the relationships between their friends, or they don’t know what to do when they do see them,” Ziemann said. “This program encourages people to have conversations, to trust their guts and support their friends who may be in negative or dangerous situations.”

To hold the workshops, Yagan said members of both the swim and lacrosse squads had to be trained as facilitators. Twelve athletes from the swim teams and nine from the lacrosse teams volunteered to lead the workshop. Included in the 90-minute session is a 40-minute film that shows the duration of a full, and ultimately abusive, relationship and a 40-minute guided discussion led by the facilitators.

To create more of an intimate discussion, each sport broke the program up into two workshops in October and early November, made up of half the women’s team and half the men’s. Because it is a peer-to-peer model, Yagan said she found that her teammates were more actively engaged than they might have been in another environment because they are comfortable with one another.

“I think what’s special about One Love is it is students talking to other students, so personally, I feel like you get more of the message across because it’s not preaching,” she said. “In the training session, the facilitator should be speaking the least, and everyone else should be speaking the most, and it should be a conversation and not a lecture.”

Senior swimmer Gregory Markert said that while the film is a fictional depiction of an abusive relationship, it is a reality for so many. At the end of the film, he said, there is also a slideshow of photos showing victims of relationship violence, which is an additional reminder that this problem is very real.

“It seems dramatic, but that’s the dramatic part of it, that this really happens,” Markert said. “It’s something that happens across the country regularly, and it can get extremely bad, extremely quick. Not only is this something that we need to be aware of, but it’s something you can have an impact on personally in your own life.”

Junior lacrosse player Maggie Wise, who was one of the three facilitators on the women’s team, said a large part of the film also focuses on the bystander effect and how most of the time, friends, family and teammates are not necessarily aware of what the signs of abuse are or when to step in.

“A lot of times, people think abuse is just physical, where it’s really emotional, mental and physical, and I think a lot of the time, people don’t realize that,” Wise said. “What’s really important in regards to abusive relationships is the bystander effect, so if your friends see something, they should say something because you’re oftentimes too involved in the relationship to know what’s happening to you.”

Markert said he found the program to be very successful with his own team and that the ultimate goal is to spread the workshop to other teams and students on campus.

“It’s the unfortunate reality that it does occur with the highest volume among college athletes,” Markert said. “And I think what most people took away is that while we may not be the offenders, we can certainly do our part to fix the problem within our community because it is on us to make the change and affect that change.”