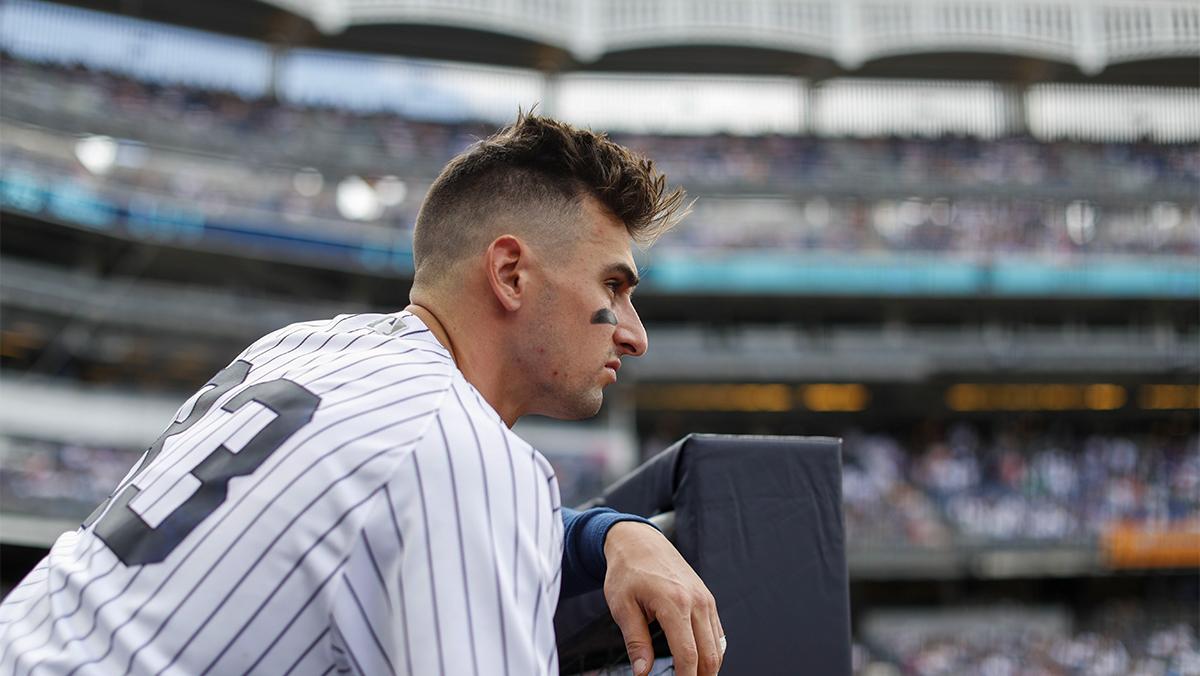 COURTESY OF NEW YORK YANKEES
Tim Locastro has made his mark in MLB as a stolen base threat. He set an MLB record with 29 stolen bases without being caught to start his career.
By Tommy Mumau — Sports Editor
Published: May 5, 2022

During his three seasons with the Ithaca College baseball team, Tim Locastro established himself as a force on the basepaths. Now, he takes the field 227 miles away from South Hill: Yankee Stadium.

Locastro is currently in his sixth season in MLB and his second with the New York Yankees. The outfielder is in the midst of his third stint with the organization after signing with the club as a free agent March 13, 2022. He was traded from the Los Angeles Dodgers to the Yankees Nov. 21, 2018, but was designated for assignment Jan. 14, 2019, and did not appear in a game. After spending three seasons with the Arizona Diamondbacks, Locastro was traded to the Yankees July 1, 2021, and appeared in nine games last season. His season was cut short when he leaped to make a catch in a game against the Boston Red Sox July 17, 2021, and tore his ACL when landing. Locastro was then claimed off of waivers by Boston Nov. 5, 2021, but he then elected free agency Nov. 30, 2021.

The outfielder then returned to the Yankees just three days after the MLB lockout ended, signing a one-year contract. Locastro began the 2022 season just below the MLB level in AAA with the Scranton/Wilkes-Barre RailRiders and was called up to the major league club April 17. Being raised in Auburn, New York, Locastro said he has enjoyed the opportunity to play for his childhood team.

“Growing up, you come to this ballpark and the old Yankee Stadium and that’s your dream and that’s your goal as a kid,” Locastro said. “Now you’re living the dream. It’s surreal, but it’s exciting because you want to help this team win baseball games. As a kid growing up, all you want to do is have the Yankees win games and the goal is still the same right now.”

Prior to manning the outfield for the Yankees, Locastro made an impact on South Hill as the shortstop for the Bombers. Cooper Belyea ’15, current assistant coach for the college’s baseball team, said he has been impressed by his former teammate’s accomplishments.

“It’s been awesome to follow him ever since he heard his name on draft day and it’s been really fun to kind of follow his career and see him climb the ranks,” Belyea said. “It’s been fun to watch a former teammate and friend live out his dream, and obviously being with the Yankees makes it that much more special.”

Locastro had appeared in 14 games with the Yankees this season before the team’s matchup with the Toronto Blue Jays on May 4, after earning a call–up by hitting .313 with a .421 on-base percentage in five games with the RailRiders. George Valesente ’66, former head coach of the college’s baseball team, said he is proud of Locastro’s efforts to return to the major leagues.

“I’m so excited for him, he’s certainly very well-deserving,” Valesente said. “He always worked very hard when he was here, and he just kept improving all the time. [He is] mentally strong, very mentally strong, pushes himself to get the most out of [himself].”

Throughout his career, Locastro has established himself as a threat to steal each time he reaches base. He successfully stole bases in each of his first 29 career attempts, which stands as the MLB record for the most consecutive stolen bases to begin a career. The Yankees have relied on Locastro’s speed during his appearances this season, as he had entered as a pinch runner in seven contests before the team’s game May 4.

Locastro’s first stolen base of the season played an integral part in the Yankees’ 5–4 comeback victory against the Cleveland Guardians on April 23 in the Bronx. He entered the game as a pinch runner at first base as the club trailed by a run in the bottom of the ninth inning. Locastro promptly swiped second base to get into scoring position and later came around to score on a double to knot the game at 4–4. The team went on to win the game later that inning on a walk-off RBI single by Gleyber Torres.

Yankees’ manager Aaron Boone said in his postgame press conference April 23 that he was impressed by Locastro’s ability to stay ready and make an impact when he was called upon to be a pinch runner.

“That’s one of his big roles right now,” Boone said. “We were going to be aggressive in that situation, and [Locastro] does a great job of making sure he gets a good jump and steals a big bag there to give us an opportunity to tie that game. Again, ready to go, prepared, knowing the matchup and a great job by [Locastro].”

Locastro’s speed has always been a key part of his game, stealing 52 bases in his 58 collegiate attempts. He swiped 40 bags in his junior season alone, setting the single-season program record. Valesente said Locastro’s quickness on the basepaths was apparent from the time he stepped on campus.

“We knew he had pro potential,” Valesente said. “The one characteristic when he first came here is he had just outstanding speed and base running instincts. … He just kept each year, seemed to be getting better and better and [had] more understanding of the game and how it’s played.”

Locastro also posted a .436 batting average and set a single-season team record with 71 runs scored in his junior year. These credentials helped him earn Empire 8 Player of the Year and All-American honors prior to being drafted by the Blue Jays in the 13th round of the 2013 MLB Draft following his junior season.

Locastro left the college after his junior season to begin his professional career and said he still technically has credits left to complete for his degree. Despite being nine years removed from his last at-bat with the Bombers, Locastro still stays connected to the program today. Senior first baseman and pitcher Buzz Shirley said Locastro’s story has served as an inspiration for him and his teammates.

“Being an Ithaca College Bomber, we’re family,” Shirley said. “Tim came on a Zoom meeting with us and obviously, he just kind of shared his words of wisdom and it was awesome to hear. … He really is the epitome of just showing you that anything can happen and [to] dream big.”

Locastro said he is grateful for the support he has received from role models throughout the stages of his baseball career. These figures include members of the Ithaca College community like Valesente and T.J. Gamba ’89, his baseball coach at Auburn High School.

Gamba said that as Locastro’s high school coach, he believed the speedster had the potential to take his talent to the next level. As a former Bomber, Gamba helped Locastro during the college selection process, as he was confident that Valesente and the rest of the staff could help elevate his game.

“I knew that if he went to Ithaca he would develop and he’d have every bit of a chance, professionally speaking, in the game,” Gamba said. “In addition to off the field, which would probably be even more of a plus [by] playing for Coach [Valesente]. … It ended up being a good fit for him all the way around.”

Valesente said that while coaching Locastro, he was impressed by the passion he has for the game. He said he believes Locastro will continue to have success at this level with the Yankees because of the enthusiasm and work ethic he brings to the ballpark each day.

“[He was] such a pleasure to have,” Valesente said. “From a coaching standpoint, if you have nine Tim Locastros on the field, you’re going to have an exciting kind of group that’s definitely going to be playing the game the way it should be played.”

Former student called up to play for the Los Angeles Dodgers