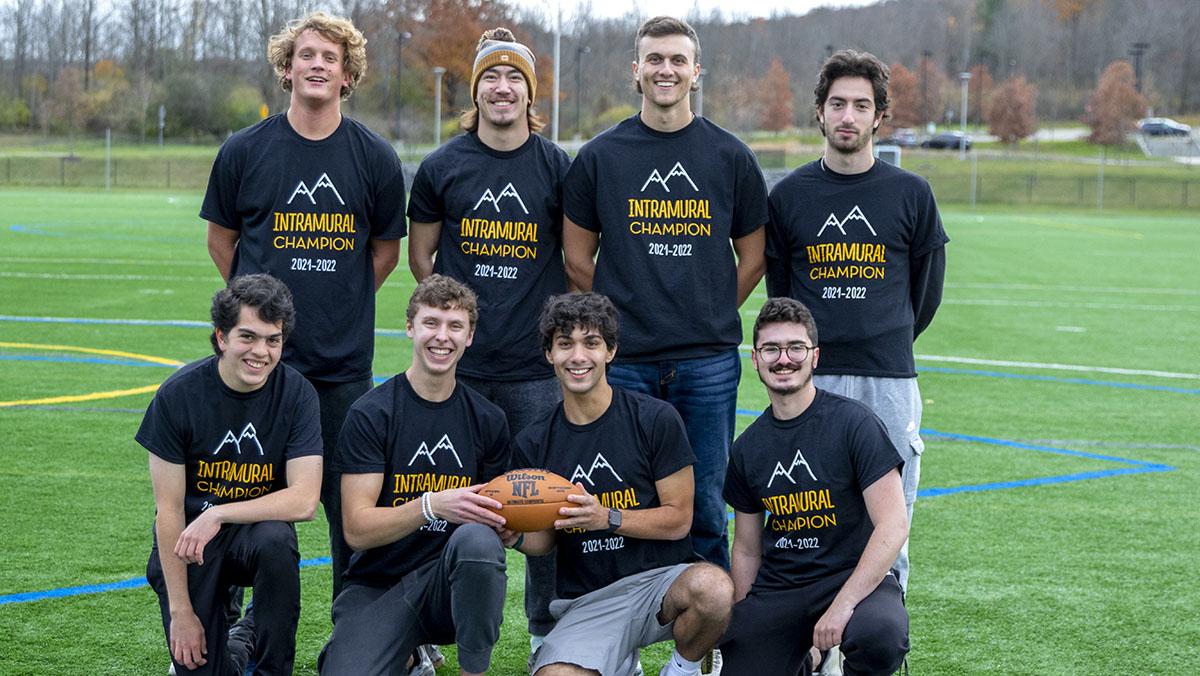 With the 62nd Cortaca Jug game having been played Nov. 13 between the Ithaca College and SUNY Cortland football teams, next up on the schedule is the 10th annual “Cortaca Mug.”

The Cortaca Mug is a game of flag football played between teams of students from each school that won their respective intramural flag football leagues. This tradition, which is between seven and 10 years old, will continue as part of the historic Cortaca Jug football game played between the schools. SUNY Cortland is permitting spectators and not charging for admission for the game, which is at 7 p.m. Nov. 18 at SUNY Cortland. The winners will walk away with the Cortaca Mug trophy — not to be confused with the Cortaca Jug — until next year’s game.

Lauren Hoffman, program coordinator for intramural sports at Ithaca College, said that although she did not come up with the idea, the Mug game was created by students.

“In the world of college recreation, it is all about creating the best experience for the students so institutions are always happy to share ideas and collaborate,” Hoffman said. “This collaboration is probably what led to the idea of the Cortaca Mug.”

Hoffman said this is a special opportunity for the students to go and play an intramural team from another school, and a reward to the championship-winning team from each school. Henry Bulkeley, a junior on Ithaca College’s championship team, expressed his excitement for the upcoming game after he thought his team’s season was over.

“When we found out that we were playing [SUNY] Cortland, that was super exciting for us,” Bulkeley said. “I know that this was our first time playing intramural, so to be able to win intramural at Ithaca and then find out we could play Cortland was really cool.”

Even though this was the team’s first season playing, team captain junior Tristan Read said the group formed its team during Spring 2020.

“We’ve been getting ready for [the season] for a long time,” Read said. “We always played football every weekend and we’ve been waiting to play intramural since freshman year because of [COVID-19].”

Bulkeley also commented on the long wait, saying the group had been talking about the chance to play for over a year.

Anticipation will not be the only motivation for the team. Bulkeley said after the Bombers lost to the Red Dragons on Nov. 13 by the score of 28–27, he and his friends want to win the Cortaca Mug even more now.

“That’s the elevator right there,” Bulkeley said. “Especially when you’re out in the cold and see [the Bombers] lose, there’s nothing that [angers] you more than a [Red Dragons] fan, so to get revenge would be pretty sweet.”

While Read said that getting revenge on the Red Dragons would be rewarding, the team was already excited enough for the game before the Cortaca Jug game was played. However, with busy schedules this semester, Read said it has been difficult getting together to get ready for the season. But, he hopes to take the success from the regular season into the Cortaca Mug game.

“A few of us have gone and practiced and talked about what we’re going to do,” Read said. “We already have our game plan set and it worked pretty well during intramural football at Ithaca and we’re expecting it to work against [SUNY] Cortland too.”

Since the college was remote during Fall 2020 intramural sports were not able to be played. However, despite missing out on intramural sports for the 2020–21 academic year, Hoffman said the leagues have been a success so far.

“I think since students were mostly attending school virtually last year, … they began to miss the opportunity to socialize and enjoy the fun time with their friends so they are taking advantage of it now,” Hoffman said.

Bulkeley said his experience with intramural sports this year was fun but also welcoming. The teams had sportsmanship grades given during the year to ensure there would be no bad blood, but most of the competition was just friendly competitiveness.

“As far as the people there, everyone was really good and active and sportsmanship spirits were good so it was fun to play.”

Bulkeley said the players have been telling their friends to drive out and watch the game.

“We’re starting to spread the word about the game and get a bunch of people to come over,” Bulkeley said. “We think it would be cool to have some fans there.”

With the success of the intramural leagues so far, Hoffman said the two colleges plan to play this game again next year as long as there are no availability issues. Bulkeley was enthusiastic about discussing whether this game should continue to be a tradition.

“I 100% think it should be [a tradition] and I think it’s a really cool event,” Bulkeley said. “It furthers the rivalry which I always think is good and it just gives us another chance to beat [SUNY] Cortland.”