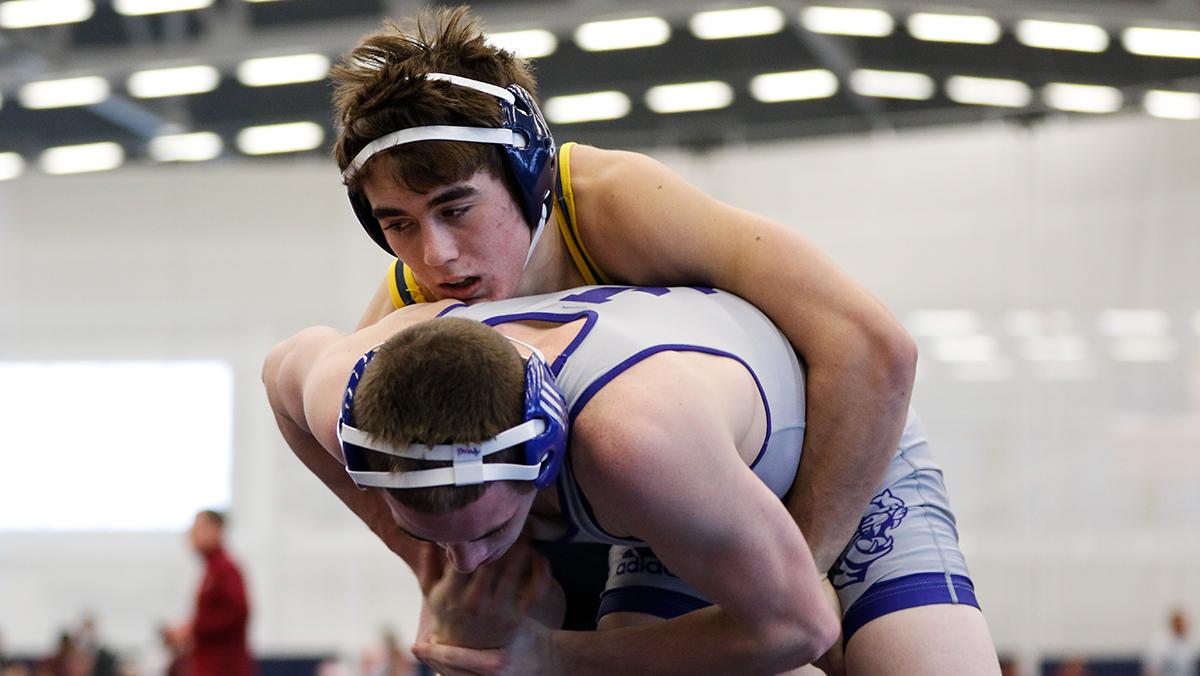 Since losing to a Division I opponent from West Virginia University on Nov. 13, freshman wrestler Sam Schneider has honed in on being the best.

After an unprecedented 21 wins in a row, Schneider finds himself ranked No. 3 in the 149 pound class by the National Wrestling Coaches Association.

Schneider said he took up an interest in wrestling from a young age after watching his brother, Steven, have a successful high school career at Park Ridge High School in Park Ridge, New Jersey. That eventually led Steven to The College of New Jersey, where he was a member of the wrestling program.

By the time Schneider first stepped onto a mat in the third grade, he said, he knew what to expect.

“I learned how to wrestle before I actually started wrestling,” Schneider said. “I followed his footsteps in everything.”

Schneider visited the college and met assistant coach Marc Israel ’05. Schneider said Israel personally spoke to him and made the college a hard offer to pass up.

“He was a big reason I wanted to come here,” Schneider said. “And it was on the trip home where I said, ‘Yeah, I’m coming here.’”

Head coach Marty Nichols said he was drawn to Schneider during the recruiting process because of his well-rounded personality.

“When you recruit kids, you sit down with them and talk to them about wrestling, you talk to them about family and all different types of things,” Nichols said. “He had that presence about him, and those are the guys we like to bring in.”

Freshman Al Ciccitto said he met Schneider early on in the preseason and, through training, realized Schneider would be a dominant wrestler.

“His technique was impeccable,” Ciccitto said. “His explosiveness and athletic ability make him a great athlete. He always does what the coaches ask of him and more.”

In Schneider’s debut at the season-opening Ithaca Invitational on Nov. 4–5, he won all five of his matches.

Schneider said his goal was never to go undefeated on the year but the loss served as motivation for him to go out and compete even harder.

“It was motivating,” Schneider said. “You learn a lot from those losses. After that, I thought: ‘I’m still young. I’ve got time to develop and get better.’ I got beat up in that match, but I felt like I could wrestle with him.”

Since the loss to Dekrone, Schneider has gone 21–0 and has posted a 5–0 record in the Empire Collegiate Wrestling Conference.

Schneider said having a good mindset and a love for wrestling are the fuel to his game. He also said it is important to stay ahead of his opponent.

“We watch a lot of film, and I pay really close attention to the details,” Schneider said. “Going out in match and knowing what your opponent is going to do next is huge. I like to be two, three steps ahead, and it’s been working.”

Outside of his wins, Schneider said the hardships the sport of wrestling entails have helped him value the camaraderie the wrestling program has cultivated and instilled in its athletes.

“It’s a lifestyle,” he said. “We have to constantly pay attention to our weight, practice technique. There’s just so much that goes into it, and there’s very few people at Ithaca that understand, and that makes us closer together. We’re the only ones who are doing this.”

Schneider said two of his 27 wins stand out above all the rest: the wins against the No. 2 and No. 4–ranked opponents in the country.

It was after his 11–5 win in the New Standard Corporation Invitational on Dec. 3, in which he defeated Danny Downes, senior captain from Roger Williams University and the nation’s No. 2 wrestler at 149 pound, that he knew he could be one of the nation’s best, he said.

“The goal became realistic,” Schneider said. “And once that happens, you just start believing so much more and start pursuing it harder.”

Sophomore Demitri D’Orsaneo said the wrestling team truly is one big family that Schneider has seamlessly become a part of.

“He slid in perfectly,” D’Orsaneo said. “He has the right attitude at practices. We can just be one family, and Sam is really good at that. We can throw heavy hands, and at the final whistle, we’re giving each other a hug.”

As the season heads toward tournament time, Schneider said, his goal is plain and simple: to win a national title.