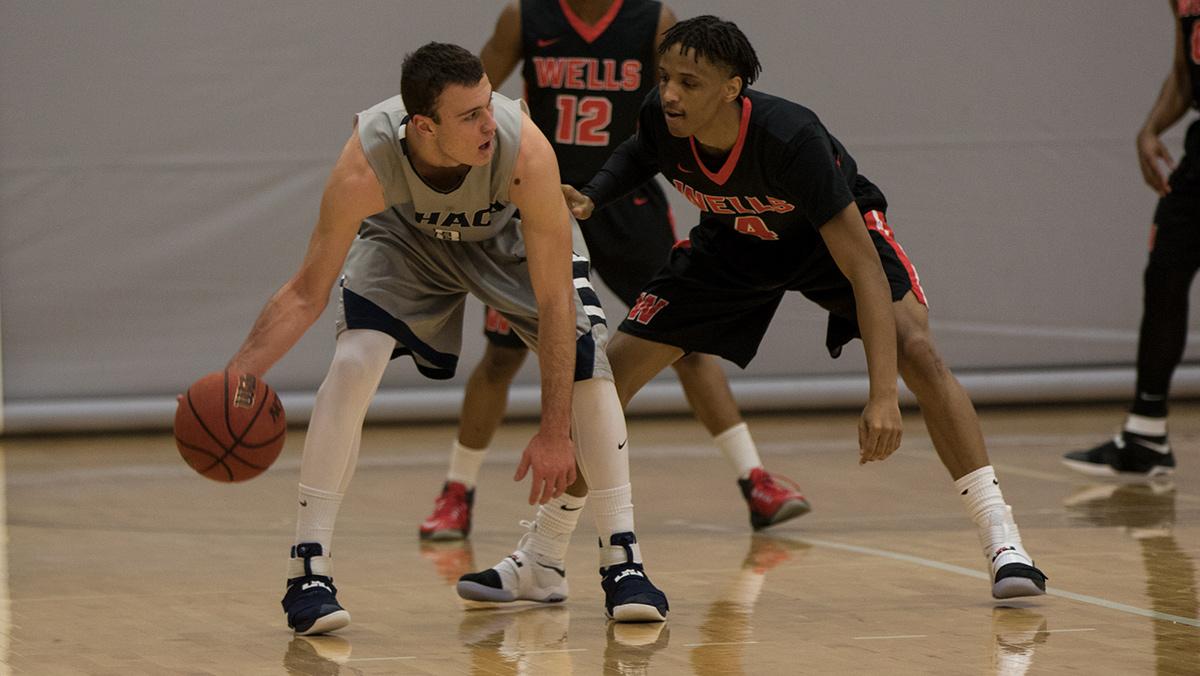 When junior guard Marc Chasin surpassed his 1,000–point mark Nov. 19 against SUNY Purchase, he didn’t know he had reached the milestone until after the game. His main focus was on scoring points and helping the team win.

Staff Writer Samantha Cavalli spoke with Chasin about surpassing the 1,000–point mark, goals for the team for the remainder of the season and what he would like to accomplish before he graduates.

Samantha Cavalli: Before coming into the game Nov. 19, did you know that you were close to the 1,000–point mark?

Marc Chasin: My coach had told me where I had stood. There was a chance, he had told me, to get it in the game before because it was reachable, but I ended up not getting it. So I was like, pretty close to getting it.

SC: Describe the feeling of when you knew you scored your 1,000th point.

MC: I actually didn’t really know exactly in the game when it happened. I ended up scoring over 30 points that game, so I knew that I had gotten it. I wasn’t sure exactly what point in the middle of the game it was. Honestly, it was a goal that had been attained, and I knew that it would get achieved this year when the season had started, but it wasn’t my main focus at all. I just wanted to go out there and play my game and not worry about it. The end goal was to just win basketball games.

SC: How was the game going leading up to when you made the shot, making it 1,000 career points?

MC: We were a little bit ahead, and I was actually on the bench. One of our assistant coaches knew when it was going to happen, so he had videotaped it. Looking back on it, we were up maybe by like five or six points. We had just gone on a run to take the lead during the game with about five to 10 minutes left in the first half.

SC: Was this your ultimate goal for this upcoming season or goal when you started playing college basketball?

MC: Honestly, I wouldn’t really even consider it a goal. It’s kind of something that just happened, and if it was going to happen, then it happened. I would consider it more like an achievement. Obviously, it is nice to have, and it’s a cool recognition, but like I said, the ultimate goal is to win, and if you can do that and win, then that just makes everything perfect. I would say the ultimate goal is to win basketball games and play as good as I can.

SC: Being halfway through the season, and as co-captain of the team, where do you see the rest of the season going?

MC: I think we are just as talented as any team in the league. I think we have a pretty good, well–spread–out league in terms of how the other teams can compete with each other. It will really be interesting to see how it all shapes out, and I think that everyone can compete with everyone. I definitely think that we should be looking at ourselves as a frontrunner to win the Empire 8.

SC: In your opinion, would you consider this to be one of your biggest accomplishments in your basketball career?

MC: I want to say that my biggest accomplishment has yet to come. Nothing beats team success, and obviously, our goal is to win the Empire 8 Championship. It’s a nice individual achievement, but it’s definitely not the best one I’ve ever had or what I have my eyes set on this year and for the future.

MC: With the way my career has gone so far, I’ve gotten a lot of individual recognition, whether it was Rookie of the Year my freshman year, last year when I was First-Team All-Conference, and now with the 1,000 points. Nothing even comes close to being able to win an Empire 8 championship and advancing through the NCAA tournament because that is just something you build memories with your teammates, and you work hard together as a team. It’s nice to see those hours pay off for the ultimate team success, which is just way better than any individual accomplishments or goals.