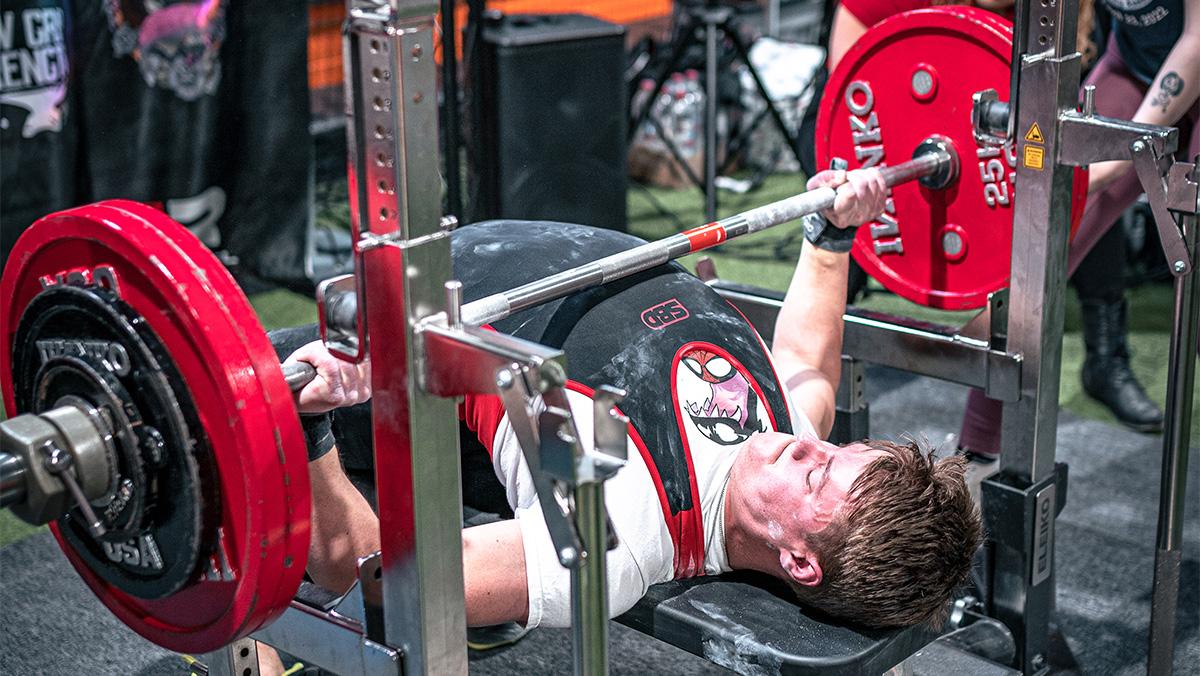 Courtesy of John Morris
Ithaca College senior David Alstott, who will attend graduate school at Columbia University in the fall, set a Connecticut state record in bench press in a competition April 23 with 155 kilograms.
By David Schurter — Staff Writer
Published: May 4, 2022

Since Ithaca College senior David Alstott was a child, he dreamt of breaking a state record of any kind. He was on the swim team in high school, but on April 23, he got his record in the sport of powerlifting.

Alstott, a Connecticut native, broke his state’s record in the bench press, pressing 155 kilograms (341.72 pounds), breaking the previous record of 150 kilograms, or 330.7 pounds.

“It means a lot to me,” Alstott said. “Ever since I was a kid, whatever sport I was playing, being able to hold a state record for any sport is something I’ve been striving to do and to finally make that happen is a dream come true, to see all the hard work come to fruition.”

Ithaca College is known for its athletics, both for varsity and club teams, but one sport the college does not have is a powerlifting team. Powerlifting is a sport that consists of bench press, squats and deadlift. In competition, the lifters will complete three repetitions at a maximum weight in their chosen discipline. Alstott, who competes in the bench press, said he could not be happier about earning the record.

Alstott said he has had a tremendous amount of support from his friends and family, especially his gym friends. He is a part of a group at Flexx Training Systems, an online customized coaching service where he works with a community of other powerlifters. Alstott said he feels that there is a sense of community with his gym friends and said how much they have helped him reach his goals.

“Being on a team where I have a lot of people to look up to and push myself toward has been really helpful,” Alstott said. “The people who are in the gym with me, we have a bit of a community there and we support each other’s lifts.”

For powerlifting, anyone can enter meets and compete as an individual, like Alstott. Some meets require qualifying totals, but weightlifters can still enter unaffiliated with a college or program.

Alstott also said that being a part of this team has been beneficial for him and his well-being. Having a group that supports not only his training but also his social life has helped him balance his life.

“I’m so lucky to say that I have such an amazing social support system,” Alstott said. “This has benefited not only my lifting but also my mental and emotional health.”

Junior Dylan Henderson, one of Alstott’s gym friends at the college, said his relationship with Alstott has grown recently through working out together.

“We got a lot closer this past year, especially in the fall,” Henderson said. “We were introduced to each other through a mutual friend, and we have gotten closer ever since. We are always trying to help each other out and improve, especially lifting each other up and brightening the mood.”

Henderson also said how impressive it is to watch Alstott up close and personal as well as being able to help him accomplish his goals.

Aside from his gym friends, he said his biggest supporters are, by far, his parents. Anne Alstott, David’s mother, said she was extremely excited to see him finally accomplish one of his biggest dreams.

“I am so thrilled for him,” Anne Alstott said. “He is such a hardworking young man and, to see this pay off, I am just so happy for him.”

Anne Alstott said how David Alstott has had this drive to improve since he was younger, and that being goal-oriented has helped him become the athlete he is today.

“Ever since he was little, he has been all about hard work and he is so goal-oriented,” Anne Alstott said. “That’s just a part of who he is, he has a real drive.”

Leading up to the meet April 23, David Alstott said he worked for two months to get ready for competition, including rest days and heavy workloads.

“[It was] about eight weeks of ramping up intensity and weights followed by a lighter week to rest my body,” Alstott said. “The last week we call ‘taper,’ as just before a taper, you feel exhausted.”

Recently, Alstott made the decision to attend Columbia University starting in the fall as a graduate student. After finishing his B.A. in psychology at Ithaca College, he will be joining the School of Psychology at Columbia where he will work for his master’s degree in clinical psychology.

“I searched for the best programs in clinical psychology and Columbia was at the top of the list,” Alstott said. “Columbia was my first choice because not only is it a great school, but it also offers the best program for what I want to do, it’s in New York City and there are a lot of research opportunities.”

Although Alstott is at the end of his undergraduate days in college, he is hoping to continue to powerlift for a long time. He said powerlifting will still be a big part of his life, but not as his primary focus as he attends Columbia in the fall. In the long term, Alstott wants to earn his Ph.D. in clinical psychology.

“The good thing about powerlifting is that it’s not going to be a huge priority in my life,” Alstott said. “It will never take the place of schoolwork or my relationships. I think it is something I can carry around with me and make it happen, see where I can take it.”