IC students kick back by volunteering with youth soccer teams 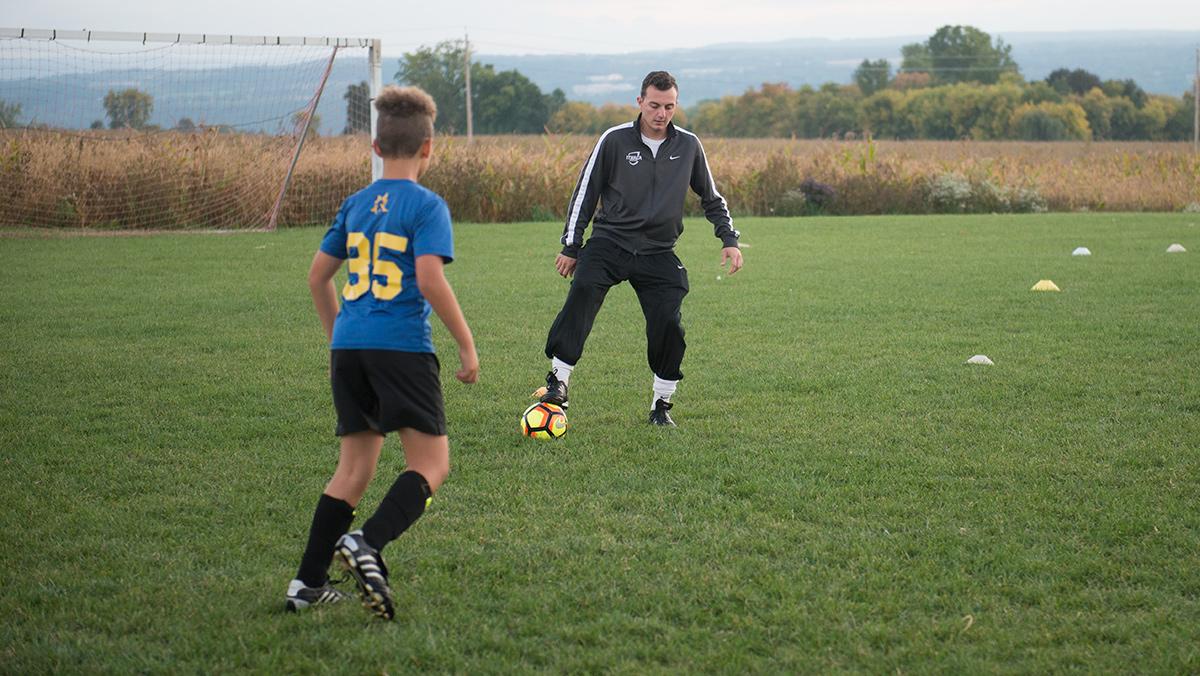 Two to three times a week at a local soccer field, junior Nicholas Gualtieri and sophomore Kate Hutton trade in their jerseys and shin guards for a whistle and clipboard. Gualtieri and Hutton are volunteer soccer coaches for local youth teams, passing along the soccer knowledge and passion they have accumulated throughout their playing careers.

“If I can give kids life lessons, I’ll take that any day over teaching them soccer skills,” Gualtieri said.

Gualtieri, who is on the men’s club soccer team and has been playing soccer for 15 years, started coaching four years ago with the TC Waza Academy, which has teams of children ranging from age 4 to 19, in Lansing, New York.

“I really enjoy coaching during the game because it’s a split second decision, and you keep them motivated and working,” Gualtieri said. “I like coaching young kids because you see huge improvements over the season.”

Currently, Gualtieri coaches soccer two to three times a week with different teams and sometimes on the weekends. He said he enjoys coaching the younger kids more, and specifically, girls in the 8- to 10-year-old range.

“The boys are more interested in shoving and laughing, but the girls are more focused,” Gualtieri said. “With the young kids, it’s more about entertainment, keeping them moving and getting them to enjoy it. What I try to do is hide coaching behind games and stuff like that. Little things keep it more interesting.”

Usually, there are about 10 to 20 children at any given practice at the Academy. The maximum number of players with one coach is 15, and with younger kids, no more than 10 players at a time.

Gualtieri said he would not choose to coach as a career, but he would definitely want to continue coaching in the future. He was offered an assistant coach position for the modified team in Lansing this past year, but did not end up taking it because he didn’t know how much time he would have.

On Mondays, he goes straight from coaching to his club soccer practice.

“That transition is interesting because when I’m with them, I’m focusing on my practice later,” he said. “Sometimes, I coach over their heads and I have to simplify down to the basics.”

Hutton began coaching just two weeks ago. She is a member of the Ithaca College club soccer team and was offered an opportunity to coach for the Tioga County Youth Soccer Association for the Newark Valley team by one of her professors, Jamie Rombach. Hutton now works with two parent volunteers to coach the team.

“My stats teacher asked anyone on the first day if we played any sports,” Hutton said. “Five or six of us raised our hands. She said that she needed help coaching, and I asked to help, and she said she would take all the help she could get.”

Rombach said Hutton has been able to meet with her to share her ideas and plans for helping the kids get better with the skills of the game.

“When we take that into practice, all of us benefit from her positive, encouraging attitude and experience,” Rombach said.

Rombach said Hutton has a knack for working with 8-year-old kids. She said Hutton has the skill development and game playing strategies and ideas that she gets across to the team during practices.

“The other volunteer parent coach and I are new to this and we enjoy her teaching all of us,” Rombach said. “The kids especially love the drills that she builds into fun games. We are so lucky to have her as a volunteer.”

However, Hutton has not coached before, and she said the toughest part is thinking of drills that match the children’s different skill sets.

“When I plan something, I have to remember that this is something they are just learning to do, and it makes me step back because I have been doing this for so long and it comes as second nature to me, and it is their first time,” Hutton said.

Hutton said coaching younger kids is a very rewarding experience and that it reminds her of when she was learning how to play.

“I have been playing soccer for so long that coaching them brings me back to my soccer days,” she said. “I do all the drills and stuff that I did with them. The best part of it is the interaction with the kids.”