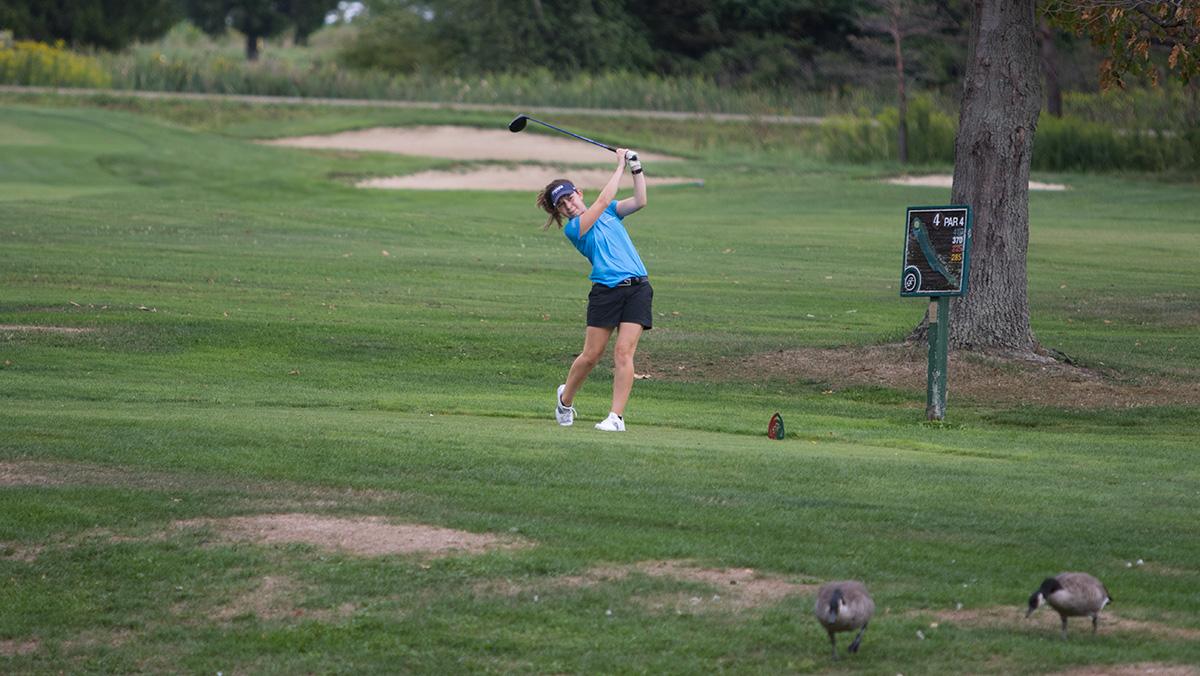 On a sunny day in the middle of summer, when freshman Peyton Greco was only 3 years old, her father took her out to their backyard with a set of golf clubs. Ever since, Greco has been hooked on the sport.

Greco went on to become a competitive golfer and play on the international stage in 2015 at the International Junior Golf Championship a year before joining the Ithaca College golf team as one of two freshmen.

Greco said that the first time she competed in golf was at the age of 9, when she played in the Metropolitan Junior PGA Tour in New York.

“It was nice to just start that, and to stick with that, and to see how you have improved over the years,” Greco said. “From when you were 9 shooting 67 for nine holes versus when you are 18 and shooting 78 for 18 holes.”

When Greco was in seventh grade at Nesaquake Middle School in Saint James, New York, she, along with two of her friends, decided to try out for the varsity golf team at Smithtown High School East. On the last day of tryouts, Greco said, head coach Bob Woods pulled the three girls aside to tell them that they had made the team — as middle school students.

“We screamed, and it’s not good to do that on the golf course, but we screamed,” Greco said. “We were so excited because it just doesn’t happen. It was so good. It was exciting.”

Once Greco made the varsity golf team, she decided to quit playing basketball — a sport she had been playing since she was 5 —  to focus on golf.

During her time on the varsity golf team, Woods said, Greco was one of the best players Smithtown had ever had and her contribution to the team was immeasurable.

“She was at the heart of creating an environment within HSE golf that is moored to fairness, honesty, respect and passion,” Woods said. “These are the foundations upon which success rests. People with great character have the capacity for great success.”

Part of her success was leading her team to a Long Island Championship when she was only in eighth grade. Since then, she has achieved All-League status six times and All-County five times, along with being her team’s MVP three times. She was also All-State for the past three years, meaning she finished in the top 20 at the New York State Public High School Athletic Association State Championship.

Her participation in the Metropolitan Junior PGA Tour gave her the opportunity to play in the International Junior Golf Championship in California during the summer of 2015. This allowed her to play with girls from all around the word, including the girls in her group who were from Hong Kong and New Zealand.

Greco said this experience gave her the chance to see how she compared to girls from other countries.

“The field was bigger, and the competition was bigger, so there were definitely nerves,” Greco said. “But at the end of the day, I feel like it’s just such a good experience to play with girls who play under par normally. That’s just how they play golf, so that was cool.”

Now that she is in college, she no longer qualifies to play on the tour, but Greco said she is glad to still have the opportunity to continue to play golf.

“When I finished my high school county and state championships in June, I was thinking, ‘That had the potential to be the last time I played golf if I hadn’t come to Ithaca.’ So I was so excited. It hit me that I wasn’t done yet,” Greco said. “I have so many more things I want to accomplish and so many more goals. I want to enjoy every second of it.”

Two key skills Greco said she has been working on are her short game — putting the ball into the hole — and chipping — hitting the ball onto the green — which helped her place 21st in her first college tournament with a score of 169.

One of the main goals Greco said she has for her time at the college is to make it to the NCAA golf tournament.

“I think she’s going to have great success on our team,” Rooker said. “She is motivated and committed to improving on a daily basis. She is open to making swing or strategy changes, and she asks questions to increase her knowledge of the game. I believe she is on the correct path to make a name for herself in our program and our conference.”

Head coach Molly Braid said Greco’s attention to detail and her experience playing in big tournaments will set her up for a successful career.

“Peyton will not only benefit the team with her low scores, but she sets a great example of doing the small things that most don’t like to do in order to elevate her game,” Braid said. “She has played in some big tournaments as a junior golfer, and on courses that are much more challenging than most courses we see. Having these experiences behind her will only help gain confidence and perform at a higher level during college.”

As the season continues, Greco said, she is excited to see what she will be able to achieve.

“I’m really looking forward to the experience that playing in collegiate–level tournaments will give me,” Greco said. “I can’t wait to see what this season has in store not only for me, but for all of the other girls on the team.”