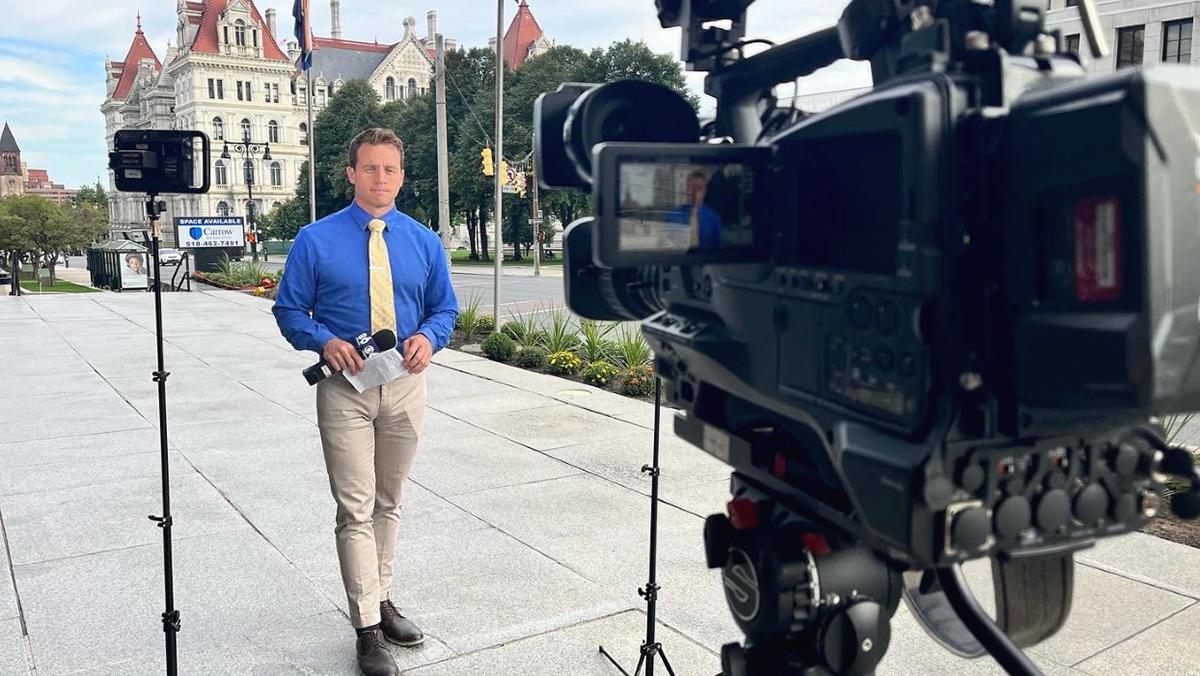 COURTESY OF BRIAN PURCELL/WRGB PHOTOGRAPHER
Since graduating from Ithaca College, Tom Eschen '11 has held many different positions in broadcasting. Recently, he accepted a job with CBS6-WRGB.
By Andrew Roberts — Contributing Writer
Published: October 26, 2022

Ithaca College has alumni that have succeeded in many different careers, and since attending the college, Tom Eschen ’11 has gone on to work in the sports broadcasting field.

Eschen recently accepted a new position as a news anchor and reporter at CBS6-WRGB in Albany, all while he continues to expand upon his broad array of experience in broadcast media since graduating from the Park School.

Before CBS6, Eschen spent the last 11 years of his career showcasing his versatility working at several broadcast networks, including Lax Sports Network (LSN)/For the Fans (FTF). Before joining CBS6, he served as a sports anchor, sports director, host and has also done play-by-play for a wide variety of sports. Eschen’s website says he has done work in all parts of the broadcasting world, including anchoring, reporting, shooting and editing.

Contributing writer Andrew Roberts spoke with Eschen about his career path and advice for students looking to make it in the sports broadcasting world.

Andrew Roberts: What are some of the things you always do before going on the air?

Tom Eschen: It depends on what I’m doing. For a play–by–play broadcast, I just do a thorough review of my notes. I make sure I understand some of the more important parts of what’s going on for the players: streaks, slumps, things of that nature. … If I’m actually there and not doing it remotely, I get a sense of where everything is on the field, where my sight lines are and what my noise levels are. I also make sure I know my promotional material.

AR: What do sports broadcasters do?

TE: I think the best sports broadcasters succeed in opening up the world of sports to people who don’t necessarily love sports. They try to transcend that gap between sports experts and casual sports fans. I think that’s what the best sports broadcasters do in any role. They could tell the backstory of a player who came from nothing, and now here he is succeeding at the highest level; they tell a story that can relate to a lot of people. I think the sportscasters that are the best are themselves and don’t try to go over the top or be someone they’re not.

AR: What qualities must you possess to be a successful sports broadcaster?

TE: Speaking from my own experience and from what I’ve seen, a big thing is really immersing yourself in whatever topic, place, sport or team that you’re covering. To be successful, you have to be an expert at the end of the day. … If you’re just doing it at an arm’s length, without really doing the work, research and preparation, you’re not getting the full story and you might not tell the story the right way.

AR: What kind of classes and extracurricular activities should one focus on if they want to be a sports broadcaster?

TE: I would say as many extracurriculars in communications as possible. They each give you opportunities to explore, be creative and do your own thing over time. It’s just consistently doing those things. Some people would dip in and then do other things the rest of their college career. I think being really consistent until you know what you want to do is really important. You can really recognize the different facets of media and how stories are told in different ways, and I think that makes you stronger at the end of the day.

AR: Is there a typical career path for sports broadcasters?

TE: Ideally, you go from a small market to a medium market to a big market, and then you’ll be set for life. But I don’t think it ever works out like that, at least from what I’ve seen. Some go from a small market straight into a big job like play-by-play for a pro team through their networking, connections or talent. Then you have others in the business that do some different things, like going from sports to news. I don’t think there’s a typical or a right path to take. … The earlier you can recognize where your priorities lie, the better off you are. There’s always going to be a choice of what your path is going to be. You have to expect the unexpected.

AR: What would you recommend to someone who wants to be a sports broadcaster on air?

TE: First, be yourself, don’t try to be someone that you’ve seen or think is successful. Also recognize that, like anyone else, you’re part of a team. There’s a lot of people behind the scenes that help make that product work. If you really want to be successful, you have to recognize what everyone brings to the table when it comes to putting something on the air. It makes the product better when you recognize the talent you have around you. … The last thing I would say is that you’re going to make a lot of mistakes, but it’s about how you move on and deal with that failure. You’re never going to know everything. There’s people that have done it longer and better than you, but if you try and learn from them you’ll become better.