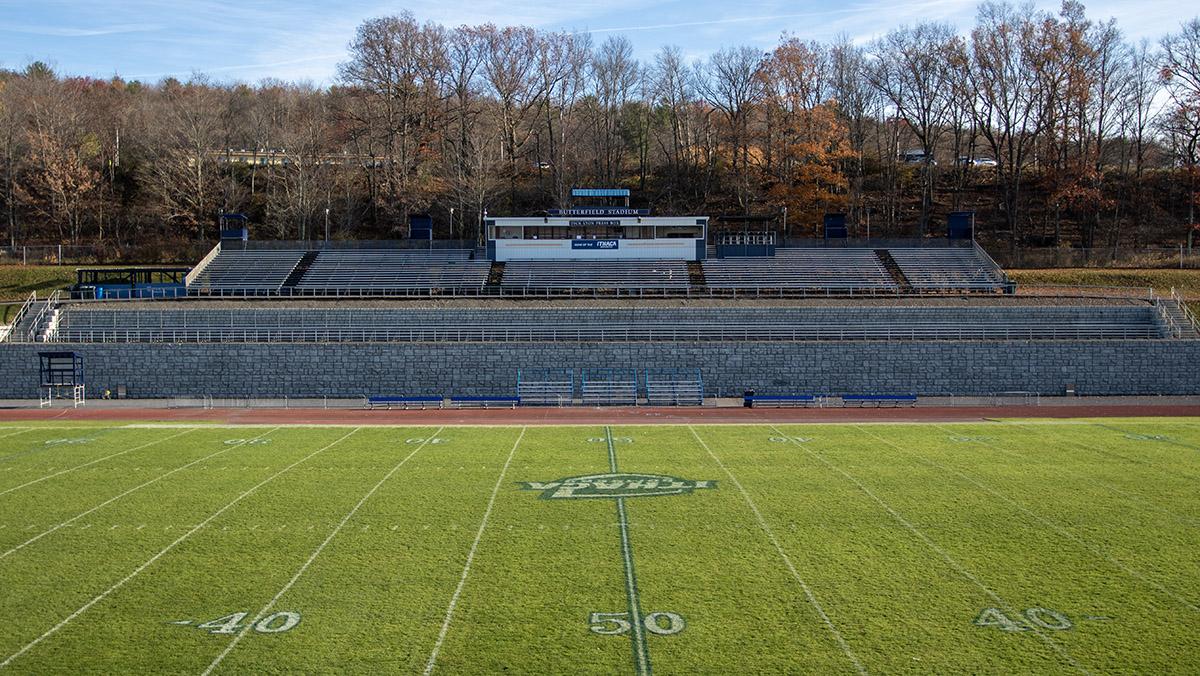 Malik Clement/The Ithacan
Butterfield Stadium, the home of the Ithaca College football team, will receive an artificial turf playing surface after a donation by an alum. The venue will be renamed to Bertino Field at Butterfield Stadium.
By Daniel King — Assistant Sports Editor
Published: November 29, 2022

As the Ithaca College football team continues its NCAA tournament run, Ithaca College Athletics has announced it has received a donation of $3 million to upgrade the home playing field for the Bombers, Butterfield Stadium.

In the announcement posted Nov. 29, the athletic department announced Monica Bertino Wooden ’81 will be funding the project through her donation. The funds will go to replacing the current natural grass field with artificial turf and adding lights to the field. Following the installation, the playing field will be referred to as Bertino Field at Butterfield Stadium.

“Monica Bertino Wooden is truly an inspirational leader, accomplished entrepreneur and thoughtful philanthropist,” Susan Bassett, associate vice president and director of Intercollegiate Athletics, said in the announcement. “It means more than words can convey to have a former teammate and Delta Psi Kappa sister make such a commitment to Bomber success. The value of this generous gift impacts our football program, first and foremost, but extends beyond that, as these alterations will greatly increase opportunities for the use of Butterfield Stadium by other athletics programs and the wider campus community.”

In the announcement, head football coach Michael Toerper acknowledged that while the field has a historical meaning at the college, upgrades to the playing field are needed.

“We must consider and value the experience of our student-athletes,” Toerper said. “Replacing the grass field with an artificial surface and adding lights will allow us to practice using the same field conditions that most of our competitors have. The consistency and efficiency of our practice situation will allow even greater attention to detail in our training and preparation, not to mention the benefits it will bring to recruiting.”

The announcement went on to state that the 400-meter track and field facilities around the stadium currently would be relocated to Yavits Field. Future upgrades are also planned for seating areas at the stadium and the Dick Lyon Press Box.

The turf installation will be handled by Clark Companies, which has overseen the building of athletic facilities, including the turf at MetLife Stadium and Schoellkopf Field at Cornell University.

The project is slated to start in Spring 2023 with a projected completion date before the start of Fall 2023 and the first football home game.