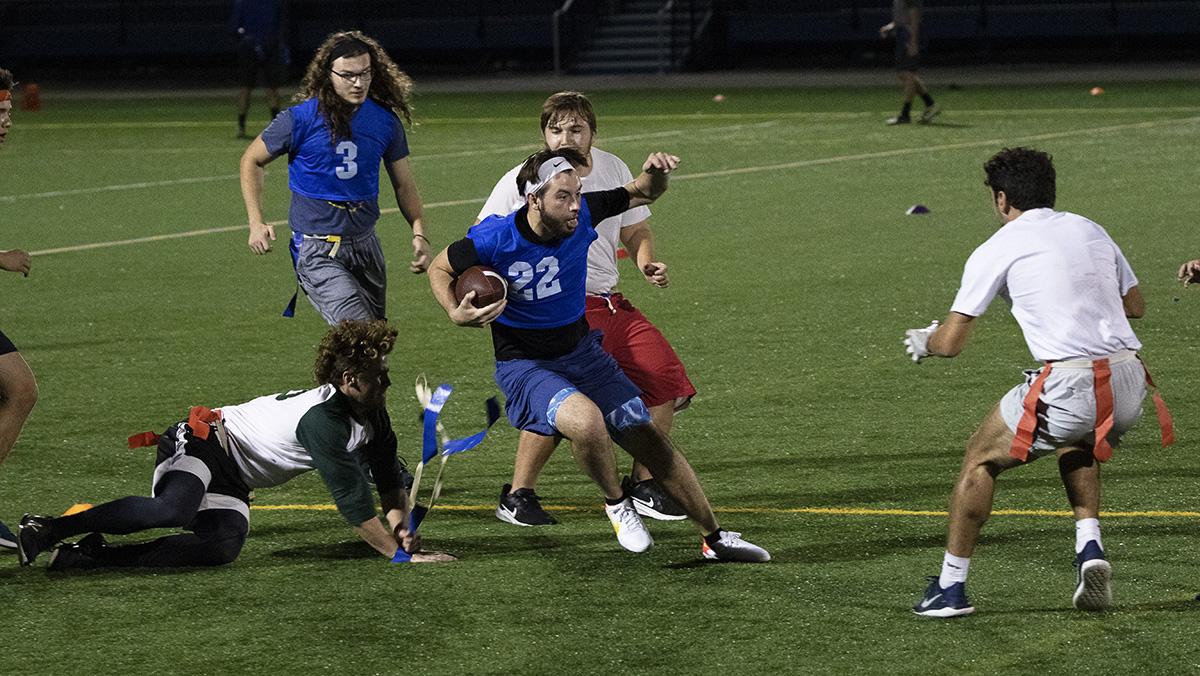 For the first time since Fall 2019, Yavits Extension and Higgins Stadium are echoing the sounds of cheering, whistles and friendly trash talking as intramural sports have returned to Ithaca College.

According to an email from Program Coordinator Lauren Hoffman, spectators are not permitted for flag football games, but are allowed for soccer matches.

Hoffman said she hoped to have a normal intramural schedule last academic year, but that was not the case.

“COVID-19 numbers also made us limit what we did,” Hoffman said. “It was a light year, which was kind of nice.”

Hoffman said compared to 2019, numbers in flag football are up. Hoffman said there are eight teams split into two leagues of four. Teams are approximately 10–15 members and they play games on Sunday nights with four 10-minute quarters.

“I’m happy that it’s kind of back to normal,” Rouse said. “I was getting sick of doing skill challenges. It’s been almost two years since we’ve done flag football or anything for that matter. I’m happy it’s back to normal.”

In Spring 2021, the intramural program ran skill challenges, like in-person dribbling and shooting basketball events. Hoffman said she wanted to offer more opportunities, but a low number of staff made her scrap those plans. Hoffman said the challenges last year brought in approximately 50 participants.

Sophomore Brian O’Donnell is participating in flag football this block. He said he and another friend did not have enough members at first to start a team, but following the first week, they joined a group of other players who also did not have teams.

“I joined the free agent team, and it’s just a bunch of people who don’t know each other, and now I feel like we’re friends,” O’Donnell said. “It’s a good way to make new friends, play some sports, get outside and be active.”

Freshman Cam Manna is another participant in this session of flag football. Manna does not play a varsity sport, so he said the thought of playing intramural sports for fun intrigued him.

“I was walking through the fitness center and saw something on the flag football intramural sign–up. I signed up through the flyer, there was a QR code, and I just joined a team on the website,” Manna said.

Hoffman said the numbers for outdoor soccer are lower compared to 2019. The league has six teams ranging from 8–15 players per team. In 2019, the program had eight teams. Even with that, she is still satisfied with the turnout for block one.

Junior Jacob Applebaum is one of the team captains for intramural soccer this year. Having experienced playing intramural sports at the college in 2019, he said this year’s experience is similar to what he was accustomed to in the past.

“The game feels the same, creating the teams is similar and inviting people to is all the same,” Applebaum said. “I haven’t noticed much of a difference.”

Applebaum said he reached out to several students to form his team’s roster, and now approximately 11 other students have joined.

“A lot of people on the team didn’t play soccer before this,” said Applebaum. “It was hard at first to get people to sign up. I put emphasis on that this is an activity with all of our friends, and it’s gonna be a fun time whether we win or lose.”

In compliance with the college’s COVID-19 guidelines, intramural sports are subject to the same protocols as other locations on campus. Hoffman said with the current session being outdoors, no masks are required and participants only have to show their green badge to participate. The college implemented a badge system, in which students are cleared to access campus based on if their daily health screening permits them to do so.

Rouse, who works in the fitness center, anticipates more challenges when intramurals move indoors to accommodate the changing weather.

“At the fitness center, there are always people complaining about wearing masks, saying they’re not able to breathe,” Rouse said. “There’s no doubt in my mind that people will come up to me and ask me if they don’t have to wear a mask or try and not wear one.”

Even with the lack of a mass testing system at the college to accurately track the number of positive COVID-19 tests, O’Donnell does not have any concerns with the current protocols.

“You’re outside, running around and having fun,” O’Donnell said. “It’s better than being piled on top of each other in the dining hall.”

“We have a year that’s kind of packed with fun and different things people can participate in,” she said, “It’s just making sure Ithaca College is doing well with COVID cases, and that will guide what we do for the rest of the year.”