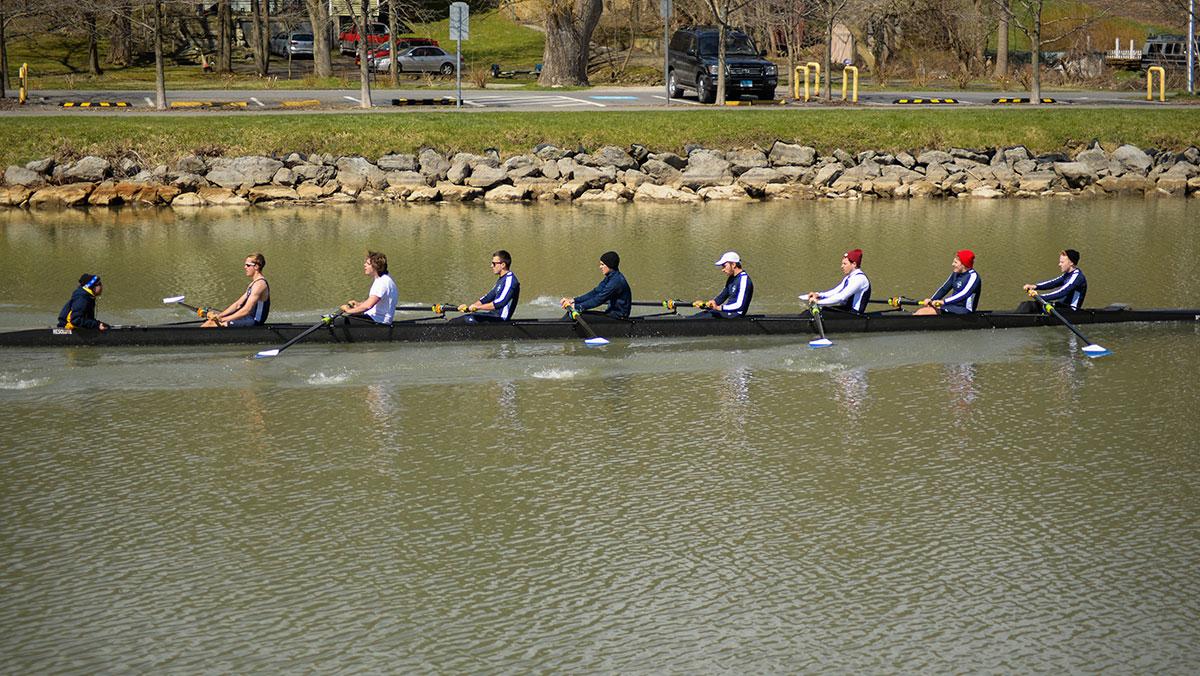 TOMMY BATTISTELLI/THE ITHACAN
Members of the men's crew compete against SUNY Geneseo on April 10 on the Cayuga Inlet. They had four first place finishes that day.
By Casey Koenig — Staff Writer
Published: April 11, 2016

The Ithaca College men’s and women’s crews rowed to victory two days in a row this weekend on the Cayuga Inlet.

On April 9, the winds were in between 10–15 miles per hour and the temperatures were bitter as they beat Smith College, St. Lawrence College and Skidmore College.

The Bombers also took first in the second varsity 8 race, 49 seconds ahead of second place Smith with a time of 7:49.7.

The women’s varsity 4 boat won in 7:16.9 and was crewed by sophomore Emily Campagna, junior Rachel Dowd, and seniors Brashears and Sara Muroski. Sophomore Monica Schaffstall was the coxswain.

On the men’s side, the Bombers placed first in two of four events and also had two second place finishes.

The men’s varsity 4 finished first with a time of 8:18.2. Juniors Johnston Tucker and John Posca and sophomores Alex Reed and Nick Cahill rowed while junior Sydney Eckstein was coxswain.

The women continued to dominate April 10 against SUNY Geneseo and St. John Fisher College, finishing first in all six races.

Within the next two varsity 8 heats, the Bombers continued to win, finishing in 7:38.22, 24 seconds ahead of second place, in the second heat.

The first novice 8 race that won was rowed by Garvin, Westfield, Roach, Sierra Keat, Campton, Otte-Cheney, Katie Hutton and Alisha Peralta and sophomore Heidi Mickunas with a time of 8:02.2. The second was crewed by Trombley, Brija, Mellinger, Datner, freshmen Rachel Smullen, Riley Simons, Meredyth Busam, Ella Sarachan and Greta O’Hara. They finished with a time of 7:38.19.

The men’s team had four first place finishes. The varsity 8 boat finished almost 22 seconds ahead of Geneseo with a time of 6:23.97. In the second heat, the Bombers won with a time of 6:37.08.

Both teams compete next at 8 a.m. April 16 in Worcester, Massachusetts, to take on Worcester Polytechnic Institute, Trinity College, University of New Hampshire and Colby College.