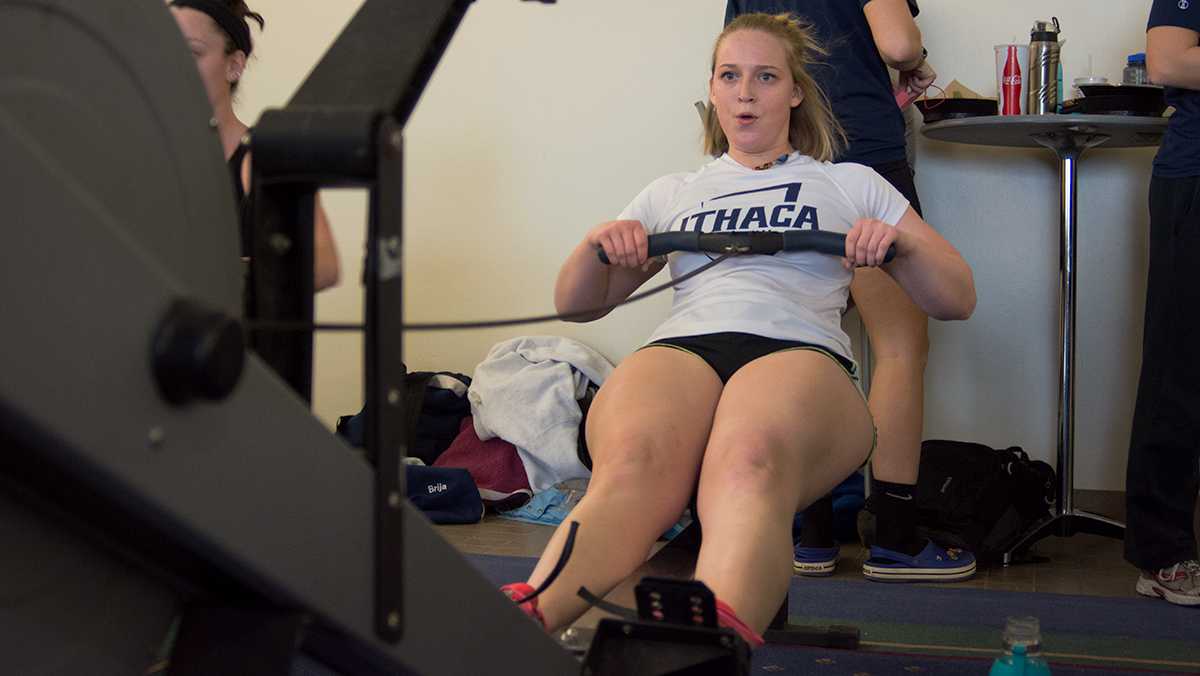 Members of the Ithaca College rowing teams traded in their oars and boats for stationary rowing machines to raise money for Habitat for Humanity on Feb. 3.

The teams hosted Row for Humanity for the 13th straight year in the Emerson Suites. Twenty-five percent of the money raised goes to support Habitat for Humanity, an organization that supports those in need by sending volunteers around the world to build affordable housing.

During the event, members of the rowing teams took turns rowing in 30-minute shifts throughout the day. Rowers raised as much money as they could leading up to the event and rowed for as many meters as they could during the 30-minute shifts. The rowing machines were set up in two rows of four machines facing each other so the rowers could push each other during their shifts.

Freshman rower Nicholas Tagg said it was a worthwhile event for everyone to participate in.

“It was such a great atmosphere,” Tagg said. “Everyone was working hard, and even though it was a lot of work, being surrounded by the energy was contagious. Also, knowing that we were rowing to help people with the money we raised was great.”

Last year, the team raised $20,000, with 25 percent going directly to Habitat for Humanity. The rest of the money goes to support the team during its spring season.

Becky Robinson, head coach of the women’s crew, said they have been raising money for this event since November, totaling $24,000 so far.

“It’s definitely a successful event,” she said. “We still have some donations rolling in.”

Members of the teams raised money by sending out fliers and encouraging family and friends to donate. Becky Robinson said the mailers are an important part of the fundraiser.

“The mailers let them share our relationship with Habitat for Humanity at Ithaca College and support us in a fundraising effort,” she said.

“I think we’ll fall a little short of $30,000, but still, if we raise $25,000, that’s a fabulous fundraiser,” he said. “We’ve got some good energy, and Habitat is participating, so hopefully they raise some money.”

Dan Robinson said people realize how important the cause is, which is why they support it by donating money.

“People respond,” he said. “They see that a student they knew in the past or still know is doing something, and they send in checks.”

Tagg said he was happy to be able to help a good organization like Habitat for Humanity.

“I think that people who are willing to volunteer and help their community on their own accord is very important,” he said. “We need to help those around us, in our community, and I think Habitat for Humanity does a great job of that.”

CORRECTION: The article previously misidentified the rower in the photo. The rower is now correctly identified as Melinda Keene.

Crew and sculling: A breakdown