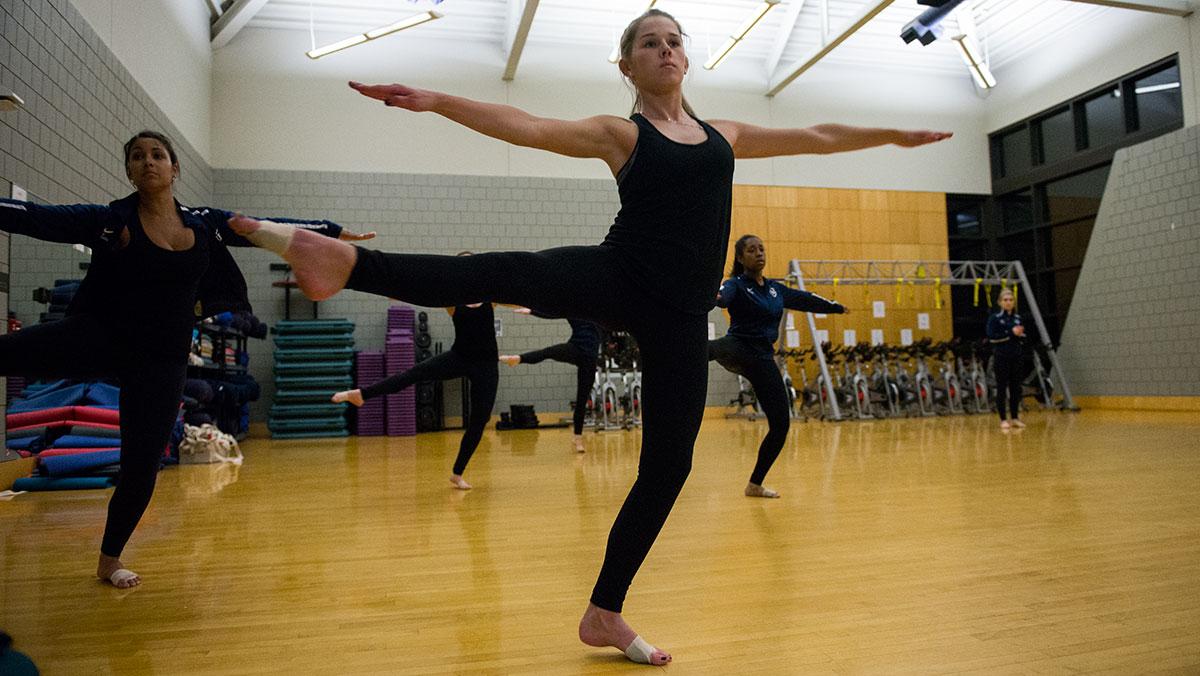 During the fall season, the Ithaca College Dance Team is seen entertaining the crowd during halftime at football and basketball games. Their turns are fast, their kicks are high, and their smiles are bright.

The team does more than dance at sporting events, however. During the second semester, the team’s focus switches to competition. It will be competing at the National Dance Alliance competition April 6–9 in Daytona Beach, Florida, for just the second time. They attended this competition two years ago and came in first in the jazz category and finished eighth overall.

The team does not have a coach and instead relies on senior captain Melissa Miranda and junior captain Becca Aronoff to lead the team. There is a total of 13 women on the dance team, and they hold tryouts every fall. This year, it had 22 women try out for the team at the beginning of the school year and selected three.

Junior Isis Morgan said all of the women on the team have some sort of prior dance experience.

Aronoff said there is a different mindset when it comes to performing during the halftime of games versus a competition.

“Football games and basketball games are definitely more fun than this because now we have to focus more on our technique,” Aronoff said.

In the past, the team has gone to the Universal Dance Association National Championships, a competition for dance and cheerleading that was held in January. Miranda said that did not give them much time to get ready after winding down from the football and basketball seasons.

“NDA works better because because it’s later in the year and we have more time to prepare,” Miranda said.

To qualify, the team sent in a video to the NDA of it performing. The team found out that it had qualified in November.

The team will be performing a Lyrical Contemporary dance to the song “All I Want” by Ahn Trio. Ordinarily, the 13-woman group rehearses for two hours on Sunday, Monday and Wednesday, but Aronoff said it is putting in extra practice now for the competition.

Shortly after the dancers found out they had made Nationals, they hired a local studio owner to choreograph the routine. Morgan said learning the routine was long and strenuous.

“Each practice was three hours, blood, sweat and tears,” Morgan said. “It took three days because we had to do the ending.”

From there, the team has spent countless hours breaking the dance down into sections and cleaning it. Taylor Van Meter, a sophomore who will be the team’s junior captain next year, watched the group do a run-through of the dance and gave critiques.

Aronoff said there is an emphasis on each part of the routine, whether it is syncing turns, timing or the overall cleanliness of the dance. Since the group does not have a coach, Aronoff said, the women rely on each other to fix mistakes and to point out strong points and what needs to be worked on.

Aronoff said that despite the hard work and intense practices, the team has remained positive throughout the process and is ready.

“We’re hoping that all of our hard work pays off,” Aronoff said. “We’re super excited. This couldn’t have been made possible without the sports club council because they’ve been supporting us a lot.”