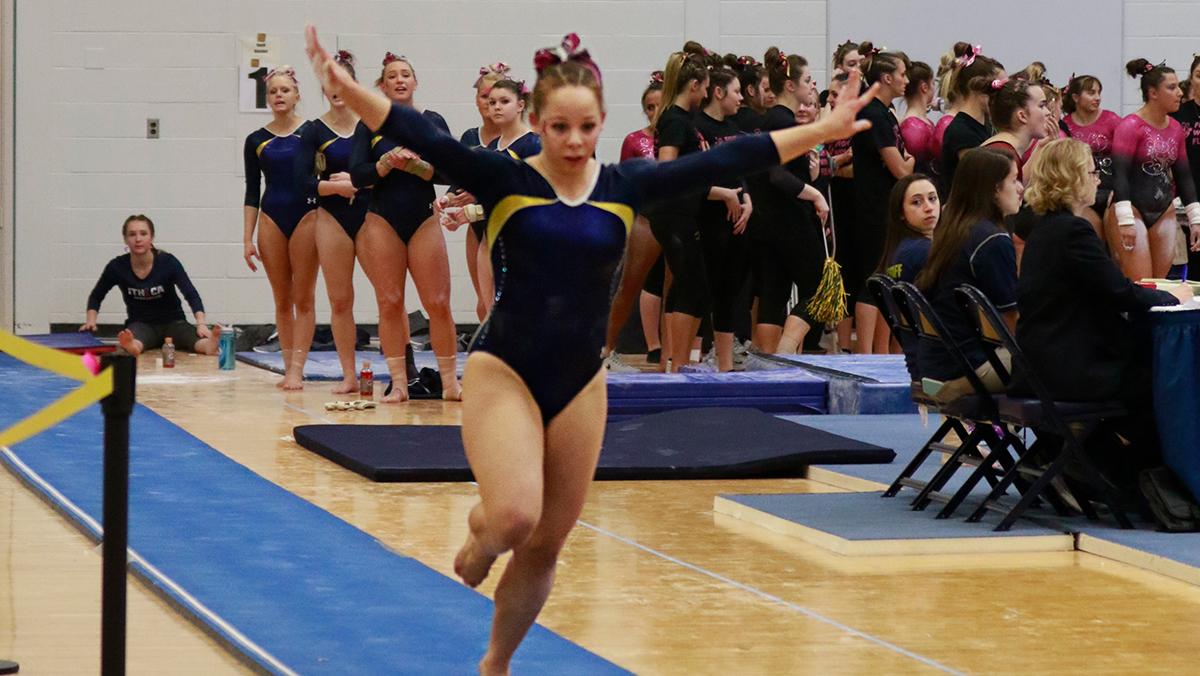 CASEY KOENIG/THE ITHACAN
Sophomore Carolyn Nichols competes Feb. 26 in Ben Light Gymnasium. She debuted a vault that had never been preformed in Division III before. The team set a program record on vault Feb. 11 with a score of 47.850.
By Casey Koenig — Staff Writer
Published: March 7, 2017

Straight ahead, there is a long, narrow runway. Sophomore Carolyn Nichols stands behind it, preparing to sprint down and push off the springboard, then hit the vault with her hands and flip through the air several times before sticking the landing. She goes through her prevault routine, where she physically gets herself pumped up and clears her mind of all thoughts, and then she is ready to go, blacking everything out of her mind and doing what she knows how to do best.

Nichols debuted a new vault in competition Feb. 26 that had yet to be performed in Division III gymnastics.

She said head coach Rick Suddaby gave it to her to try last season and that she learned it in a couple of months.

The vault is one of four events in women’s gymnastics, along with the uneven bars, balance beam and floor routine. For the Ithaca College women’s gymnastics team, the vault is a major strength that often sets the team apart from the competition. In a dual meet format, six gymnasts compete on each event. Though not all of the same gymnasts compete every week, the overall team score on vaulting has improved throughout the season. In its first meet of the season, Jan. 15, against Rhode Island College, it scored a 46.050. Less than a month later, on Feb. 11, the team set a new program record in vaulting with a score of 47.850 against Cornell University.

Gymnastics routines are scored out of a 10.0. After each routine, judges go through and score it. They deduct points for multiple reasons, such as taking a step on a landing, having imperfections in body form and falling off the equipment. Deductions range from a tenth to five–tenths of a point.

To prepare to compete in vaulting, the team goes through a series of routines in practice every day. These routines include timers, which is when the gymnasts work on their technique by performing the vault and then landing on their back on a giant mat. They also practice their landings by focusing on the end of the vault and doing drills on the side.

It takes gymnasts several months, or even up to a year, of preparing a new vault before they can compete with it. Some gymnasts perform the same vaults for years.

Sophomore Victoria Gery said she intends to learn a new vault during the offseason that will be ready for competition next year. She has been competing with the same vault this season as she did last season and said she has seen an improvement of about three-tenths of a point — a huge margin in gymnastics.

“I’ve taken ownership of my vault,” Gery said. “I feel like I actually know how to do it this year. I know how to make it work the way it’s supposed to.”

Nichols said practicing a different vault has helped her other vaults.

“It fixed a lot of my other technique issues,” she said. “It’s a lot cleaner now.”

Freshman Baylie Trammell said the most common vaults competed on the team are the Yurchenko, which is a roundoff onto the springboard into a back handspring with a full twist onto the table, and then a flip off the table with a twist; and Tsuk, which is a jump off the board and push off the hands into one or more backflips. She said it is the little things that help a gymnast stand out from the rest of the competition, like having good height.

“You want your vault to be powerful,” Trammell said. “It doesn’t matter if you can do the vault. What’s important is does it look good.”

Trammell has been competing using the same vault for five years and, like Gery, is looking forward to learning a new one during the offseason. She said that before she vaults, she gives herself a pep talk to calm her nerves.

“I tell myself, ‘I know I can do this. Don’t worry about this. Do what you do in practice,’” Trammell said. “I have my mental cues, like run fast, block hard.”

Gery has a similar mindset. She said she gives herself reminders and tells herself that she knows what to do.
“Before I go up, I say, ‘Trust yourself; you got it,’” Gery said. “‘You can do it. It’s just like practice.’”