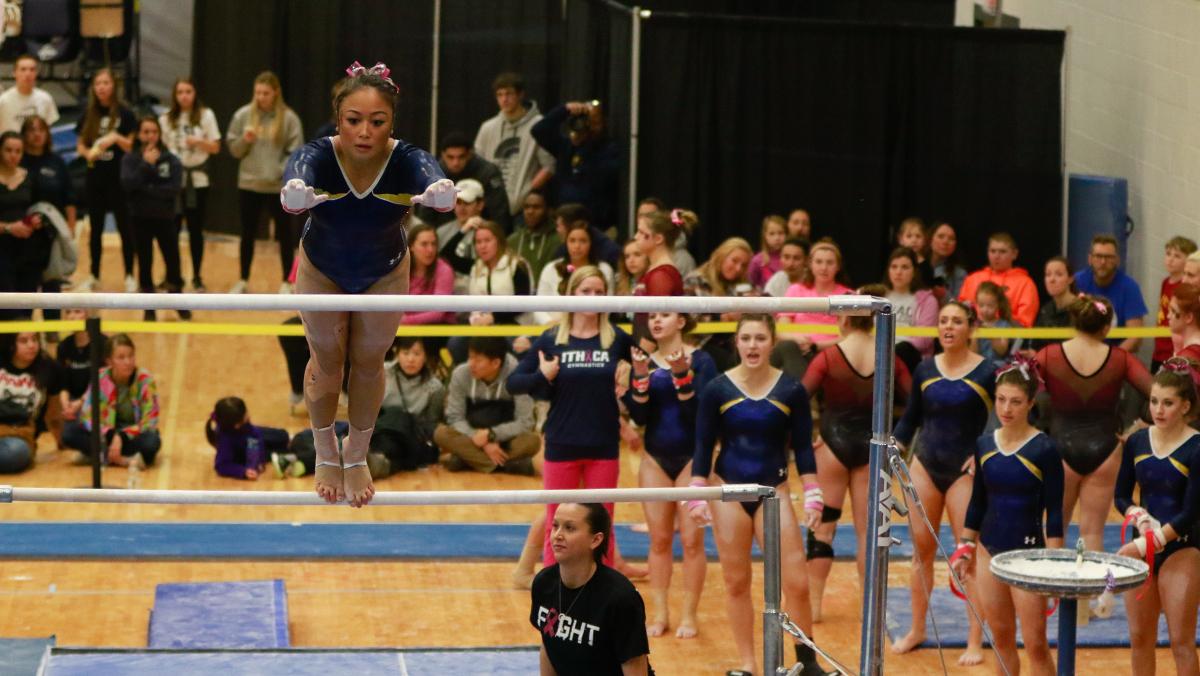 After achieving her dream of making it to the national competition, she had a reaction to her contacts right before her beam routine and had to compete without them. Her teammates stood on the edge of the beam so she could see where to flip.

Despite the hindrance, she scored 9.1 and finished in a tie for 16th. This season, Balcerak is excelling on bars, beam and floor for the Bombers and is the only member of the team competing in three events.

Head coach Rick Suddaby said she is setting an example for the rest of the team.

“She’s competing in more events than most, so she sets a really good standard,” Suddaby said.

Since peeking into her older sister’s gymnastic class over 15 years ago, Balcerak has been hooked on the sport.

“I always had so much energy as a child, so it was like a perfect release of energy for me,” Balcerak said.

During her years at the Rochester Gymnastics Academy, Balcerak earned numerous accolades as a budding gymnast. She was a club gymnast in the USA Gymnastics system for nine years and also won state, regional and national competitions at levels nine and 10, the highest in gymnastics before the elite level.

Balcerak said competing at an intense level while growing up prepared her to balance academics and athletics with ease.

“Ever since I was in USAG, I’ve learned to be really efficient when it comes to doing my homework,” she said. “It really hasn’t changed since coming to college — it’s just increased.”

Coming to Ithaca College felt natural for her, she said. However, her journey to where she wound up was a tough one, especially on her body. During her senior year of high school, Balcerak suffered a stretched ligament and a broken talus bone at the regional competition, which Suddaby attended to watch her. Even with these injuries, she said, she competed anyway. Balcerak was able to make it to nationals that year but was not able to attend due to the severity of her injuries.

The biggest difference in collegiate gymnastics, Balcerak said, is the level of independence she has as an athlete. She has more control of her practices and looks to Suddaby for guidance rather than the stern drilling she was used to from USAG.

“College gymnastics is much more independent, which is how you grow as a gymnast, as a team member and a leader,” Balcerak said. “There’s a lot more leadership in college gymnastics.”

During the regional competition last year, the meet that would determine whether she went to nationals, Balcerak was on the cusp of making it, though she didn’t know it, and her coach did not want to tell her for fear of psyching her out. Balcerak scored a 9.6 and placed 12th on the beam to qualify for nationals.

“It was like another meet to me; I was very surprised I even made it to nationals,” she said. “It was really a last–minute thing.”

This season, Balcerak will be competing on bars, beam and floor, a bit of a change from last season, where she was competing just on bars and beam. Balcerak is currently having one of her best seasons, having set a new personal record on the balance beam with a score of 9.775 on Feb. 15 against SUNY Cortland. She tied for first place and helped the team set a new school record on the balance beam.

Junior Kelly Nash said one of the main focuses on the team this year is on individual skills, something Balcerak does a good job of during practice.

“She works really hard and gets everything done but also is able to make it fun,” Nash said. “We’re really trying to focus on our energy and attitude in the gym, which is really important for our success.”

With only two years left on the team, Balcerak said she has big goals for the rest of her tenure.

“I want to make it to nationals as a team, have no regrets and enjoy one of the best experiences of my life,” she said.