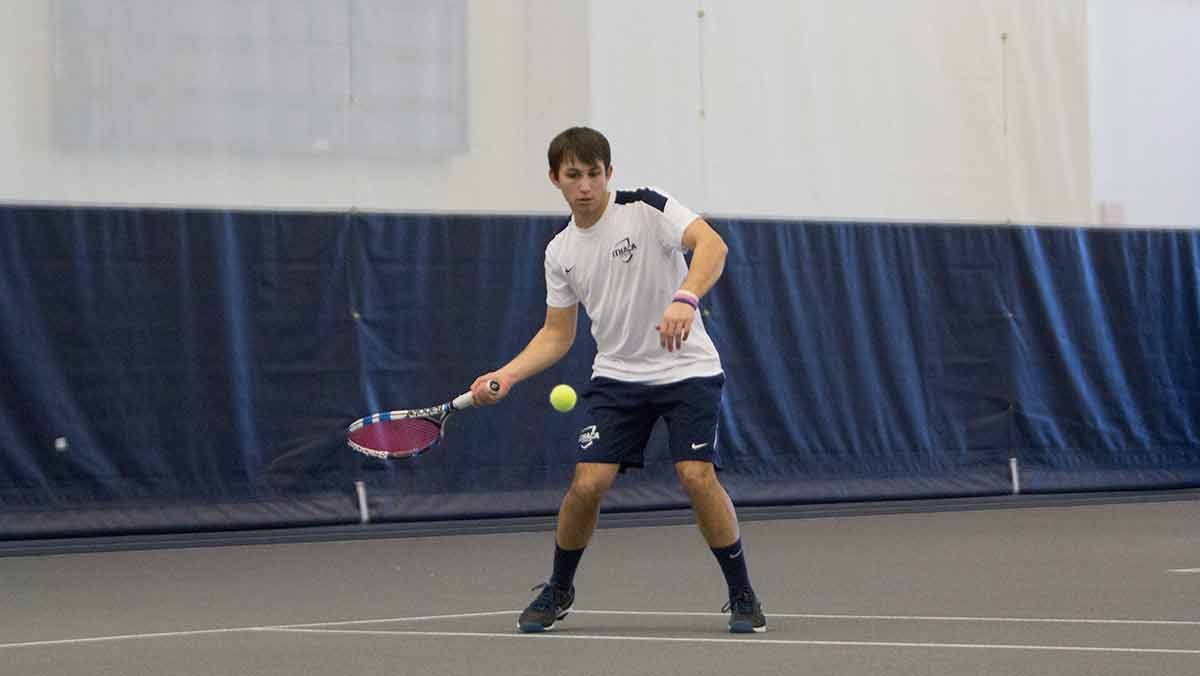 CAITIE IHRIG/THE ITHACAN
Senior Chris Hayes plays in his tennis match Feb. 14 against the University of Rochester in Ben Glazer Arena. Hayes is the only senior on the men's tennis team.
By Danielle Schear — Contributing Writer
Published: February 24, 2016

With 10 minutes to go before the Bombers’ opening match Feb.14 against the University of Rochester, senior Chris Hayes is leading his team in its pre-game cheer and blasting music from the speakers, doing everything he can to get his team excited. As the only senior on the team, Hayes takes it upon himself to get his teammates pumped up in order to beat their rival for the first time in six years.

On and off the court, junior Nate Wolf said, Hayes is a constant source of motivation.

“One thing he does really well is that during matches he gets us all really pumped. He vocally supports a lot, and he also gets us really excited before the match,” Wolf said.

Hayes said he first picked up a racket when he was just 5 years old and began playing tournaments by 11. During his years of private coaching with Billy Nealon at the Tennis Club of Rochester, Hayes said, he got to compete with some of the best tennis players in the Rochester area, which made him a much better player.

His father played Division I tennis for Carson-Newman University. His uncle Eric Hayes is the head coach at Mercer University, a Division I school, and his 80-year-old grandfather can still be found on the tennis courts.

“My dad was the first person who introduced me to tennis, which gave us a really special connection,” Hayes said.

Last season, Hayes was named Empire 8 Player of the Week. He was also awarded first-team honors as a singles and doubles players and had a combined record of 15–1.

Hayes said one of his goals is to keep the team motivated throughout the long season. For his last season with The Bombers, he wants to beat Hobart College, The College of New Jersey, Connecticut College and Stevens Institute of Technology because during his three years here, the Bombers have been unable to beat those teams. He said part of the problem was the team wasn’t necessarily as focused as it should have been.

As a junior last season, he was the only upperclassman. This year as a senior, Hayes said it is helpful that he has many juniors to help him out.

When sophomore Lorenzo Viguie-Ramos transferred from Chestnut Hill College last spring, he said it was a huge change for him but that Hayes was there to take him under his wing.

“Chris, being the oldest person on the team, really helped me get acquainted with the team, the campus and helped me increase my level of play,” Viguie-Ramos said.

Last semester, juniors and second-year captains Wes Davis and Wolf studied abroad, leaving Hayes to organize captains’ practice with minimal help. With Davis and Wolf out of the country, Hayes said he had more pressure on him to keep the team organized.

“Now that Wes and Nate are back, it’s been a more stable environment,” Hayes said. “It was definitely a little chaotic last semester with the captains’ practice, but now Nate and Wes are back with their great personalities.”

Head coach Bill Austin said Hayes is the kind of captain who practices what he preaches.

Viguie-Ramos said Hayes takes on more responsibilities than what is asked of a captain by assisting the coaching staff in numerous areas, including uniform orders, organizing practices and dealing with recruitment.

“The whole team — I mean, I know we don’t say it often, but we really appreciate everything he’s done for us both on and off the court,” Viguie-Ramos said. “He is a different type of leader. He doesn’t tell us, ‘do this, do that.’ He treats us like part of his family. That’s what I think makes him a better captain than others. He plays more of a family role rather than a coach’s or captain’s role, and that’s why we all look up to him.”

“The guidance they have given me the past two years has been huge. Bill has almost been a father figure to me while I’ve been here,” Hayes said. “He’s helped me through some tough situations, and Jordon and Rich have really expanded my game and gave me good advice.”

Austin said Hayes’ work ethic makes him hard to beat on the court, as he dedicates at least 30 hours a week to tennis, while the average team member puts in around 12.

“He doesn’t have a go-to weapon. His weapon on the court is about being relentless, like a dog and a bone,” Austin said. “If you want to beat him, you ultimately need to be patient, which makes it very difficult.”

Hayes said he strives to create a family atmosphere for the team and put it before himself.

“This team is a group of brothers. We are always looking out for each other, and that’s what makes us better,” Hayes said.