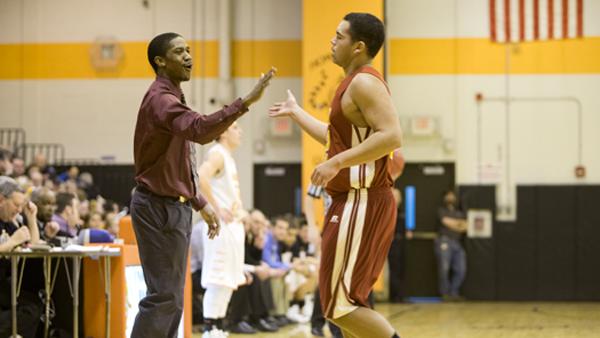 Every day, the Ithaca Little Red boy’s varsity team groups together and shouts this chant with a disciplined excitement inside the hardwood confines of the Ithaca High School gymnasium. After the huddle breaks, every member of the team gets his own basketball and lines up on the baseline — a painted marker on an oak floor, gleaming from a fresh wax coating, that is in ideal shape for the two hours of thumping about to take place.

“On the whistle!” the whole team replies in unison, as if they are a group of young Navy SEALs responding to a command from a ranking officer.

Not a single person moves.

Zulu shouts, “Go!” again, this time followed by a distinct whistle. The whole team pounds their balls against the hardwood as they run hard from one baseline to the other and back, panting from the 168-foot sprint.

Standing firmly on the sideline, the tall, lean Zulu is dressed in a black T-shirt with a colorful outline of Africa printed on it, grey sweatpants and Nike basketball shoes. The orange lanyard hanging off of his neck is linked to the whistle still perched at the tip of his lips.

He cracks a small grin and addresses his team.

Don’t be surprised if you see those last four words on shirts all around the Ithaca area. It is the mantra the Ithaca High School boy’s basketball team is chanting this season — a motto that has been instilled in them by Jobe Zulu, the team’s first-year head coach.
Zulu, a graduate of Ithaca High School himself, said his primary goal this season is to change what it means to be a basketball player for Ithaca High School. Ten years after he himself donned the crimson jersey, he is on the sideline channeling the dedication and fervor that once made him a standout athlete into molding not only great players but also great people.

The fiery young coach has inherited a program that for the last couple of years has produced few wins and even fewer scholars. Last season for the Little Red was marred on the court by offensive issues, among others. Performance issues often accompany off-court problems. From multiple accounts, players were viewed as thugs, struggling to pass classes, graduate and ultimately failing to matriculate to the college ranks.

“[The students] have a consistency of not graduating on time, a tendency of kids getting kicked out, missing multiple games for behavior and academic reasons, especially when it comes to some of our young black males,” Zulu said.

Growing up, Zulu said, his father was a Vietnam veteran who dealt with mental issues, drug abuse and alcoholism that eventually lead to domestic violence. His family life was so unstable that by the age of 12, he was living with a friend, and by 16 he was financially supporting himself while still working hard to become a starting guard for the Little Red.

Despite the negative experiences in his life, Zulu understood the importance of an education from a very early age, thanks to lessons from his mother growing up.

“When I was in Kindergarten, first day of school, I got on the school bus and was the only kid, let alone a kindergartner, who had a  three-piece suit on,” Zulu said. “That’s how important school was to my mother; she really pushed me and told me I could do what I wanted. I was a typical kid. I wanted to become president of the United States, but in that I understood that college was the way, and academics were definitely going to make a difference.”

Zulu himself would take a year off of school working as a dishwasher at a local restaurant and then as a day laborer receiving $6 an hour from 5 a.m. to 5 p.m. to pay for college. After earning degrees from Cayuga Community College and Cazenovia, Zulu made his way back to Ithaca to coach the Little Red.

When he came back to coach, Zulu wanted to show his players how important the classroom is. Ithaca High School’s Athletic and Wellness officer Danielle LaRoche said he has begun by changing the standards needed to play for the Little Red basketball team.
“In the past if you have an F or two, you could still participate in athletics. [Zulu] has said ‘No!’” LaRoche said. “If you are failing a class, you can’t play. You have to sit. You can still come to practice, you can still participate with the team, but you are not going to play until you get your grades up.”

Assistant Coach Shane Taylor said Zulu is teaching these kids what it means to be accountable and dedicated, both on and off the court. It is these life lessons that guide Zulu in his work today.

“He stresses that hard work will pay off successfully, not only on the court but in the classroom,” Taylor said. “He stated during his parent meeting, whether we go 0-18 or not, if every single one of his student athletes graduates high school on time, he’s done his job.”

This season, the team is working to deconstruct the negative image that they’ve had both in the school and in the community, and the players are responding. Some players that may not have considered college a part of their future are reconsidering because of Zulu.

“He’s making sure we’re actually thinking about college, making sure we go to college and helping us get there,” power forward and captain DaVondre LaFave said. “He said he’d help me get into Cayuga Community College, get my grades up there while playing basketball, then after two years transfer to a good four-year institution and get my degree.”

The Little Red players are confident that if they work hard and focus in the classroom, they can achieve anything they set their minds on. Zulu urges them to follow their dreams and be the people they want to be, despite any obstacles.

“When it comes to telling these kids to believe, to fight, to have pride — there’s no show,” Zulu said.  “I feel it, I bleed it, and I’m getting them to understand that you should have some pride in where you come from and what you have to offer.”