J.J. Antoine hired as the facility, event and team specialist 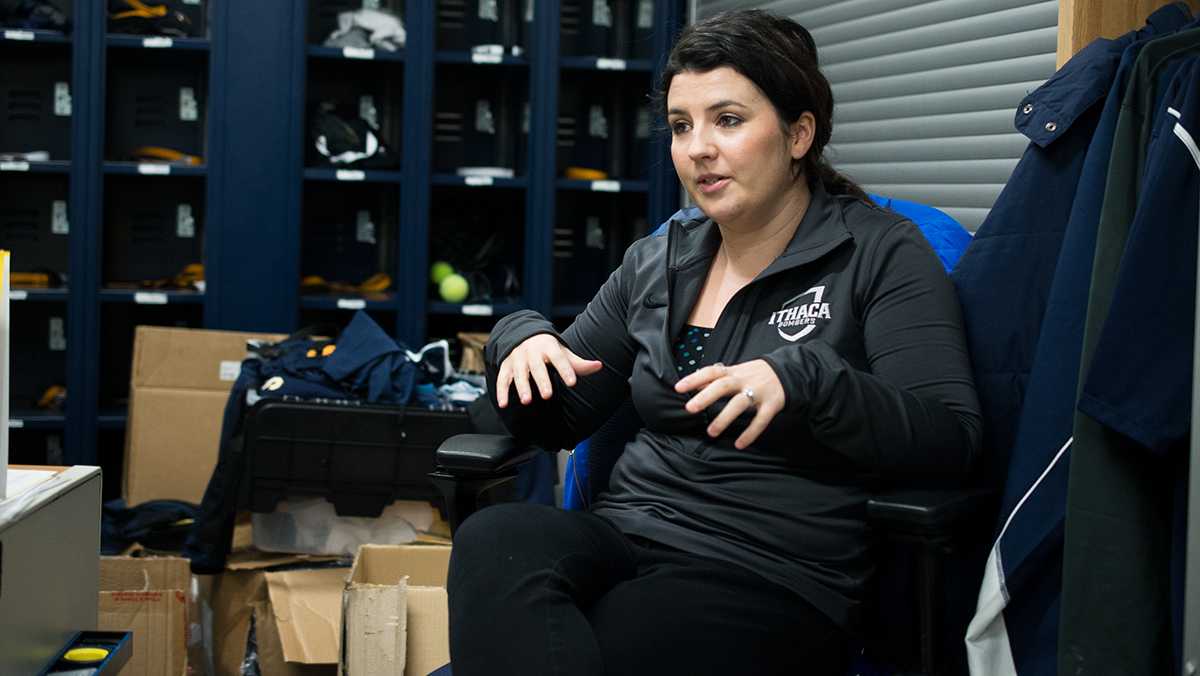 SAM FULLER/ THE ITHACAN
J.J. Antoine speaks with Sports Editor Andrew Sullivan in her office at the Athletics and Events Center on Jan. 19. She was hired on Jan. 8 to replace Andy Davenport, who held the position since fall of 2013.
By Andrew Sullivan — Sports Editor
Published: January 22, 2016

Earlier this month, J.J. Antoine was hired by Ithaca College as the facility, event and team travel specialist. She replaced Andy Davenport, who held the position since fall of 2013.

Antoine’s duties include equipment services for the varsity teams based out of the Athletics & Events Center, event management for home meets and matches inside the A&E Center and on the Wheeler Tennis Courts, and coordination of team transportation and travel arrangements.

Sports Editor Andrew Sullivan spoke with Antoine about her interest in the position, her past involvement in athletic administration and her plans for working at the college.

Andrew Sullivan: What was so attractive about this job?

J.J. Antoine: Being a Division III student-athlete at Mount Holyoke and going through my collegiate career as working in both high academics and high athletics, I really wanted to get back to a campus that held the same kind of ideals. Ithaca has a long-standing tradition of being both of those things, and so when I started my job search and saw this one, I knew that was a place that I really wanted to be a part of — to be a part of the climate here and a part of interacting with student-athletes, and really kind of pushing them into the next spots of their careers.

A.S.: What were your prior experiences in the field of athletic administration?

J.J.A.: I played soccer at Mount Holyoke College for four years. I worked in their athletic department while I was there and did a little bit of supervisory-type things as a student there. After that, I kind of realized my junior and senior year that I wanted to go into athletics. I was able to get a job at the Eastern College Athletic Conference and really got a taste for the administration side of sports. I realized that I really wanted to stay in college athletics, and I should probably have a degree that has something to do with that. So I looked to go back to graduate school, and that led me to Springfield College in Massachusetts for their athletic and administration program. So I did my two years there, doing a lot of the event management pieces. From there, I took a little bit of a turn and ended up in Kansas City at an organization called NACWAA, which is the National Association of Collegiate Women’s Athletics and Administrators. They work with advocating and promoting women athletics, particularly through leadership building. … It really honed in that I want to be back on a campus.

A.S.: How did those past work experiences help you prepare for this position?

J.J.A.: I think that they have all made me able to be flexible. I think that this position in and of itself is huge in the fact that you are really not at this desk very often. You are in all kinds of different places with multitudes of different people. … All those experiences kind of helped with this job in particular and also being able to work with a bunch of different personalities. I think that’s the biggest part of athletic departments: You have coaches, student-athletes and administration, all [of whom] have different goals.

A.S.: What ideas do you have to improve some of the responsibilities of the position?

J.J.A.: The biggest thing right now is talking to the coaches and figuring out their ideas and what they really want. There’s always a strong balance between the money that you are able to have, where you put it and kind of prioritizing all of that … and going through some of the older pieces that might be in here and figuring out what we can get rid of. So just keeping up with the efficiency, and it’s a lot of learning this room and learning what’s in it.

J.J.A.: I really want to be a resource for them. I think what was critical for me as an undergrad was having professional staff of the athletic department [that was] able to see something in me that might have been, “She can take on more. She can do more.” I really want to be able to be there, and if I see that for someone, be able to offer them that next leadership step or help them with their captainship. I only graduated from undergrad five years ago, so I know a lot of things that they are forced to deal with are things that I’ve done, too. So just being kind of a sounding form that might not be the coaching staff would be something that I would like to be involved with them.