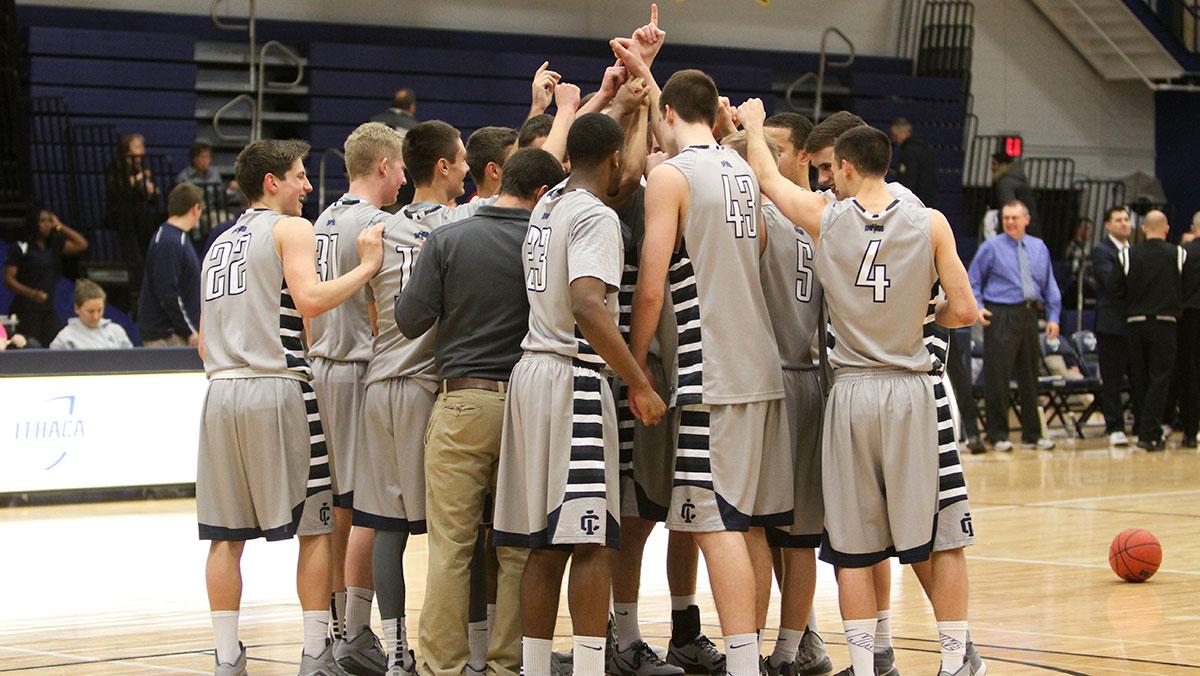 Kaitlyn Kelly/The Ithacan
The men's basketball team huddles together before a Jan. 26, 2015 matchup against Alfred at Ben Light Gymnasium. Alfred defeated the college 84–81 on Jan. 9, 2016 at the James A. McLane Physical Education Center.
By Alex Wong — Staff Writer
Published: January 10, 2016

After almost a month-long break, the men’s basketball team returned to action Jan. 3 to begin Empire 8 Conference play. Looking to improve on its 6–2 record in the new year, the squad got started with a bang.

Stevens Institute of Technology paid a visit to the South Hill and the two teams showed they may have been storing all their offense over the holidays as they battled to a 120–110 final in favor of Ithaca. The 120 points is the most scored by the Bombers since Feb. 14, 2015 when they matched the total in a double-overtime loss to the Ducks, 125–120.

Sophomore guard Joey Flanagan led the way for the Bombers, putting up a career-high 39 points in the win. Flanagan made 17 shots from the field on 21 attempts, including a perfect 4–4 from 3-point range.

Freshman guard Jake Mitchell provided a spark off the bench as well, totaling 23 points in 20 minutes on the floor, good for second-highest scorer on the team that day. Mitchell had seen time in five games earlier in the season, but had amassed just two points, with those coming in an 89–59 win over Wells College back on Dec. 8, 2015.

Senior forward Alex Lorenz was the high-point man for the Ducks with 25 points, while freshman forward Ryan Coffey chipped in 19. Sophomore guard Chris Cosgrove and senior guard Kevin Zychowski each added 17 points of their own as well.

The Blue and Gold saw their 120-point outburst cut in half on Jan. 5 in a 95–60 loss to Nazareth College as the Bombers shot a woeful 34 percent from the field, missing 40 shots on the day. The 60 points scored was the lowest total the Bombers had been held to all season.

The Golden Flyers were paced offensively by senior forward Mitch Ford, who contributed 28 points and 14 rebounds. Ford has been key for Nazareth all season, leading the Empire 8 in scoring by averaging 25.6 points through 11 games in his senior campaign.

Three days later, the South Hill squad got back to its winning ways, squeaking out a five-point win over Houghton College on Jan. 8, 98–93.

Ezema posted a second straight double-double with 17 points and 15 rebounds, while Flanagan and sophomore guard Marc Chasin each netted over 20 points, scoring 24 and 29, respectively. Chasin scored 25 of his 29 points in the second half to lead the team in a back-and-forth game.

Senior guard Brandon Camacho led the Highlander’s offensive efforts with 20 points including a 50 percent-clip from 3-point territory, converting three of his six attempts from beyond the arc. Camacho was aided by junior forward Johnathan Stowe’s 14 points, as the Toronto, Canada, native provided a strong inside presence for Houghton throughout the game.

It was a quick turnaround for the team Bombers, as the squad hit the hardwood Jan. 9 for a second straight road game, this time visiting Alfred University. It proved to be a tough matchup that went down to the wire, but in the end the Bombers dropped their fourth contest of the year 84–81.

The Saxons prevailed behind a tremendous individual effort from junior guard Tyler Seelman. Seelman rained in eight 3-pointers on his way to a 34-point afternoon.

After a strong start to 2016, the Bombers record now stands at 8–4 overall, including 2-2 in conference play, putting them fifth in the Empire 8 standings.

The squad will look to avenge its loss from Alfred on Jan. 12 when they host the 2–10 Elmira College Soaring Eagles at Ben Light Gymnasium for a 6 p.m. tip-off.