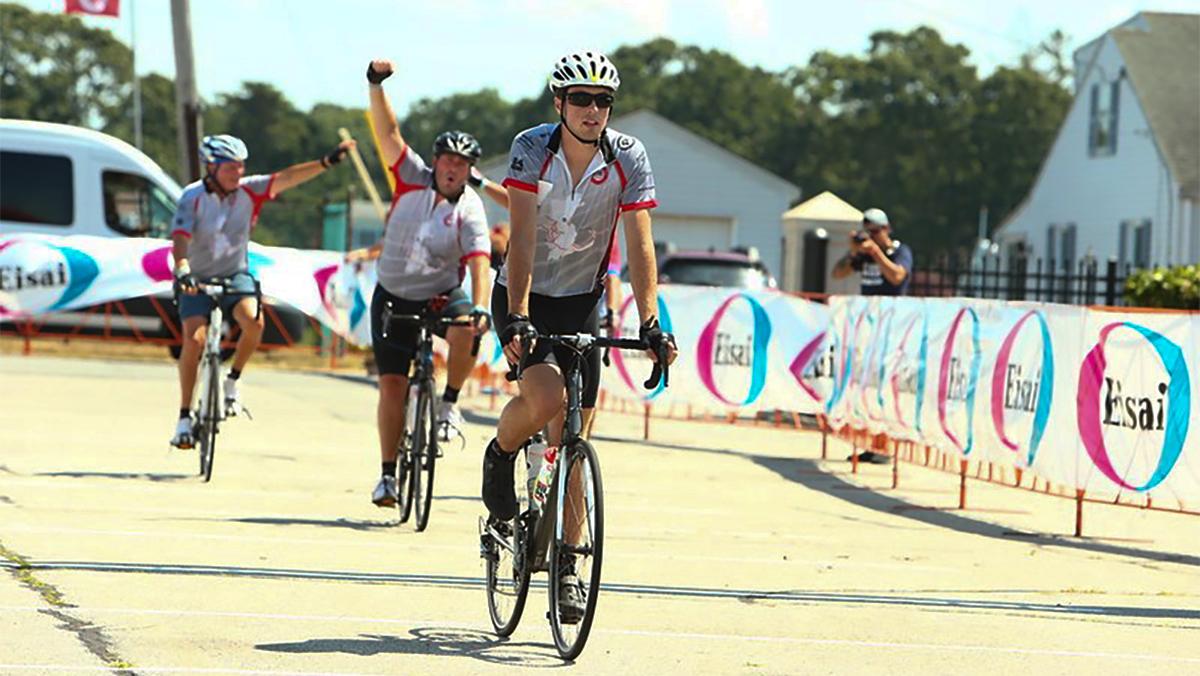 On Aug. 6 and 7, more than 6,000 people strapped their feet to their bikes and rode in the 2022 Pan-Mass Challenge (PMC) to benefit the Dana-Farber Cancer Institute.

According to its website, the Massachusetts-based bike-a-thon event is one of the biggest athletic fundraising events in the country. Hosting its first event in 1980, it has raised over $831 million for the Dana-Farber Cancer Institute to date. Founded by Sidney Farber in 1947, it started out as a cancer research center for children. In 1969, it expanded to patients of all ages and became known as the Sidney Farber Cancer Center. In 1983, the center acknowledged the support of Charles A. Dana and incorporated his name to create the Dana-Farber Cancer Institute.

One of the 6,000 riders in this year’s challenge was Ithaca College junior Andrew Geschickter, who plays for the college’s men’s basketball team. Geschickter, along with his father, rode a 112-mile portion of the race. Riders have the choice of 16 routes to ride, spanning from 25 miles all the way to 211 miles. The route he rode started in Sturbridge, Massachusetts, and ended in Bourne, Massachusetts. Riders also have the option of riding for either one or both days of the race. When graduate student George Sikoryak, Geschickter’s teammate on the basketball team, heard he was taking part in this race, Sikoryak said he chuckled.

“I rode 30 miles once and was struggling,” Sikoryak said. “When he told me he was riding 112 miles, I thought he was joking. That’s just an insane number.”

While it is his second year riding in the race, Geschickter said he has been a part of this race for seven years as a volunteer. During his younger years, Geschickter and his brothers would hand out water to riders and clean up trash left along the route.

“At that age, I understood that they were doing something good and that they’re raising money to fight cancer,” Geschickter said. “But like, at that young of an age, you don’t really understand what that means yet.”

The event has been a staple for Massachusetts and requires a great deal of coordination to ensure its success.

“Riding with other people and sharing conversations on the road, I’m starting to realize now how many different people and groups have to come together to make this event work,” Geschickter said. “Every town’s police department has to be on board. It’s just awesome watching people come together for this awesome cause.”

Geschickter said that after the event is over and it is time to tear the set up down, prisoners from the local jail come and help with the cleanup. He said without their help, the process of cleaning everything up would take even longer.

Geschickter said he was born into cycling. When he was younger, he said that he would watch the Tour de France with his father and that is how his love for cycling developed.

“I still bring my bike to campus, I still like to go on rides, and it’s just like, right now, it’s a great way for me to just like do something active, but that’s different than basketball,” Geschickter said.

As he got older, Geschickter said that he grew even closer to the organization. His mother started to work for the PMC and has worked her way up to be the current chief financial officer of the organization. Through this, he got an even more in-depth look at how this massive event is set up and gained even more appreciation for it.

“I was always close to the organization and would go then when she started working there,” Geschickter said. “I’d be in the warehouse, like helping, you know, volunteer during the week leading up to it.”

The charity in which the ride is for, Dana-Farber, has also played a big part in the Geschickter family. Andrew Geschickter’s grandmother underwent a battle with cancer when his father was younger.

“They saved her life and [she] had 25 bonus years,” Chet Geschickter, Andrew’s father, said. “She was able to be a grandmother to Andrew and his brothers. It’s not an understatement to say I owe my mother’s life and that time with her to Dana–Farber, so it’s a deep personal cause.”

When Andrew Geschickter decided to ride this year, he rode in honor of his friend Mark Barrett’s late mother, Susan Barrett, who passed away after a battle with cancer in 2020. Andrew Geschickter has played basketball with Barrett since they were in middle school, and while their playing careers have taken them in different directions, they have remained friends.

When he approached Barrett, Andrew Geschickter said he wanted to make sure Barrett was comfortable with him riding in honor of his late mother and not lead to him reliving the events of his mother’s battle with cancer.

“It is a lot having your mom’s battle with cancer brought up,” Andrew Geschickter said. “I’ll do social media posts about it to fundraise there. Then email and reach out and text a lot of people. So, you know, I think it’s just important to make sure that, you know, he’s comfortable with it, which every year he’s been.”

Chet Geschickter described himself as a “proud papa” when his son said he wanted to ride in honor of his friend’s late mother and raise money for Dana-Farber.

“Andrew took it by the handlebars and has really done some amazing things,” Chet Geschickter said. “That’s what the event is about. It’s about coming together, setting high lofty goals, and making a dent in this terrible disease.”

Sikoryak said the team felt a sense of pride knowing the cause his teammate was riding for. Sikoryak said he went around and advertised the fundraising link to his friends and family to have more people chip in and raise money for Dana–Farber.

“It’s awesome,” Sikoryak said. “Not only did he ride in this challenge, but the cause he was riding for made it even better. We wanted to help out in any way possible.”

As Andrew Geschickter now turns his attention to his second season on the court for the Bombers, he said he is proud of what he’s accomplished and making a difference.

“At the end of the day, I’m just trying to do my part in making a difference in this fight against cancer,” he said. “I’m hoping I got a few more of these rides in me because it was a ton of fun.”