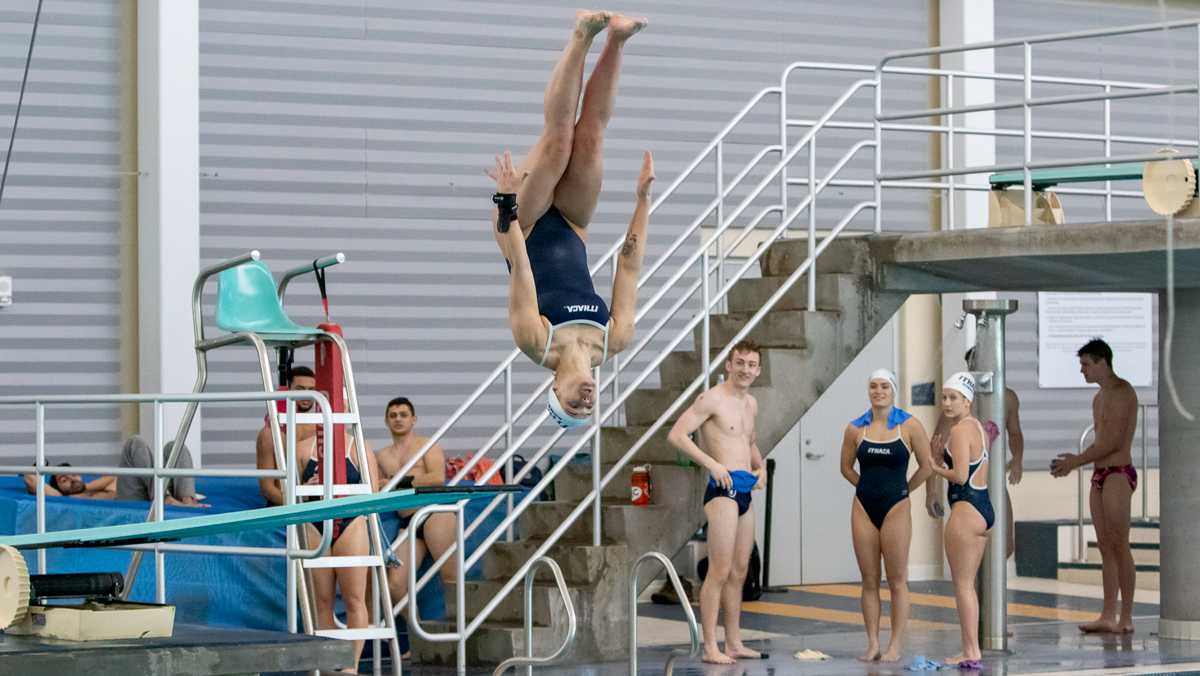 MIKAYLA ROVENOLT/THE ITHACAN
Junior diver Lindsey Duhamel performs a dive off of the 1-meter board during the Ithaca Invitational on Feb. 8 at the Kelsey Partridge Bird Natatorium.
By Emily Adams — Sports Editor
Published: February 26, 2020

Lindsey Duhamel spent the first two years of her college career as a member of the Ithaca College women’s soccer team. This season, she replaced her cleats with a swimsuit and competed for the women’s swimming and diving team.

Duhamel competed on the 3-meter and 1-meter diving boards at the Liberty League championships from Feb. 19 to 22 at the Kelsey Partridge Bird Natatorium. She posted her best score of the season on the 1-meter with a 327.35 in the preliminary round. She also had a personal-best score during the 3-meter preliminaries with a 342.20.

The women’s swimming and diving team collectively brought home the Liberty League title for the second year in a row. It came out on top by over 200 points after winning by less than 40 last season.

Sports editor Emily Adams sat down with Duhamel to discuss her first season with the swimming and diving team and her experiences at the Liberty League championship meet.

Emily Adams: Why did you decide to stop playing soccer?

Lindsey Duhamel: I guess I just was not as happy as I thought I would be. It was just my time to try something different, but I did not want to stop being an athlete. [Diving coach Chris Griffin] is my boss for lifeguarding, so that’s how I was introduced to diving. I came to the open clinic they have here and just kind of messed around and had fun, and Chris was like, “You’re not bad. If you want, you can do it.”

EA: Did you have any previous diving or swimming experience? What was the transition like?

LD: I swam in eighth grade, but that was it. The clinic definitely helped. The clinic is [open to] anyone and different age groups. So people from high school and younger are also doing it, so I wasn’t alone in the sense of being alone for the first time ever. I wasn’t the only one who was inexperienced.

EA: How did you adapt to competing in a new sport?

LD: It’s definitely different in many aspects, but I feel like I adapted pretty well. The team itself also made it really easy, and they were so accepting and open.

EA: Were there any skills from soccer that helped with diving?

LD: My leg power from soccer. I had a lot of power that just needed focus. I also did gymnastics when I was younger, so I had some of that experience with body awareness, so that definitely helped.

EA: What was the hardest part of the transition?

LD: The hardest part was just the mental capacity that it takes every day at practice. With other sports, especially team sports, you can go through on autopilot in a sense. I know that’s not the best thing, and you want to be focused 24/7, but there’s some days when you’re off, and you’re able to just get through a practice. With diving, you can’t do that. You have to think about every movement you make and your body control and the awareness you have in the air. That was a really big thing.

EA: Was it nice for you to have a lot of new divers on the team with you this year?

LD: We had, I think, seven freshman, and three of them were gymnasts who had never touched a board, so that was cool. We all learned together, and everyone progressed differently, but, at the same time, everyone was so encouraging. It was an amazing environment to be a part of.

EA: What is your relationship like with Griffin as a coach rather than a boss?

LD: He is hands down the best coach I’ve ever had in my entire life. He’s personable. He’s understanding. I had a really good relationship with him through lifeguarding and being at the pool all the time. I’m always chatting with him in and out of his office and having fun. He has a really good sense of humor, so he can relate to you. I also don’t like people to sugarcoat things, and he gives it to me straight. He’s able to tell me what I need and able to push me in the right ways.

EA: What was the experience like at your first Liberty League championship meet?

LD: It’s funny because I’ve been there and worked [the meet] for the last two years. It’s so different to watch it as a spectator and then to be a part of it. To be a part of it is so much more special, and it’s a feeling you can’t describe to a spectator. I was really happy with [my performances]. Having my best score on both boards was really exciting.

EA: What are you hoping to build upon for next season?

LD: My next goal is to make regionals next year. I’m just concentrating on that, and, now that I have a year under my belt, I’m more comfortable and I know what to expect. I know how I need to push myself to get to that level.