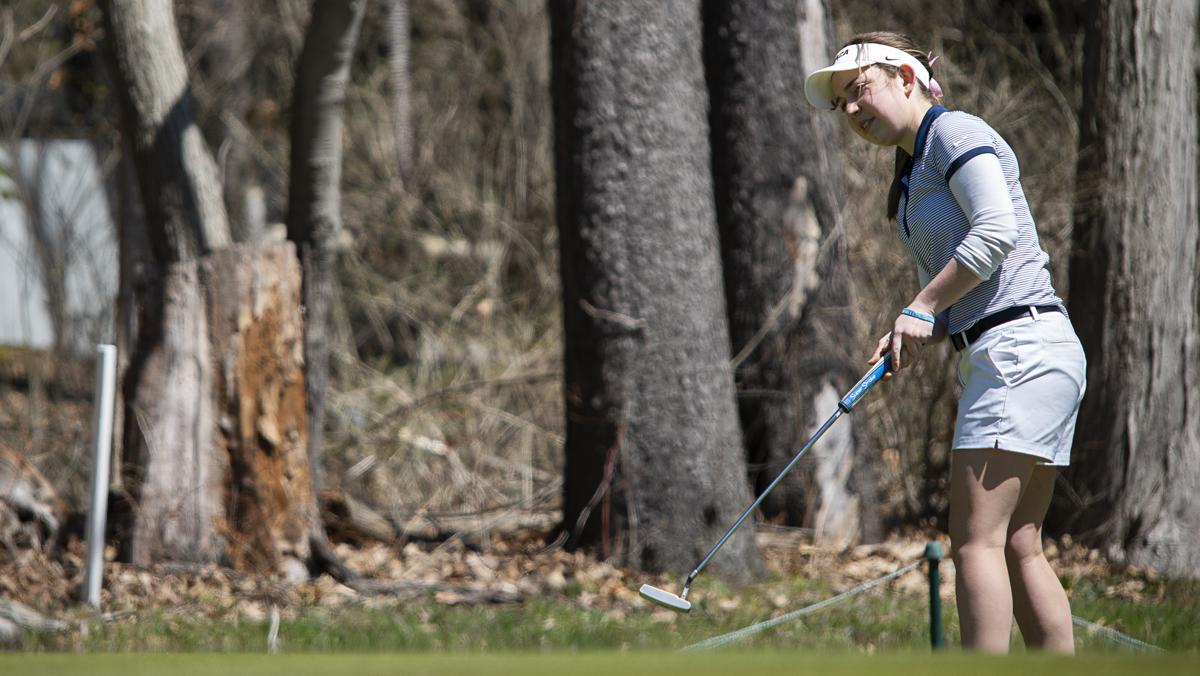 The Ithaca College golf team is facing a rebuilding year after losing three standout seniors from the 2018 season. Indiana Jones ’18 was the 2018 Liberty League Champion and was named Liberty League Player of the Year. Kyra Denish ’18 also finished in the top 10 at Liberty Leagues, and Lauren Saylor ’18 was 24th.

The team is 50 percent freshmen this season, and although it has not been as successful as the 2018 squad, it has performed well at its first two tournaments of the year, placing second at the Ithaca Invitational April 13 and 14 and sixth at the Vassar Invitational April 20 and 21.

Junior Peyton Greco is the most senior athlete on the squad and is the team’s captain. She has finished in the top 10 at both spring tournaments, placing third at the Ithaca Invitational and tying for fifth at the Vassar Invitational. Greco shot a career-best of 73 (+1) April 21 — the second day of the Vassar Invitational. She will attempt to improve upon her 13th-place finish from last season’s Liberty League Championship this year May 3 and 4 in Schenectady, New York.

Greco sat down with Assistant Sports Editor Emily Adams to discuss her leadership role on the team and her outlook for the remainder of the season.

Emily Adams: How is the team doing so far this season?

Peyton Greco: We have a super young team this year. We lost three seniors and we got three freshmen. I think the freshmen have done a really good job filling in the roles for the seniors and just kind of pick up where we left off. We’re obviously not as strong as having three seniors because the freshmen have to learn the ropes, but they’ve been doing their best with that and the results are showing, which is nice for them.

EA: How have you taken on a leadership role on the team?

PG: Coach [Keith Batson] told me over the summer that I would be captain, and I knew that it would be a little bit different compared to any other team because there were almost no upperclassmen. We had no seniors, no other juniors. It was really just the three of us returners. I really just tried to set the best example that I could by being a lead-by-example kind of captain. If the freshmen needed something, whether it was school–related or golf–related, just really vocalizing that they can come to me for anything. I think so far I’ve been doing a good job, and they do feel a lot more comfortable on the golf course and at practice, and I’m really excited to see where the team is going to go.

EA: Has it been hard to fill that role being only a junior?

PG: I wouldn’t say it was hard, necessarily. It would have been nice to have more upperclassmen on the team so that I’m not the only voice and having other people to talk to and communicate with. I guess it’s hard then because we don’t have the other older experience. I think my experience on the team and having such an old team when I was a freshman has helped me determine the best way to lead.

EA: How would you describe the team’s dynamic?

PG: I’d say it’s pretty good. Spring break really helped us because we were all in the same house for a week with coach and everything. We just really got a good dynamic going into the spring season, which is why I think we’ve been as successful as we have been. We’re all on the same page, working towards the same goals, and we all want to improve, so I think that’s really helped.

EA: What are you focusing on in training right now?

PG: Going into Liberty Leagues, we’re really focusing on short game, so chipping and putting. That’s, right now, where we’re losing all of our shots. We want to just put a lot of focus on that. If we put most of our practice time aside from just going out and playing or hitting balls on the range and put the emphasis on short game, we can definitely gain a lot of strokes and maybe place a little higher in these tournaments.

EA: What are the team’s goals for Liberty Leagues?

PG: I don’t know that we have a specific number goal. Last year we played really well, so to follow that will be a tough act. The goal that we have for the actual tournament is to go in understanding that every single shot matters, and every single person’s score matters. Just because you’re the one or the five going out, your score matters just as much. A three-foot putt is just as important as a 200-yard drive. Taking it in and enjoying it is definitely a big one, too. It’s Liberty Leagues — it’s supposed to be this postseason championship, and it should be fun.

EA: How do you expect the young squad to develop going into next year?

PG: We have three incoming freshmen, so we’ll have another super young team. I think that the freshmen from this year will definitely have a chance to continue developing, and the sophomores, who will be juniors, can also continue to develop and get more of a leadership role on the team. For myself, I have big expectations, so, hopefully, I can use my expectations and what I’m trying to reach to inspire the freshmen to go out and work their best for the whole year.